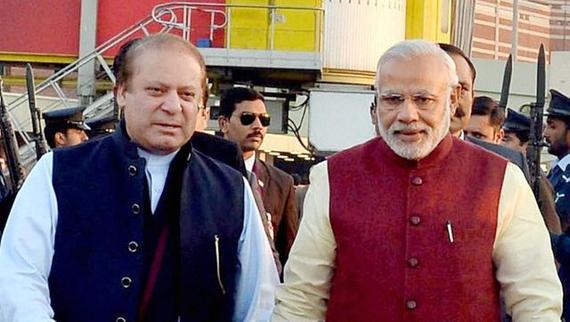 The Indian Prime Minister Narendra Modi wrote an unprecedented chapter of peace on Friday with his unanticipated visit to the neighboring rival Pakistan. He was the first Indian head of the government to visit Pakistan in more than a decade. While on his way back from Afghanistan, Modi took the whole South Asia by surprise with a tweet in which he announced traveling to Pakistan to wish his counterpart, Nawaz Sharif, happy birthday.

India and Pakistan, both nuclear powers, have fought four wars in the past six decades since their independence in 1947 and continuously live under strained ties. The army and Islamic extremists on the Pakistani side and the Hindu extremists on the Indian side resist normalization of diplomatic and economic relations between South Asia's two biggest nations. For the people on both sides of the border, a trip like that of Modi's, which was seemingly planned in one single day, is like a dream. Their citizens have to go through a months-long excruciating process to get a visa to visit each other's countries. Very few succeed in getting a visa while most applications are deliberately denied.

Modi's trip to Pakistan provides a glimpse of the great possibilities and opportunities if leaders of the two countries show willingness to resolve their bilateral disputes and work for regional peace and prosperity. India and Pakistan can accomplish much progress in almost every sphere of life if they take practical steps to maximize the enormous potential they have by working with each other. In spite of realizing what great results friendly relations can offer the two countries, progress has been outrageously slow in addressing the outstanding issues that have perpetuated mistrust and hostilities.

While Modi's gesture is commendable, he should not naively expect his Pakistani counterpart to reciprocate his surprise visit in a similar dramatic fashion. In spite of serving for a third term as the prime minister, Sharif still does not exercise full control over his country, especially with regards to the foreign policy toward India. It is true that obscurantist elements in India, such as the Shiv Sena, vehemently oppose cultivating friendly ties with Islamabad, the problem on the Pakistani side, nonetheless, is more complex because anti-Indianism in Pakistan has institutionalized roots, endorsement and patronage.

Dr. Stephen P. Cohen, a leading South Asia expert at the Brookings Institution, sophisticatedly describes the roots of anti-Indianism in the ideology of Pakistan in his book Shooting for a Century: The India-Pakistan Conundrum.

"The ideology of Pakistan has come under official state sponsorship -- it is a project directed at defining the Pakistani state and nation and specifying what good Pakistanis should believe in. This takes two forms: it contrasts Pakistan with India (always portraying the negative features of the latter), and it contrasts a unified, purposeful Islamic Pakistan with the negative tendencies of regionalism and separatism. This project, encapsulated in the constructed discipline of Pakistan studies, at its best inculcates patriotism, at its worst promotes stereotypical images of an evil and corrupt Indian state, a permanent threat to the purer "Islamic" Pakistan."

Hence, Pakistan faces a monumental challenge of discarding its deep-rooted anti-India mindset. I describe it as a "monumental challenge" because this mindset has flourished inside the country's unshakeable institutions, such as the army, the religious schools, and it found enormous space in textbooks at all levels. Sharif is too weak a prime minister to easily reverse these trends and policies. In fact, he serves under an intimidating army chief. General Raheel Sharif, the army chief, recently embarrassed the prime minister by visiting Washington less than a month after the prime minister's visit in an attempt to assert his influence over Pakistan's foreign policy. For the Pakistani military, there is a very high cost for normalization of relations with India: Its existence and sources of funding. The army has successfully justified its gigantic defense budget by preparing and promoting a national narrative that the Indians are out there to attack and dismember Pakistan and only a well-funded army can thwart such an invasion.

On the contrary, it should actually be the Indians who should fear the Pakistani army because even top Pakistani army officials also subscribe to crazy ideas that India can actually be destroyed with the help of Islamic terrorist groups such as the Lashkar-i-Taiba. While the Lashkar carried out the atrocious terrorist attacks in Mumbai in 2008, Pakistan's former army chief and the president, General Musharraf, recently told the BBC Urdu, "freedom fighters", while referring to the Jihadists, were not terrorists. Such overt backing of Jihadists from a former army chief and the president of a nuclear-armed nation should be deeply alarming.

Personal friendship between two prime ministers is good in initiating and furthering the India-Pakistan peace process but it cannot offer a long-term solution. The peace efforts should have institutional backing and legitimacy. In Pakistan, most political parties, the civil society and the media support friendly relations with India. However, all these civilian players in combined are not strong enough to redress the army's fears and reservations toward India.

Ultimately, one brave civilian leader will have to step in and challenge the military's narrative and position on India. That will require as much time as democracy itself to take full roots in Pakistan. From the Indian side, the issue of terrorism should not hamper contacts among the people of the two countries, sports players, musicians and members of the civil society. Every Pakistani who wishes to visit India certainly does not have terrorist plots in their minds. An increase in bilateral contacts will generate mutual trust and provide a roadmap to discuss and resolve the remaining disputes between the two countries.

The worst thing that can happen after Modi's "Birthday Diplomacy" is another interruption in two-sided communications. Modi's visit to Lahore was a big deal but it has also raised high expectations in both countries. The challenge now is how India and Pakistan will transition from this historic chapter to the next one.