At the State Environment and Forest ministers conference in New Delhi, Prime Minister Narendra Modi stated that the world has very little reason to pressure India to cut its carbon emissions. "The world will lay down the parameters for us and we will follow them, it cannot be. India should lead the world in the fight against climate change," he said. But there is very little in his rhetoric that indicates India's leadership on addressing this challenge.

The speech was spluttered with self contradicting statements that deftly obfuscate from the stark reality of climate change and why India's inaction can prove very costly to its people.

Here are some of those contradictions

Traditional vs. Modern Modi enjoys invoking the Hindu traditions and rituals that inherently view the natural environment with respect and bear little harm on it. He consistently hails ancient wisdom and the solutions they offer to challenges like climate change. "Environmental protection, worship and conservation are rooted in our culture. We don't have the right to exploit natural resources," Modi stated.

Frugality, resourcefulness, worshipping trees et al are some of those ideas he tries to reframe and re-apply to the modern world with very little practical sense. The Hindu mores and traditions offer values and principles to base our lives on but don't drive policies for the 21st century challenges that have emerged from a very different reality.

Modi's election to power last year has spurred off an aggressive fervour to celebrate Hindu festivals but unfortunately without the environmental sensibilities.

The conference, where Modi wielded his environmental rhetoric, is expected to result in the dilution of major environmental policies to give a free run for industry. Doing away with environmental clearances, revoking the rights of tribals to forest land, approving coal mining in dense forests; the list of policy changes the Government introduced has capital, not the environment or our traditional values, at the heart of it.

The irony persists in the recent statements made by the environment minister. Prakash Javdekar stated that India would reduce its carbon emissions if money and technology were given by the rich world. If our rich cultural history offers the wisdom and the practices needed to live sustainably, the dependence on foreign money and technology remains questionable.

"Can our urban agencies agree to turn off all the street lights once a month and instead depend on the light of the full moon?", asked Modi during his speech. "Our tradition celebrated the full moon, an act that can bring the community together and also reduce electricity consumption in the process."

The Prime Minister urges people to look inwards and question their own lifestyles to address climate change. He hits the nail on the head here. Consumption is indeed, at the root, the driver of carbon emissions. All economies with historically high consumption of resources have worsened the climate problem.

But to suggest that India is doing anything differently is an obvious myth. By coming to power on an agenda of development that is driven by the pursuit of ever higher GDP growth, Modi needs greater consumption of natural resources; applying the mainstream thinking of the 20th century that drove us to this problem in the first place.

We are unfortunately beyond the stage where small or individual action to change ones light bulb, turning off the streetlights, cycling to work on a Monday, carpooling or other lifestyle choices could address this challenge. Research based on the latest climate science suggests that to avoid catastrophic climate change, 82 percent of known coal reserves in the world should be left in the ground. For India and China, the study reveals that 66 percent of their known coal reserves should remain unburned.

This demands a dramatic shift in Government policy that favor sustainable development and reduced dependence on coal and other fossil fuels. Modi's Government is doing the exact opposite.

India vs. the rest of the world The world cannot dictate what India can or can't do on climate change, says Modi. With per capita carbon emissions of roughly three tonnes per annum, India pales in comparison to North America that emits more than 20 tonnes per capita. This is an obvious fact that supports Modi's statement and substantiates India's historical position on climate change at international negotiations.

What it belies is the gross inequity within India that results in a miniscule average in carbon emissions. As the third largest carbon emitter of the world, India's absolute emissions from domestic sources are rising but only a small section of the population is contributing to it. A recent study showed that CO2 emissions from urban households are 16 times higher than rural households. If that status quo remains, the real benefactors will be the SUV driving, condo living, air conditioned addicts that match the emission levels of the west but continue to hide behind the poor.

It is important to differentiate India's responsibility to the world vis-a-vis its own people. Climate change and extreme weather disasters that we are witnessing today are not India's doing but a result of emissions over the last century, largely produced by western economies. But India's growing contribution to the problem by increasing fossil fuel dependence will only jeopardize the lives and livelihoods of millions of its citizens, virtually assuring a game-over scenario for the climate.

Over the last 2 months, unseasonal rainfall and hailstorms have damaged more than 11 million hectares of cropland in India. Wheat output is estimated to drop 5%, distressed farmers are committing suicide and food prices are expected to go skywards for the coming few months. The brunt of these impacts are immediately felt by the poorest and the most vulnerable in India's diverse society as climate change continues to threaten their lives. These impacts are just a snapshot of what we can expect, only with greater severity and frequency, if global emissions, including India's, are not drastically cut. India's action on climate change should therefore be driven by an effort to safeguard its own people as opposed to a posturing that so far has only yielded in blame shifting.

Modi and his Government's spokespersons have been pursuing a method of debate that immediately boxes people into ideologies and scuttles the main discussion. Those who question certain projects in the name of environment are seen as being ideologically opposed to the Government and therefore unable to appreciate its efforts for development. The labels of anti development or anti national on a few individuals and institutions is a manifestation of this approach.

"To suggest that environment and development are at odds is absolutely wrong. Both can move together and co-exist", Modi remarked. He goes on to state the example of the coal cess that has been increased to Rs 200 per tonne of coal, a move that is aimed at offsetting the impacts of coal by enhancing clean energy usage. It is a positive move to raise money except for the fact that environmental protection, in no way, is guaranteed in this process. Coal production is set to increase and with weakening of laws to mine and set up power generation units, Modi is doubling down on natural resource exploitation.

Take the example of air pollution in Delhi. When CNG or natural gas was made mandatory for public transport, there was a visible change in air quality and the move was hailed by many as game changing. Less than two decades on, Delhi has turned into the world's most polluted city. Rapacious consumption driven by more private vehicles, dramatic rise in construction and greater number of polluting industries has increased the per capita wealth of Delhi but left very little clean air to breathe.

Irrespective of the political party in power, the development models that India has espoused pose an inherent risk to the environment. The current Government's alacrity to continue and expand this risk stands in conflict with Modi's hollow assurances of environmental protection.

Yes, the world doesn't need to tell India what to do because of our unique cultural value to the environment and our minimal contribution to historic carbon emissions, but neither can India's Prime minister continue to dwell in rhetoric and falsely lead the public into thinking he is doing enough to protect them. 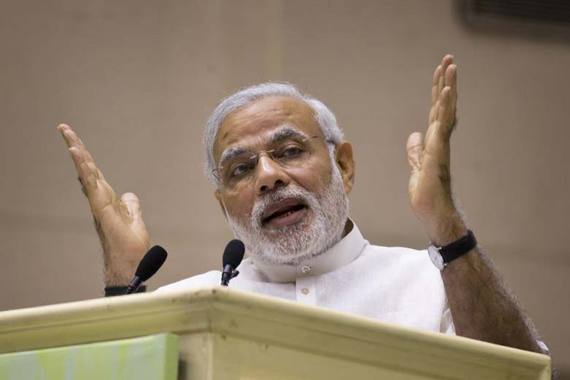