For decades, computer adventure games have been a dead art, but thanks in part to Kickstarter, we may be witnessing a revival. In 2012, renowned adventure game designer Jane Jensen caused a stir in the gaming community when she established her own studio, Pinkerton Road, with the help of Kickstarter backers. Best known for her groundbreaking Gabriel Knight series in the 1990s, Jensen has returned to adventure gaming with Moebius: Empire Rising, which is packed with promise for a series about its engaging lead character. The galvanizing theme music was composed by Robert Holmes, Jensen's husband, who is also a co-founder of Pinkerton Road, and composed the music for Gabriel Knight.

Malachi Rector, the protagonist of Moebius, is a misanthropic genius who evaluates antiques in New York City for upscale clients. Malachi likes money, owning the best of everything, and avoiding any emotional attachments. But the murder of a beautiful Venetian socialite precipitates a chain of events that take Malachi to locales like Venice, Cairo, and Paris. Forces of history are at stake, and Malachi finds himself reluctantly aiding a secret government agency on a mission--if only to work out why his own destiny seems intertwined with the outcome. 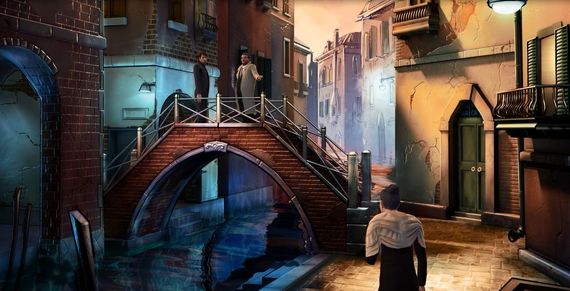 Jensen might have been the first game designer to approach adventure games as spiritual quest stories. Gabriel Knight's journey, while outwardly concerned with solving murders and fighting dark magic, was always about Gabriel's growth from self-centered party animal to a kind of hero, if always a flawed one. (And of course, the flaws are entertaining.) Even the already heroic Prince Alexander in the King's Quest game designed by Jensen undergoes tests of character and leadership that make him wiser before he can rescue his princess.

So it is with Malachi, whose biting wit (his lines are very funny) masks an emotionally stunted way of life. This first game is about tearing down the defenses Malachi has built so carefully to protect himself from relationships. Empire Rising introduces Malachi to David Walker, formerly of the U.S. military. Meeting under violent and mysterious circumstances, Malachi and David soon discover that they are fated to confront the relentless forces of history together.

The backgrounds of the game are beautiful and a pleasure to navigate. My personal favorite element might have been the idea of cataphiles in Paris--people who specialize, as a hobby, in exploring the city's dangerous and legally off-limits (and therefore alluring) underground catacombs. But the settings and backgrounds in all the places Malachi visits are rich in visual detail. The only things I'd hope for in the sequels are more challenging puzzles and longer run-time. Anyone who has explored New Orleans with Gabriel Knight knows that immersive, thought-provoking worlds are something Jensen does better than anyone. But with compelling characters and Jensen's sparkling writing, Moebius is an exciting new series to watch.