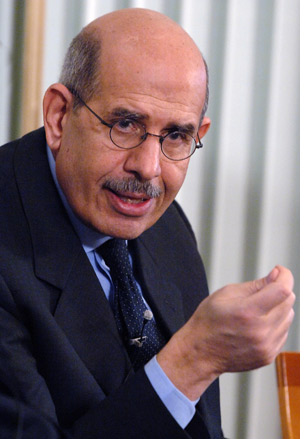 "Some people want to make it appear that we will wake up tomorrow and find that Iran has developed the bomb. This is not the case. Sixteen US intelligence agencies have said that Iran stopped working on developing the bomb in 2003."

Nobel Peace Prize winner Mohamad ElBaradei served three terms as Director of the UN's International Atomic Energy Agency. Prior to the US invasion of Iraq, he told the UN Security Council that according to their inspections Iraq was not in fact developing weapons of mass destruction and had abandoned their nuclear weapons program.

During his third term ElBaradei was commended by the UN Security Council and others for his "professional and impartial efforts" to resolve all outstanding issues with Iran. Speaking strongly against the use of force against Iran he has stated repeatedly that based on the agency's inspections he does not believe Iran is producing nuclear weapons currently and will not be capable of doing so for years to come.

The following interview, conducted by Mary Wald, Publisher of TheCommunity.com, is the second part of two. To read Part One click here.

TCC: Dr. ElBaradei, you've spoken of the need to separate politics from humanitarian issues in Gaza. Is any progress being made on this with the easing of the blockade?

MEB: No unfortunately, I don't think so.

I have always believed that civilians shouldn't be the victims. Innocent civilians are paying the price in Gaza. As is often the case sanctions do not affect the people in power. In many cases they actually make money out of it.

More than that, what message is this policy sending to the rest of the Arab world? Gaza went through one of the first democratic elections in the region. And they are reduced to rubble and its population starving because of sharp policy disagreements between their elected representatives and Israel and the West.

What message are you sending to the rest of world? Go through the democratic processes and if we don't like the outcome we will make you suffer?

When the Arab world sees this it creates a sense of humiliation. They are treated differently, with a double standard. They see Palestinian lands being confiscated and no prospect for the establishment of an independent Palestinian state but settlements being built, people being evicted.

When they look around it is only Muslims being killed in conflict. Look at Iraq, Afghanistan, Somalia and Darfur.

It's easy for extremists to say this is a conspiracy against Muslims. Then you start hearing about the "Clash of Civilizations", pending global confrontations.

It's bogus. These are not clash of civilization issues but down to earth political issues that need to be settled. And Gaza is one. It's not going to resolve by a blockade. It needs to be settled.

We all know what that solution looks like -- the pre-67 borders, share Jerusalem, resettle the refugees. This is where it will be solved. Not by creating more insecurity, not by more humiliation.

TCC: In January of this year you seemed hopeful that Obama could possibly negotiate a comprehensive package with Iran that could defuse the tensions over their nuclear weapons program.

Do you still feel optimistic about this, or is the window closing?

MEB: I was very disappointed with this last round of sanctions.

I thought the Turkish Brazilian package was what the West was looking for, that it could help to defuse the crisis.

Before I left office I had phone conversations with Obama and met with Ahmadinejad. Both were quite keen to have a comprehensive settlement of all outstanding issues between Iran and the US. The fuel package was meant to reduce the tension and create space for negotiation. This package would move about half of the fissile material out of Iran.

If they wanted to make a bomb, they are still few years away from that, and we still have time to negotiate.

It's important to understand that US Iran relations will not resolve through confrontation. Yes, there are a lot of grievances . But these will only resolve by building trust. And the only way to start building that trust is to get to the negotiating table.

We wasted a lot of time with the Bush administration's "preconditions" to negotiations, which said they would not negotiate unless they were given everything that was up for negotiation in advance of the negotiations. Obama has gotten the door open again by talking about mutual respect, negotiations without preconditions and addressing what I said earlier about the sense of humiliation in the Arab world.

Turkey and Brazil got Iran to accept a fuel deal that could be built upon through negotiations.. I was disappointed that the reaction was to have more sanctions, another round.

There is no other way through this than to get everyone sitting around a table -- and not waiting to see who blinks first. Both need to blink.

Some people want to make it appear that we will wake up tomorrow and find that Iran has developed the bomb. This is not the case. Sixteen US intelligence agencies have said that Iran stopped working on developing the bomb in 2003. But they are working to build the technological know how.

For Iran and other countries having the technology for nuclear weapons is more a matter of power and prestige. And it is an insurance policy. A country that has nuclear technology gets treated differently than one that does not.

Look at Kim Jong Il. The US is willing to sit around a table with him to find a solution, where they were not willing to do the same with Iraq. This does not go unnoticed. It creates a field where if you want to be a player, you should have nuclear know how if not nuclear weapons. For Iran, having nuclear know how is a means to force the West to treat them as an important force in the region. And they are an important force in the region.

You can disagree with Iran's policies. But my greatest worry is not about their government or other governments using the bomb. Any government today knows that if they were to use nuclear weapons they would be pulverized.

I worry much more about extremists getting nuclear technology because they will use it. To them the loss of life is religious martyrdom. They could use it. But the leaders of countries, unless they are completely mad, would not, as they know they would destroy their country in the process.

This interview is continued on TheCommunity.com. Please click here to keep reading.