For Mohamed Nasheed, former president of the Maldives, stopping carbon emissions and adapting to climate change is a necessity. The Maldives sit at an average height of four feet above sea level, making them extremely vulnerable to rising seas. Nasheed, the the first democratically-elected president of the Maldives, called attention to the issue in 2009 by holding the first ever underwater cabinet meeting. Dressed in scuba gear, Nasheed called on world leaders to cut their carbon emissions. He was also the subject of a 2011 documentary about his work on climate change, called "The Island President." 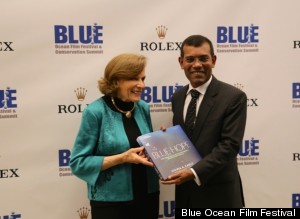 Nasheed's historic presidency was cut short in 2012 when he resigned under contested circumstances, and his bid for reelection in 2013 was unsuccessful. Since then he has continued to advocate for democracy and action on climate change. Last week Nasheed came to the United States to receive the Sylvia Earle Award at the BLUE Ocean Film Festival & Conservation Summit. He sat down with The Huffington Post to discuss climate change and the current situation in the Maldives.

The following interview has been edited for length and clarity.

What is the current political situation in the Maldives?
It’s in dire straits. On the one hand, we have the president not seen at all for the last two, three months. While there’s all this rumor mongering that the president is not well, but his office is not giving any clarity on this. So, therefore, there is increasingly a feeling of emptiness in the center of power, and I don’t think that is good for the country, democracy, or even for that region. So that’s one of the issues that has been in the limelight in the Maldives. The other is that we’ve had in the recent few weeks, in the recent few months, reports of so many Maldivians going to fight for terrorist organizations in Syria and Iraq. And this is an issue of great concern for all of us. But the government is unable to get a grip on the situation because they came to power with the help of the radical elements, and now they are having to succumb to their demands, they are having to facilitate them.

How is this affecting the country's work on climate change, and is carbon neutrality still a goal?
Well it’s not all lost, but if we had the moral authority in other issues, then we are a country that really could give leadership to climate change issues internationally. But because the government is locally unable to articulate on any issue and also our ranking in the human rights performance have slipped so many index numbers, in freedom of expression, we’ve slipped so many in the league tables as such. So it’s looking bleak, and again with the president being absent and absconding from his obligations as president, it’s been difficult for us to give any leadership in any of these issues. 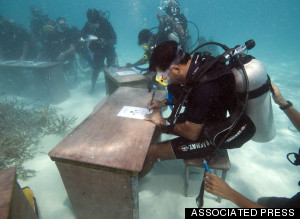 What would you say to countries that think going carbon neutral is useless without a binding international agreement?
Well we go carbon neutral because it’s economically viable, and it’s financially feasible. I would tell countries, if you want to be the leaders of tomorrow, you must embrace the future. The fossil fuel industry, or the internal combustion engine, is obsolete. It’s victorian technology, it’s not fit and it’s not efficient for the 21st century; it’s big, it’s huge, it’s moving, it’s cumbersome. So it doesn’t really quite fit in to the development patterns of the 21st century. So I would argue, or what I would suggest to other countries is, look, if you actually do sit down and do your sums, this is financially far more viable. Far more viable for energy security, and you have the resources, everyone has the resources, to do renewable energy. So it’s not just a humanitarian, an earth science issue, but it’s an economic issue, it’s a financial issue. So in my view it is the economics that should be driving decision making, and the economics is squared in these decision making issues.

You said in a HuffPost blog this year that you are a political conservative and an environmentalist. What would you say to conservatives in the United States that maybe don’t consider environmental issues as much?
Well there’s nothing more conservative than conserving the planet, and if you want to deconstruct what conservatism is, that very much maps onto good environment living and issues and policies. And I would argue again and again with conservative politicians as well, that if you look into the economics of it, this makes far more sense than what we are doing now. And another very important issue is, we will soon have millions of people on the move because of climate change and as climate refugees. 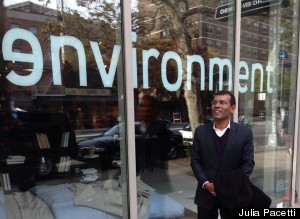 Do you think that an international agreement is needed going forward to make change on climate change?
International agreements will not happen unless local legislations and local… all politics is local. Unless people locally decide that there is gravity in the issue, it’s not going to be easy for us to come up with an international agreement. I would hope that leaders would lead and they would explain to their people, advocate to their people, what’s coming and what’s just around the corner. They need to have a vision and they need to picture that, or clarify that picture to the public at large. You can’t always be following the pack, leaders are supposed to lead and if you don’t do that sooner or later -- in my view sooner -- you are going to be losing because you haven’t done the proper and correct thing.

What do you hope to happen at the 2014 United Nations Climate Change Conference in Lima, Peru in order to set the stage?
I think not much, but hopefully they would bring some form of clarity to what might happen in France. So I’m very much looking at 2015 to see how we might be able to come up with a legally binding agreement on climate emissions. But also an understanding on migration, an understanding on getting, clarifying legal issues surrounding climate change impacts. What would happen to the people who have to move? Now, Kiribati for instance has decided to go to Fiji. Now what would happen to the former land of Kiribati? Who would have ownership of that land. And also because of climate change our coast is eroding, and therefore our international borders are receding. And so we need to address these issues as well, especially for ocean countries like the Maldives where fishing is important. If you lose a meter of the shoreline, and when borders are measured 200 miles from the shoreline, you would continuously keep on losing. So I think new conventions and international agreements need to hammer it out and bring ease to many, many people around the world. 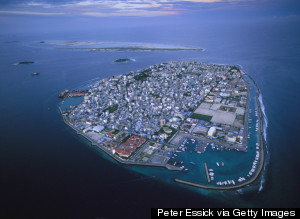 Do you think there there a “Plan B” for countries like the Maldives?
I don’t think there is a plan B because I keep saying there is no planet B. There’s no plan B, even if we wanted to leave people will not leave. We are not only talking about the Maldives, Manhattan is as low as the Maldives. Now, can you see all these people leaving this island? No, I can’t see that. And in my view they would go in for more adaptation measures, so we must be looking at more technology for adaptation.

You’re also trained as a marine scientist and just received the Sylvia Earle Award at the BLUE Ocean Film Festival. What do you think besides climate change are the greatest threats to the world’s oceans?
Using the oceans as a dumping ground. The amount of garbage, waste going into the oceans. Not just the huge islands of rubbish forming in the middle of the oceans, but also invisible waste going into these oceans. People are dumping all sorts of lethal chemicals coming from fertilizers, coming from the kind of living that we are living. And of course on top of all that ocean acidification, because of temperature rise, is having a very strong stress on the reefs. Reefs need the right temperature for it to thrive and survive. So we are losing the reefs, we are losing the biodiversity, and we are losing… the bluefin, just one example. The type of fishing that others are doing. The Maldives is fishing one by one, we do not purse seine, so our fishing is environmentally friendly. But when you do, when you huge big trawlers purse seining everything from the floor to the surface of the ocean, then half the time more than 50 percent of your catch is the catch that you don’t want to catch. And that is having a very negative impact on biodiversity. So the ocean has the fishing methods, ocean acidification, and waste.

What is next for you?
I want to keep on advocating on climate change issues. And also I’ve always believed that good governance is the most important adaptation measure, so I want to advocate for building political parties and other adaptation work. I want to concentrate more on how we may be able to survive now. For the Maldives, the deed probably is now done. The world is going to heat beyond two degrees. And that is going to melt the polar ice caps, and we will find a situation where seas will rise. So we must now find proper adaptation and again I would say financially viable adaptation measures.