In 2011, India witnessed unprecedented scenes of protest against what is undoubtedly one of the biggest challenges facing the worlds largest democracy: corruption. Angry citizens were up in arms across the length and breadth of the country, demanding widespread reforms through a bill in the parliament titled the Jan Lokpal. The bill never came to pass but the sickness continued to worsen. Corruption is so incredibly rife in the country that the best response to it has now become a shrug of the shoulders and a "Kya kare, aise hi hota hain" attitude (what to do? that is how things work here). Now with the general elections around the corner, every political party has taken a vow to eliminate corruption, an ideal that sees the light of day once every five years.

A recent case of political and moral corruption is the removal of India's now ex-environment minister Jayanthi Natarajan and replacing her with Veerappa Moily now jointly holds the position of the petroleum & natural gas minister. If ever the definition of 'conflict of interest' took an extreme turn, this would be it. Moily as the petroleum minister has a rich history of pandering to the interests of big corporations and to put him in charge of safeguarding India's environment is undermining the rights of millions of Indians. The Ministry of Environment and Forests (MoEF) has generally had a poor track record of discharging its duties. Since 2004, the government has given clearances for the diversion of over six lakh hectares of forests (over a third for mining). The rate of clearances granted has accelerated by the year. Till April 2013, MoEF's rate of granting clearances for forest land diversion increased by 42 percent on the previous year, while that of rejecting projects nosedived to a mere 3.5 percent. In the first three months of 2013, the MoEF's Forest Advisory Committee (FAC) allowed the diversion of about 15,000 ha of forest land, just a little less than the total forestland diverted in 2012. Veerappa Moily is now intent on breaking these morbid records in a matter of a couple of months.

His antics are simply exposing the corruption and deep nexus of big corporations and political power holders. Within three weeks of his appointment, Moily has cleared 70 pending projects worth 1.5 Lakh crores (25 billion USD) and has vowed to clear the rest very soon. His two big clearances came with the approval of POSCO's steel plant in Odisha that has been fought by the affected communities for the last 8 years and Reliance's Ultra mega coal fired power plant in Jharkhand. He has done away with the mandatory requirement of linear projects (i.e. roads and transmission lines) to gain the consent of local communities it affects, and has recently unnerved many an activist by suggesting that genetically modified crops can go on field trials.

In a nation of 1.2 billion people, 800 million of who are hovering around the poverty line, one would expect a democratically elected government to address the needs of those teeming millions but the interests of big corporations seem to outweigh and out maneuver every tenet of a functional democracy. The last few years in India have witnessed an onslaught on the environment like never before. The mainstream narrative was that the lack of swift environmental and forests clearances has put the brakes on India's economic engine, a sacrilege in the eyes of the leaders. But the actual research, however, had the exact opposite to reveal. In the 11th five-year plan of India (2007-2012), forest and environment clearances were given for a capacity addition of over 210,000 MW, a whopping 60,000 MW in excess of what is actually proposed till 2017! But in reality only 32,394 has been added to the grid so far. What is therefore baffling is the constant clamor for further clearances when the existing ones lie unused.

The environment and the rights of millions of Indians hang in the balance as India sees through some of its darkest days of corruption in governance. An ongoing petition is mobilizing public opinion on this issue as civil society at large is running helter-skelter to stop the madness of Moily. 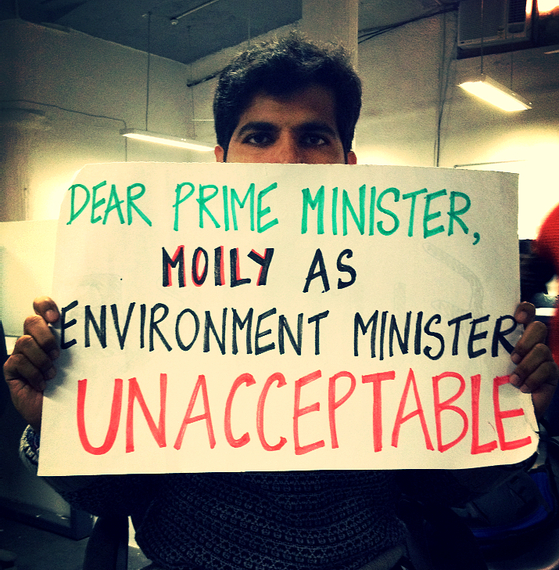