"It's not about the crimes or even the criminals. It's about how both affect the characters...how
they react to them. There is truth in their reactions."

That "truth" in which Cudlitz referenced, is even more astonishing given the fact that
NBC somehow thought canceling the show six episodes in was a good idea back in 2009.

NBC's loss has been everyone's else's gain since that time.

I could write some long, drawn-out expository piece on the superb writing of the TNT
cop drama Southland, or wax poetic on the exceptional performances given from each
and every member of its ensemble cast. Neither of which is really necessary, even
though both are true. This is a time when less is more... 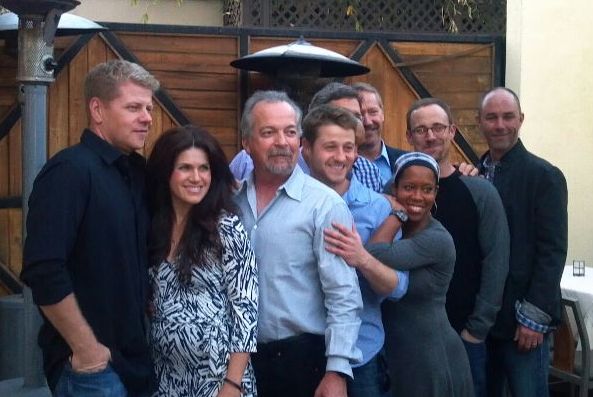 Southland is quite possibly the best cop action drama in a generation. It's not hyperbole
when it's true.

The ethnic and gender diversity of its cast is equally complemented by the diversity
of its writers. The authenticity of its presentation of life as an L.A. cop is no doubt
buoyed by diversity of its creative team and technical advisers. In some ways, the reboot
on TNT offered a blank canvas with a wider palette of color, hue and texture. The
imagery became more graphic, the dialogue more raw and both were undergirded by an
overall more daring brand of storytelling. There are just some stories better told amid
the freedom of cable, not constricted by the confines of network television. Southland
challenges you to like and loathe each of its supposed protagonists, each of them
fabulously flawed in his/her own way.

Now in the midst of its fourth season, the Southland team recently gathered for a minute to mingle
and mix with one another and a few from the media. Despite the hustle and bustle of The
Foundry in Hollywood, I was able to get a few moments with some of the members
of both cast and crew to hear what has made the series so successful and their collective
expectations for the future of the show.

Morris W. O'Kelly (Mo'Kelly) is a political correspondent for the BBC Radio and Television networks and author of the syndicated column The Mo'Kelly Report. For more Mo'Kelly, go to his site. Mo'Kelly can be reached at mrmokelly@gmail.com and welcomes all commentary.