A Virginia mother let her 7-year-old son wear a Ku Klux Klan costume this Halloween because, she insisted, it's a family tradition.

Jessica Black of Craigsville, Va., let her son, Jackson, dress as a Klansman with a floor-length white robe and full-faced white hood, according to local ABC affiliate WHSV. The outfit garnered media attention after a photo of the boy dressed in the KKK regalia was posted to the WHSV Facebook page. When Black was confronted by the news network, she defended her decision.

"My brother has [worn it] when he was in Kindergarten and when he was 13," Black said. She went on to claim there is nothing wrong with the costume or with the White Supremacist group, which she says still exists in their Virginia town. "It's supposed to be white with white, black with black, man with woman and all of that. That's what the KKK stands for." 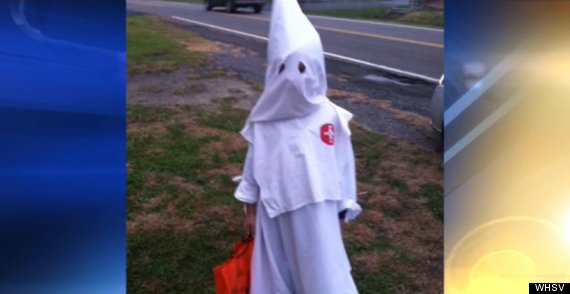 "A mini kkk costume??? In our area??? Sounds like something we should ALL be concerned about. #noroomforacistsonthisplanet," one respondent wrote on the WHSV Facebook page. Another defended the child on the station's "Daybreak" Facebook page, saying he probably thought it was a ghost costume.

Some users were angry that the town was being criticized for the act of one individual, but others criticized these people for missing the larger point.

"The fact of the matter is that this event could have happened anywhere in the US and you all being more outraged that your town has a bad name than the actual issue at hand is extremely disappointing," wrote one woman. "A few of you have missed the point completely. Just because we are in a new century does not mean that racism is a thing of the past. Racism is alive and well and if you opened your eyes, you'd see it clearly."

It's been quite the Halloween season for offensive costumes. First there was actress Julianne's Hough's major mistake of going out in blackface to portray "Orange Is the New Black" character Crazy Eyes. Then, two men thought it would be funny to go out as Trayvon Martin (in blackface) and George Zimmerman. And the latest adult to face backlash on Twitter is the young woman who decided to dress up as a Boston bombing victim.

So much for setting a good example for our kids.