I was recently carrying my screaming toddler under my armpit at the grocery store. It was dinnertime and the loud and messy meltdown showed it. As he kicked and pulled my hair, he knocked a can of soup out of the paper bag. It rolled across the parking lot and under an SUV, where I left it. I had bigger things to deal with.

I was not the only mom doing the witching hour shopping. But I did appear to be the only one with an emotional mess on my hands. I felt all the stares from the other moms, who, unlike me, were all walking into the store with well-behaved, decent-acting children. I was pretty sure I could just hear the unspoken questions, the comments they no doubt muttered under their breath:

"Who is this malfunctioning woman, beet-red in the face and carrying her baby like a week old bag of trash?"

"What is her other kid even doing? Twerking?"

In hindsight, I had probably exaggerated their line of thinking. I mean, none of the mothers in the parking lot were out to get me or even out to make me feel bad. But it's a habit of we modern moms. We're conditioned to feel the burn of judgment--or the defensive suspicion that we were being judged. It's something we've come to expect whether it's actually happening. We moms don't question the so-called "the mommy wars," which, whether reality or all in our minds, are responsible for causing a supposed on-going feud between all mothers. But I don't really buy the rhetoric that fuels explosive headlines and you shouldn't either.

I'm calling bullshit on the mommy wars. We women are way better than that. 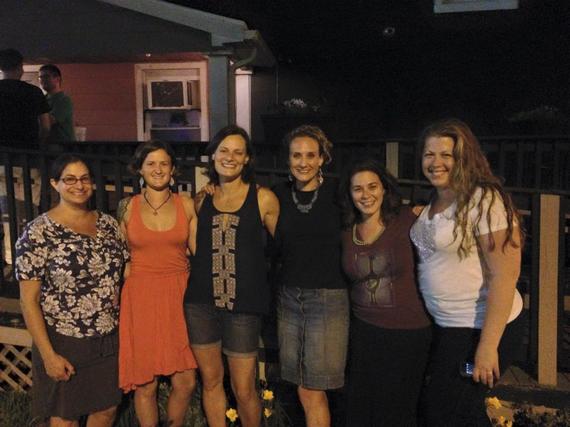 In fact, you'd be hard pressed to find someone who doesn't have opinions about one of the most important roles of all time. It just so happens that about half of those people are women. Go figure. But while all people--men, women, the young and the old--have thoughts and feelings about mothering, when mothers themselves have them, that is seen as fueling the so-called mommy wars. Having opinions about something that likely makes up a very large part of someone's identity is chalked up to being catty, vicious or downright cruel.

While some voices may be too loud or judgmental for our comfort, women's voices matter. I don't think most mothers inhabit these traits. In fact, I believe most mothers want to help, not hurt, each other. And while I, too, have on occasion felt judging eyes during a public tantrum or feeding, I have also been lifted up and supported during some of the most publically difficult times in my motherhood. In my experience, the good far outweighs the bad.

In times when I couldn't hide my exhaustion, I've had neighbors running over with pots of soup and lasagnas. Friends offered to come watch my (screaming) infant, so I could try and catch a nap. I've had kind eyes and gentle words sent my way when I felt like I was fucking everything up. While those public tantrums can certainly draw judgment (and who hasn't been guilty of that before you'd actually been there yourself?), it can also bring a world of unexpected compassion.

Have I been judged or criticized as a parent? Absolutely. But those experiences make up a small percentage of my journey as a mother. Most of them, I felt, were more glaring when I was a brand new mother who felt completely and totally in over my head--most of it was my own perception. Now that I'm a bit more seasoned, I either don't notice or maybe I purposely look the other way when someone does something that could make me feel less than I am. I know my worth as a woman and a mother. There is not too much that can get in the way of that.

Our perception of the mommy wars is a shame, because it makes us afraid. And if we are so afraid of being judged that we no longer share anything about ourselves as parents, we stop learning from one another altogether, which is the most damaging thing of all. Talking about motherhood makes everything easier. Will we sometimes disagree with one another about our parenting choices? Absolutely. But embracing those differences is what makes good friends and villagers. And in my experience, most mothers are or want to be exactly that.

When mothers stay quiet about their birth experiences, breastfeeding, bottle-feeding, working, staying at home, exhaustion and infant sleep, there is virtually no community of mothers to pull from, to seek help, advice or, occasionally, free babysitting. When mothers stop talking to one another, we wonder why everything got so damn hard. It's no wonder people say there is no longer a village. We are too afraid the village is an angry mob of mommies carrying around a diaper bags full of insults. Instead, we pave our own way, keep our heads down, our feelings and thoughts to ourselves. And it's a sad, lonely journey.

Mothers have opinions about motherhood, this much is true. But let's not perpetuate the stereotype that every time we disagree it's out of judgment or cruelty.

While some voices may be too loud or judgmental for our comfort, women's voices matter. They need to be heard whether they're discussing politics, work, marriage or motherhood. We all deserve a powerhouse of mothers to pull from. I'm lucky to say that I have one. I have parent friends who I can actually talk to about parenthood without fear, without judging, without labels. Do we do things 100 percent the same? Far from it. Some are nurse their 3-year-olds and some never nursed a day in their life. Some work outside the home, and some take care of their kids all day. Some even run home daycares. But I learn from each and every one of them.

Once in awhile, someone ruins the village for all of us and gives us all a bad name. But just because another mother has, on occasion, hurt my feelings, it has not made me believe that all mothers are part of this yelling, screaming, bickering, belittling, unending argument called "The Mommy Wars." Sure, it might exist in some form, but it is absolutely not how most mothers are spending their time. They're too god damned busy! I believe most mothers are well-intentioned and compassionate. I believe most mothers feel strongly about motherhood. But most importantly, I believe those things can and do exist at the same time. Where the angry mob is, I'm not so sure.

Mothers have opinions about motherhood, this much is true. But let's not perpetuate the stereotype that every time we disagree it's out of judgment or cruelty. We have so much more to give to each other than that, but we can't do it if we're so worried about "The Mommy Wars" that we shut down the conversation before it begins. The thoughts and feelings of mothers are, quite simply, more important than that.

Find Sarah Bregel's personal blog at The Mediocre Mama.com. To stay up to date with her posts, join her growing Facebook community or follow her on Twitter, @SarahBregel.

More:
MotherhoodWomenParentsfriendshipFeminism
Newsletter Sign Up
Raise the kind of person you'd like to know
Subscribe to our parenting newsletter.
Successfully Subscribed!
Realness delivered to your inbox