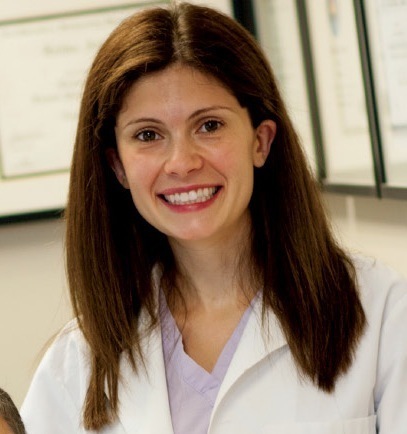 Dana Fort's idea for the Poopoose diaper changing table could very well be the "crowning" achievement of her dental career.

When Did Your Aha Moment Come for Poopoose?
The idea for my product came one morning as I was getting ready to go to work. I have two young daughters (two years old and four months old). When my oldest was around six months old she started to become very mobile. As a first time mom I was excited to watch her crawl and roll on the floor, but when it became time to change her diaper, her moving became a real problem. She would scoot up on my changing pad as I was trying to change her diaper and try to roll over. She just couldn't sit still. Then, one morning with a particularly messy diaper she rolled over, covering me and my scrubs in baby poo while almost falling off the changing table. A few expletives later, I called my husband, an ER physician, to tell him about my morning. He became irate, telling me I had to be more careful as he sees many infants with skull fractures in the ER, mostly from falling off furniture. All it took, he said, was three feet. I felt frustrated from almost dropping my daughter and from having to wrestle our baby every diaper change. I became even more frustrated that our changing pad designed with safety straps wasn't doing a very good job of keeping my kid still or safe.

What Were Your First Steps Taken After Your Aha Moment?
Between dental patients that day I went on Google, trying to find different changing pads or products that could keep my baby still and I didn't find much. I started googling how to make changing a diaper easier and I found many moms in the same boat, but no real solution.

Many had pointed out the same inadequacy of their changing pad's design and some had suggested giving the baby a toy or reading or singing to the baby during the diaper change, but I knew this would not help keep my baby still.

I then thought about making these changing pads like they make dental papoose boards. In dentistry we use these long, hard boards with velcro straps to help keep kids still during procedures. They're modeled after cradle boards native Americans would use to transport their babies. I then started thinking of how I could turn my changing pad into a makeshift papoose board. I found my elastic postpartum corset, cut it in half, took a knife, a yoga block and turned my pad into a very primitive version of our product. And... it worked!

I showed my family, and we joked about my "Poo-poose." My aunt and uncle were visiting, and they mentioned it seemed like a great idea. "You know," my uncle Pete said, "this might actually sell." Working as a VP for A.C. Nielsen, I took his opinion to heart. They even liked the name.

When You Can't Let Go Of the Idea:
After deliberating for several months, I decided to start reading books about products and inventions. After a lot of self doubt and questioning myself, I decided to look into filing a patent.

It's not easy starting a company, but not for the reasons you would suspect. Sure, filling out paperwork is a pain and it's not easy to find the right supplier to work with, but the hardest part for me isn't related to the business at all. It's the fear of failing.

Overcoming The Fear of Failure:
It's the self-talk and doubts about whether you should pursue your idea that stop many entrepreneurs. I was worried that I'd look foolish if people didn't like my idea, that I'd waste my time and money and be embarrassed.

In dentistry we're trained to be perfect in everything we do. There isn't a lot of room for misdiagnosis or mistakes. We're taught everything about dentistry in dental school, but nothing about business. So, I decided if I were to pursue my idea, I better try to learn as much as I could. I started reading every book, blog, and article I could about bringing a product to market. By this time I was pregnant again, and it was hard trying to juggle starting a business with a husband who was busy with his own medical residency, and a toddler. So google and my smartphone became my best friends and my confidence began to grow."

The Next Step Is Usually Becoming Obsessed:
"Yes, I was that mom at the park reading about cad/cam, product liability insurance, and materials on her phone. I would shoot emails back to my suppliers while pushing the swing and sometimes I would get dirty looks from other parents at the park. But I was doing the best I could. I would also get a surprising amount of work done at my dental practice. It's amazing what a few focused uninterrupted minutes can mean in terms of getting things done. I think being a mom makes you good at being able to multi-task. You are always trying to make dinner, do the laundry, keep the babies safe, and take a shower. So when you do have time to yourself, you tend to make it count."

Dealing With Manufacturing:
I was fortunate to find a large foam manufacturer in Chicago who was willing to meet with me to hear my idea. They were enthusiastic after our first meeting, but at the beginning of the second meeting, they started to doubt whether I should pursue my idea at all. "We don't want you to make this product and for nobody to buy it." They told me a story of another girl who had an idea to create a pin cushion to make sewing easier, and how her product never really took off. They shot me down... I lost it. I was furious. I had just built up my confidence to move forward!

I was used to being straightforward and wasn't prepared for people telling me one thing and then changing their minds. They had wasted my time and I wasn't about to let them waste any more. I promptly got my stuff together and headed toward the door. I don't know if it's because he saw the determination behind my anger, but he stopped me before I left and changed his tune. We've been working together since then without incident, but it reminds me that not everyone is going to see your vision right away but it's critical to be upfront with your intentions.

The contractor for sewing was found locally on google, and I was fortunate to find a mentor in the owner of the company, Adam Lava. Although Adam's company handled huge accounts (they were responsible for creating all of the beds for Serta and Sterns and Foster), he was willing to work with me, even on a tiny initial order.

In his words, 'I never say no to an opportunity, because you never know where it will lead.' They were instrumental in helping me finalize my design for my product and also for helping me plan for the future in expanding our line of products.

I've also learned a lot through joining a business group on Facebook geared towards women in business, and specifically, moms who have invented products. They have been a tremendous resource in contacts and in terms of all the questions associated with bringing a product to market. It was exciting to meet many of them in person at the ABC Expo, the largest trade show in the juvenile products industry where we exhibited for the first time a couple weeks ago.

Building the Business One Diaper Change at a Time:
We have started selling locally in Chicago and also on Amazon. The response is terrific and we are making sales. We receive positive feedback from our customers, which motivates me to find new ways to market our product and keep going. We have been focused on grassroots marketing through blogs and will participate in a magazine giveaway in the January issue of Pregnancy and Newborn Magazine.The demand is there and I am excited to take our product to the next level.

Handling everything has been challenging at times now that I have two kids, but it just forces me to be more productive with the time I do have. In my dental practice I focus on the patients in front of me at the moment. The bulk of this business is handled when my kids are napping or sleeping. But for me, the key is that it doesn't feel like work. Learning all these skills unrelated to dentistry has been so invigorating.

I enjoy meeting new people outside of my profession and learning more about manufacturing and marketing helps me understand my patients in those fields a little better. Many business lessons I learn also translate to our dental practice as well.

Advice For Others:
My only regret is not starting this process sooner. My advice to others is to just go for it, you never know where it will take you. You might succeed or you might fail. Some people will love your product others may not but you will learn a lot on the journey and sometimes that makes all the difference!

Currently Poopoose is sold on Amazon and some independent retailers. After exhibiting at the ABC Kids show this month, Dana also has new clients and opportunities that she's sifting through as she continues to work on both careers.