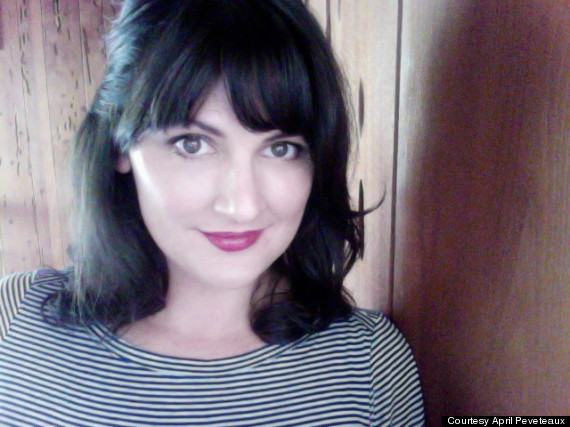 April Peveteaux possesses a quality of southern warmth accented with a subtle sophistication . Her height and beauty could easily land her on the cover fashion magazine and her humor will have your belly aching from laughter. However, for this mom an achy belly is no laughing matter. But these day she's having her cake and happily eating it too. Not even celiac disease could keep her from enjoying her favorite foods. When I met April Peveteaux, her otherwise comfy chic outfit was adorned with a button that read Fuck Flour. Knowing that she was a mother of two, I have to admit that my first thought was "Who's watching the kids?," but it soon became clear to me that this mom was simply keeping it real for all those with celiac disease who're just trying to enjoy a little goodness every now and then. Peveteaux and her wickedly funny sense of humor is just what all those gluten-free celiac suffering Americans need, to fight another day. She's changing the world one recipe at a time for all who eat a cookie and nearly crap their pants. Don't fret help is on the way!

Several years ago, during a very hectic time in her life, Peveteaux found herself deathly ill. After a bout with food poisoning, she continued to exhibit symptoms of exhaustion and severe pain. One evening she found herself in the emergency room where the doctors discovered that she had celiac disease.

Peveteaux says that the symptoms for celiac disease have a way of disguising themselves as more commonly experienced illnesses, and in spite of today's gluten-free food trend, doctors still frequently fail to test for it. Her mother, for example, experienced a rapid decline in her health and memory that were actually linked to undiagnosed celiac disease. While it is challenging to monitor the diet of a nursing home resident with dementia, she does everything she can to help her mother. As a mom herself, Peveteaux believes that it is crucial for parents to be informed about celiac disease. She has seen cases in which undiagnosed children have suffered from diarrhea, vomiting and failure to thrive. Once the disease is identified, changes to the child's diet can be made quickly.

Making such changes to her own diet brought Peveteaux into conflict with her traditions. Born and raised in Texas by a Cajun dad, Peveteaux is a foodie deep down, and she couldn't imagine a life without dishes like baked shrimp etoufee, cowboy crepes and chicken-fried steak and gravy. Peveteaux's book and blog, Gluten Is My Bitch: Rants, Recipes and Ridiculousness for the Gluten-Free, was borne out of her desire to eat waffles, pancakes and fried chicken without dying.

This Cajun mom has done something ingenious; she has created a way for those with celiac disease to continue to enjoy their favorite and even decadent foods. No one has to suffer in pain or with the pain that comes from believing that you can never eat pancakes or fried foods again. According to Peveteaux celiac disease also doesn't mean you have to join the vegan or paleo food camps. Peveteaux wrote this book to support those like herself, who have celiac, which is a serious and life threatening autoimmune system disease. In the meantime there happens to be gluten-free trend spreading across America, which Peveteaux appreciates because she has more choices when eating out. She says the difference between those who are gluten-free and people with celiac disease is that those with celiac have shame when they announce they can no longer eat gluten, while the trendy dieters have glee. Regardless Peveteaux is grateful there are other annoying groups like the vegans and paleo folks who send a dinner party host scrambling to find foods they can eat.

Peveteaux acknowledges that the recipes in her book are not for your everyday enjoyment if calorie counting is on the top of your list. With recipes like German cream cheese brownies and deep-fried broccoli & black bean sauce, Peveteaux was hell-bent on re-creating the comfort foods she loved eating when she lived in the South. And she admits that some things just don't work -- gluten-free flour simply doesn't make a good croissant or donut. With her book, Peveteaux has taken the great American Southern diet and made it accessible to those who have celiac disease. "I'm no vegan," she says. Gluten is her bitch, and she refuses to let it be her barrier to enjoying the cuisine of her heritage.