Moms' Night Out is a great movie for the entire family.

Crowds of moms, who also live as sisters, wives, and daughters, can come together, enjoy a good laugh and be reminded of a healthy truth: Our worth is not defined by status or employment but our worth is that we're human. 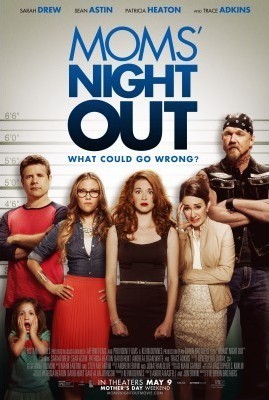 When twenty-somethings "Allyson" (Sarah Drew), fails as a writer and finds herself constantly overwhelmed in raising her three children (each under eight years old), she plans a moms' night out with her two friends, a pastors wife named, "Sondra" (Patricia Heaton) and Allyson's friend from childhood, "Izzy" (Logan White).

Their personalities and bonds with each other are established through settings at their local church. But also through a live streaming video they all love to watch, of an eagle's nest in Florida where a mother eagle can always be viewed watching over her eaglets.

The writers and directors of the film do a great job setting up Allyson's character as an overly concerned "neat freak." She struggles to keep a clean and orderly house amidst running and screaming kids who like to destroy the kitchen by cooking surprise meals and practicing their Crayola art on the living room walls.

Allyson's understanding husband "Sean" (Sean Astin), who lives on the road as an architect, agrees to stay home for the weekend and watch over the kids. After all, Sean did come home to find the kids in bed but an exhausted Allyson passed out in the bedroom after having eaten an entire box of gourmet chocolates.

Patricia Heaton plays an excellent role as "Sondra," the pastor's wife and mother of a dramatic and unhappy adolescent daughter. Sondra has learned to see the good in the chaos, serve as a mentor to Allyson, and to laugh and roll her eyes at appropriate times -- such as the complaints of a naïve teen, the midlife crisis of a husband, and stereotypical church ladies who can point out the splinters in other's lives while ignoring the forest in their own.

When Sean, Izzy's husband, and Sean's best friend (single, irresponsible, and whose highlight of the day is playing violent video games) agree to watch over the kids, hilarious disasters break out as soon as the women leave home.

When moms' night is inevitably ruined, Allyson collapses in tears and confides in "Bones," a biker played by Trace Adkins who likes to recall his wild times at Woodstock. Allyson talks about being a child and dreaming of motherhood. Her visions were all romantic and idealistic. But now she's unhappy and feels worthless, especially while comparing her life to the stories of successful women in the corporate world which she reads about in magazines.

Bones reflects on his love and admiration for how hard his single mother worked to provide for their family, how she made sure to tuck him in at night and be there when he woke in the morning. His fondest memory of her was this: his mother loved him. Not her title or occupation or accomplishments in life. Her love is what he remembered and cherished.

Bones reflects on the life of the eagle depicted in the live video. How her role is simple and beautiful -- raising and watching over her eaglets. What can be misunderstood as the filmmakers pushing a traditional "women should stay at home and raise the kids" message is missing the point of the film.

As I watched this film, I couldn't help but think of psychiatrist Victor Frankl and his book Man's Search for Meaning. His conclusion was, when we are stripped of our social statuses, jobs, and possessions, where we find meaning in life is through two avenues. 1) Loving and receiving love from others. 2) Finding a life purpose.

I believe the writers and directors of Moms' Night Out taught this very same message. I read some of their interviews and they said they wanted to make a movie that honored mothers. I believe they did.

My mom said she wanted to watch the film with her mother and three sisters. If they go, I'll buy their tickets.

Moms' Night Out. A film worth watching.