I have sat down to write this letter dozens of times and always end up a bit tongue-tied. Please bear with me as I attempt to explain myself. Nine years ago I watched the image on a sonogram and heard the words from my doctor: "It's a boy." In that moment, my first emotion was fear. How was I going to raise a man? It seemed daunting, but perhaps nervousness is not uncommon for mothers of sons to experience. I also felt extremely aware that as a Caucasian woman having a son with a man of African American descent, my son would undoubtedly face issues in his life I would never fully understand ... deep breaths ...

Truth be told, I was unprepared for the powerful love I felt when I held him for the first time. He was perfection, the way all newborns are. He was mine and any hesitation or fear about mothering this little tiny man was replaced with adoration and love. I am blessed to have a loving husband by my side who is also a wonderful father. Our son (and two other daughters) have been lucky to grow up loving two parents of different ethnic backgrounds. And yet there has always been the element of the unknown. Neither my husband nor myself would ever be able to entirely comprehend what it felt like to grow up bi-racial child in a world that is not always embracing of things and people that are different. I was faced with trying to figure out how to prepare my son for issues that he may face in his life due to his ethnicity that I had no firsthand experience with.

The election in 2008 had a profound effect on our family. As you pursued your dreams and became the nominee for president, there was a shift in the air. I was overwhelmed with the implications your success had for my children's lives, particularly for my son. We watched the debates leading up to the election as a family. I lined up three small chairs and made the kids popcorn (admittedly, a bit of a bribe for them to sit and watch something they did not really understand). I explained that although they may not understand what they were watching, it would have an important impact on their lives, regardless of the outcome of the election.

We were watching history unfold, a story that had a direct impact on our children. I felt this was especially true for my son because he could see himself in your face.

He was 5-years-old at the time you were elected president. And although I realize you were in the midst of pursing your dreams, you inadvertently simultaneously changed my son's life. Quite frankly, I believe you changed the lives of sons across the world. This, Mr. President, is no small thing. My son could see himself in you, the leader of our country, something no child of color had been able to do in America prior to your presidency. He was at an age when he had just become aware that my skin did not look like his. You gave my son in this moment something I could not.

My son is vibrant and funny, an incredible athlete, a well-balanced mix of tenderness and independence. I've loved him and raised him to the best of my ability. You gave him something that I could not, the possibility that he could actually be anything he wanted. This is a concept that far surpasses any political orientation; it is not a Republican or Democratic concern, it is purely an acknowledgement of what all mothers want for their sons -- an opportunity to pursue their dreams, to be anything they want to be. Mothers of mixed-race children are often confronted with the limitations that subtle and sometimes not-so-subtle prejudices can bring.

As a photographer, I felt compelled to share visually in some way, the impact you and your political success had on my son's life. I think perhaps this image says it, far better than my words could ever convey. I do not know where his dreams will take him, but I do know that the path you carved in your life will benefit him as he grows as a man, in ways he will probably never fully understand. I realize the possibility of my son and/or myself meeting you personally is quite unlikely. So I wanted to take this opportunity to share my gratitude. 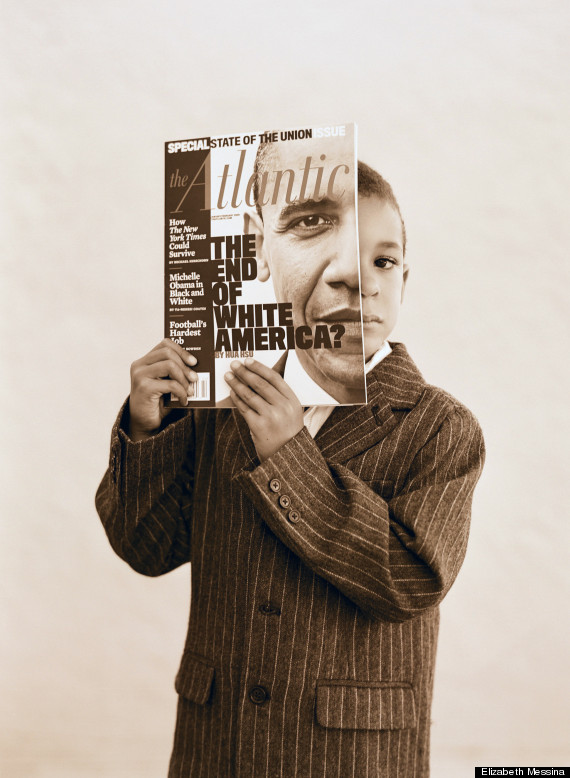