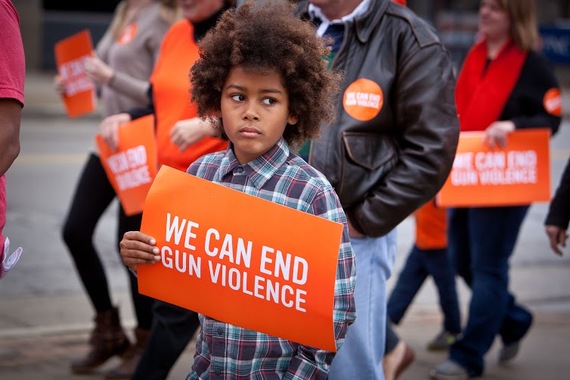 A new year and the same fight exists in the United States with more than 1,000 gun-related deaths as of February 2016, close to 60 injured or killed children ages 0-11 and over 300 teens injured or killed. Mothers are having to bury their children prematurely from violent deaths--dreams unreached, a horrific reality that has become an all too often occurrence in society.

And even amidst the tears and pain, mothers are banning together in large numbers and massive diversity across the United States lobbying for stricter gun laws, spreading love and hope on some of Chicago's toughest streets and sending the message that action is needed now.

"We can end gun violence," shouted mothers and community members of Central Illinois Moms Demand Action for Gun Sense in America on a warm December day through the quiet streets of Champaign, Illinois. Decorated in orange in unity with other Orange Walks that took place across the United States on December 12, 2015, community members and families--children, mothers, and fathers held up orange and white signs calling for an end to gun violence as onlookers looked quizzically at the display. 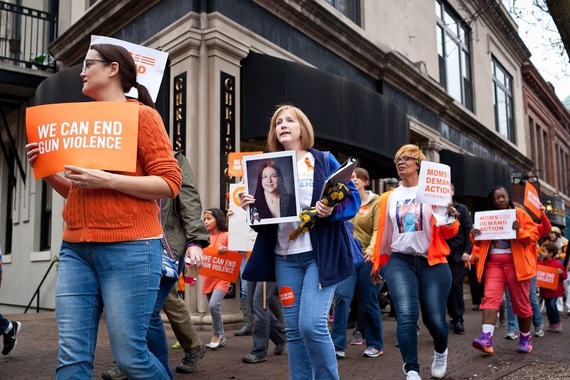 "End the silence. End gun violence," they repeated. They walked through Champaign, Illinois streets, eventually ending their rally at the local police department where one mother shared personal stories of her loss to gun violence and commitment to ending it.

Speaking to community members at the police station, Mary Kay Mace, mother of Ryanne Mace, held up a photo and shared fond memories of her daughter who was shot and killed in a Northern Illinois University Classroom. She shared how her daughter aspired to be a mental health counselor.

In the front row of the room in the police station, mother, Mary Brown-Smith, sat listening too grief-stricken to speak, visibly shaken about the death of her son Rashidi Overstreet shot and killed in Champaign, IL in 2014.

Manasseh, of Mothers Against Senseless Killings (M.A.S.K) in the Englewood neighborhood of Chicago, discussed the death of her daughter's schoolmate as an igniter for her to do something to help her home community that is affected by gun violence.

"It took me a lifetime to get to the beginning of M.A.SK," she said about her journey starting the organization made up of volunteers who cook and spend time with Englewood residents on some of the toughest streets in Chicago. Originally from Englewood but having left as an adult, she mentioned her concern "became full blown terror" after the death of teen Hadiya Pendleton who was shot and killed in Chicago a week after performing at President Obama's Inauguration. Manasseh further stated that it takes a collective effort to combat gun violence.

As part of the University of Illinois YMCA Lecture Series, "Breaking Down Racism: Fighting Racial Injustice in the U.S., Manasseh spoke to a diverse crowd on January 29, 2016, members of Central Illinois Moms Demand Action for Gun Sense in the audience in solidarity of fighting to prevent gun deaths.

Lauren Quinn, a mom and local leader of the Central Illinois Moms Demand Action, introduced Manasseh at the University of Illinois YMCA event.

"It is so frustrating to see the number of shootings, not just mass, but also everyday shootings," Quinn said when discussing her role in fighting for better gun laws. She also added that she can deal with tragedies related to gun violence better knowing that she is involved in her role with Mothers Demand Action for Gun Sense in America.

And as numbers gun deaths in America reach over 1,600 as of February 2016--over 300 in Chicago alone shot, it is clear that mothers around the nation are not willing to accept their children or anyone else's children being violently shot and killed as a norm. Mothers are keeping hope that one day there will be an end to gun violence.