Americans are getting used to the withdrawal or severe restriction of drugs "previously thought safe." From last year's Avandia warnings to the withdrawal of Vioxx, Bextra, Baycol, Meridia, Trovan and Fen Phen, "Pill Buyer Beware" seems to be a shrewd stance, especially when a drug is new.

Still, the parade of heart, liver and muscle complications seen with withdrawn drugs has lacked the side effect that sends shivers down the spines of consumers, regulators and drug-makers: birth defects.

But this month FDA issued a warning that pregnant women who take the antiepileptic drug Topamax are 20 times as likely to have their babies develop cleft lip and cleft palate as they would otherwise be, says Reuters. Children are three times as likely to develop the facial anomalies as infants exposed to other seizure drugs, adds the Associated Press.

Johnson & Johnson's Topamax is FDA-approved to treat seizures and migraine headache. But like the off-label marketed seizure drugs Neurontin and Lyrica (for which Pfizer paid massive fines), J & J agreed to a $6.1 million fine for illegally marketing Topamax for psychiatric conditions, less than a year ago.

And the marketing worked. Thanks to J & J's subsidiary Ortho-McNeil's "Doctor-for-a-Day" scheme in which it paid outside physicians to call on health care providers along with sales reps and speak at meetings and dinners, according to the AP, Topamax made J & J a cool $2 billion a year by 2006. (A lot less than the $6.1 million it paid in criminal fines for the marketing that made the $2 billion.)

Thanks to wide marketing, Topamax has become such a catch-all drug in the military for general pain conditions and other unapproved uses (often in untested psychoactive drug "cocktails" which are now under investigation) it's called "Stupamax" because of its brain-fogging properties says Army Times. 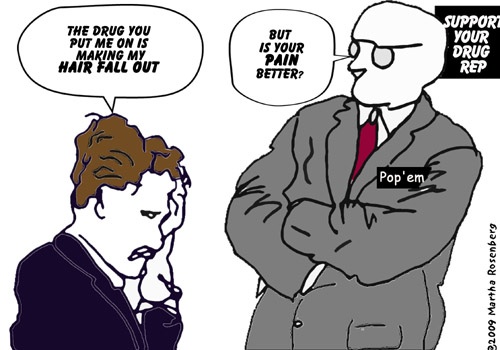 Nor is this month's alert the first safety warning for Topamax.

As early as 2004, the FDA warned J & J its sales materials downplayed the "serious side effects associated with Topamax, including oligohidrosis (decreased sweating), hyperthermia, and metabolic acidosis," a violation of the Federal Food, Drug and Cosmetic Act. "These materials raise serious public health concerns because they encourage the unsafe use of Topamax, including, particularly, in pediatric patients," said FDA.

In 2006, the FDA warned that Topamax can cause a serious eye condition "characterized by acute myopia and secondary angle closure glaucoma." The eye side effects can lead to "permanent loss of vision," if medical care is not sought, says the prescribing information.

In 2008, the FDA warned that patients on all antiepileptic drugs should be "monitored for the emergence or worsening of depression, suicidal thoughts or behavior, or any unusual changes in mood or behavior," and warnings on drug labels were soon required.

And last year the FDA refused to approve a diet drug candidate, Qnexa, which includes Topamax along with phentermine, the "good" drug in the Fen Phen combo, because of surfacing Topamax doubts.

Qnexa probably would have worked as a diet drug. People who have used Topamax on the drug rating site askapatient say it does decrease appetite. But the action stems from Topamax making food and drinks taste terrible write more than 33 people. Others say in addition to making you lose weight, Topamax makes you lose your memory, word recall and even hair. Line forms to the left.

Of course widely promoted drugs which turn out to be dangerous after millions use them is nothing new. Many are calling for an end to the pharma Wild West in which even after fines for illegal drug marketing and personal injury settlements, pharma still profits and no principals go to jail. Especially the side effects of Topamax that have recently come to public attention.

Roughly Half Of Americans Think Trump Should Face Charges For Jan. 6, Poll Says