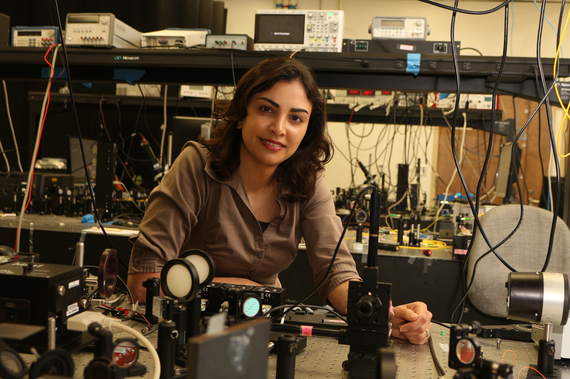 With the goal of harnessing the untapped potential of Iranian-Americans, and to build the capacity of the Iranian diaspora in effecting positive change in the U.S. and around the world, the West Asia Council has launched a series of interviews that explore the personal and professional backgrounds of prominent Iranian-Americans who have made seminal contributions to their fields of endeavour. We examine lives and journeys that have led to significant achievements in the worlds of science, technology, finance, medicine, law, the arts and numerous other endeavors. Our latest interviewee is Mona Jarrahi.

Who is Mona Jarrahi? Can you give us some brief biographical information?

Your lab conducts research in the area of Terahertz Technology. Can you share some highlights of this technology?

Terahertz is a part of the electromagnetic spectrum that is between light-wave and radio-wave frequencies. Many molecules have unique spectral signatures at terahertz frequencies, enabling chemical detection from remote distances. Moreover, a lot of optically opaque materials are more transparent to terahertz waves. This allows seeing inside objects and media that are visually inaccessible to us. Additionally, terahertz photons have much lower levels of energy compared to X-rays and light-waves, providing a non-ionizing and non-destructive platform for biomedical imaging and sensing. As a result, terahertz waves offer unique functionalities for industrial quality control, medical diagnosis, atmospheric studies, space explorations, and security screening.

In your view, what is the biggest challenge with which your field is currently grappling?

The main challenge in our field that has slowed down extensive usage of terahertz waves in our daily life is a lack of high-power terahertz radiation sources and high-sensitivity terahertz detectors that are at the same time low-cost, compact, and lightweight. This is because the traditional techniques used for generation and detection of light-waves and radio-waves don't operate efficiently at terahertz frequencies due to the limited operation frequency of solid state circuit and lasers. My lab investigates new materials and device concepts to address performance limitations of existing terahertz devices.

You have received the Presidential Early Career Award for Scientists and Engineers (PECASE). What are your most significant accomplishments that led to this recognition?

I am honored to have received the Presidential Early Career Award for Scientists and Engineers from President Obama. I was given the award for my proposed techniques for boosting the radiation power of terahertz radiation sources and detection sensitivity of terahertz detectors. My research group has created new types of metallic nanostructures that can generate and detect terahertz radiation when illuminated by laser light with orders of magnitude higher efficiencies compared to the state-of-the art. By using these new types of terahertz sources and detectors we can improve the sensitivity of terahertz imaging and sensing systems by more than 1000 times. We have also integrated our terahertz radiation sources and detectors with a variety of solid-state lasers and developed compact and cost-effective solutions for future terahertz imaging and sensing systems. In another line of work, we have been investigating new types of artificially engineered materials to manipulate various spectral and spatial properties of terahertz waves. These so called "metamaterials" consist of very tiny objects with micrometer-scale dimensions. By specific design of both geometry and the arrangements of these tiny objects, we have been able to realize unprecedented functionalities for switching, filtering, and steering terahertz waves, which are crucial in various terahertz imaging and sensing applications.

What research avenues are you exploring for the next few years?

My group continues to investigate new materials and device architectures to enhance performance of terahertz devices and systems. In the meantime, we are working on utilizing the great functionalities of the devices developed in our lab for a variety of imaging and sensing applications. One avenue we are exploring is the use of advanced terahertz imaging systems for early stage detection of cancerous tumors. Due to their very low energy as compared to shorter wavelength waves that are often used in medical imaging systems, terahertz waves are specifically attractive for medical imaging applications since they do not pose an ionization hazard for human tissue. Moreover, terahertz waves experience less scattering from biological tissue compared to optical waves due to their longer wavelengths, making it possible to see deeper into different biological tissue types. Additionally, several absorption lines of water and cancer biomarkers lie in the terahertz frequency spectrum, making terahertz waves very powerful means for distinguishing between cancerous and healthy tissues. Another subject that my lab is investigating is the development of advanced terahertz spectroscopy systems for label-free biological studies at nano-scale. Terahertz waves offer unprecedented functionalities for label-free characterization of bio-molecules and for studying the structure, dynamics, and operation of biological systems. This is because terahertz photon energies are comparable with the low binding energies of molecules inside heavy bio-molecules, and that offers a platform for differentiating proteins which provides information about their conformation states through terahertz spectroscopy. Additionally, since distinct terahertz signatures of bio-molecules are dependent on their inter-molecular and intra-molecular vibrations and rotations, terahertz spectroscopy enables the investigation of living cells and their interaction inside various biological systems. These systems include cell metabolism and reproduction as well as chemical transfer from the environment to cell through cell membrane and possible conformational changes. Moreover, since terahertz spectroscopy can capture femtosecond-scale dynamic variations, it is very well suited for investigating kinetics of molecular motions during protein rearrangement, folding, and binding to other bio-molecules.

What do you most appreciate about academia? What has been the best part of your career so far?

What I appreciate the most about academia is the freedom it gives to work on topics that I am passionate about. I especially appreciate the flexibility it offers to recruit talented researchers and providing the required resources for making new discoveries. Working with enthusiastic and bright young students on a daily basis is another rewarding aspect of this job that makes academic life very enjoyable for me.

What successes and challenges have you experienced in raising funds for your research in your lab? What are your main sources of funding?

Fortunately, the exciting potentials of terahertz technology make it easy to raise research funds from many diverse resources. The funding for my research has been mainly from U.S. federal agencies including the National Science Foundation (NSF), National Institutes of Health (NIH), National Aeronautics and Space Administration (NASA), Department of Energy (DoE), and Department of Defense (DoD). I was also fortunate to receive generous research support from the Gordon and Betty Moore Foundation, Alexander von Humboldt Foundation, and Grainger Foundation. The main challenges I have faced are the uncertainties the federal agencies face every year regarding their available budget and the short-term duration of most research grants compared to that of doctoral research, which makes long-term planning challenging and stressful.

You have received funding for use of terahertz waves to study the behavior of biological molecules and answers physical questions that were not previously possible. Could you tell us more about it?

Microscopy techniques such as Scanning Tunneling Microscopy, Atomic Force Microscopy, Scanning Optical Microscopy, and Electron Microscopy can yield highly detailed structural information of biological samples. However, their spectral and operational constraints have limited their use for studying dynamics of biological processes. Alternative single-molecule approaches use various labeling techniques (e.g. fluorescent labeling) for characterizing structural dynamics of biomolecules. Labeling biomolecules near their active sites can be a major challenge and can affect the natural behavior of molecules in many biological processes. To address these limitations, my group has presented a Scanning terahertz Nanoscopy system as a powerful tool for label-free biological studies to enhance conduct of research in biophysics. This label-free probing system would allow studying the complex behavior of biomolecules under native conditions, while avoiding exhaustive genetic and biochemical characterization of labeling reactions. One could use this information to design more efficient anti-cancer drugs or manipulate basic cellular functionalities such as cell reproduction and metabolism to slow down aging process.

The majority of graduate students in engineering studying in U.S. universities are foreign students. Has this been your experience with your students as well? How can more American-born students be encouraged to enter STEM (Science Technology Engineering Mathematics) fields?

I have also observed this trend and most of the students in my research group are international students. In order to attract more American-born students to STEM fields, one should reform the U.S. primary school and middle school curricula and increase the emphasis on math and science-oriented courses. To prevent students from being discouraged by the complexity of the subject matters, schools should plan visits to different universities, research centers, and companies to give the students a realistic view of the excitement and impact of a career in STEM.

Since you graduated from Iran's leading technical university (Sharif University of Technology), how do you compare different the US education system to the Iranian one?

I personally benefitted from both educational experiences. However, I find the Iranian education system to be more 'knowledge-driven', whereas the US education system is more 'curiosity-driven'. While Sharif University is very strong in mathematics, physics, and theoretical areas, I found that less emphasis was placed on experimental and research aspects. Another big difference I find is that the Iranian educational system trains more focused scientists and engineers on a particular track, whereas in the US, scientists and engineers are trained with more diverse backgrounds, which promotes more interdisciplinary research.