A few evenings ago, the sultry, sci-fi chanteuse Janelle Monáe teamed up with Target and Sonos to host a private concert on a picturesque pier in New York City to celebrate the release of her third studio album, The Electric Lady. LaLa Vasquez, Toccara Jones and Miguel, among others, mingled in the VIP, ice and vodka splashed around in cups, and a chilly breeze rocked the fancy little ship that the songstress emerged from to drop some solid live music on a crowd of industry fans.

I came to hear the music, above all. But in an act of submission to the all-powerful Fashion Week, I honed in on her style. Monáe is known to rock black and white, exclusively. Most of the time, a simple and immaculately cut tux hugs her petite frame; other times a black skinny tie adorns her neck. On this evening, she hits the stage in white jeans with black suspenders hanging to the sides during sound check. Her trusty bouffant is in place and her lips are the color of a maraschino cherry.

It's fun to get wrapped up in the politics of fashion -- why Gaga wore the meat dress or why Miley...okay never mind. Sometimes Monáe's style is socially conscious: she tells us that she wears black as white as a uniform to honor those who work service jobs in the community. "I want to write music for people just like me when I was growing up and going through school. I want to make that music that makes them feel empowered throughout the week. Motivated, inspired, alive -- even on Monday," she says.

But Monáe's statements (both fashion and musical) are multi-layered. And her alter ego is no sidekick. The chick she calls Cindi Mayweather - a saucy android who travels time and fights oppressors -- co-stars throughout her projects. She first appeared in a dream. 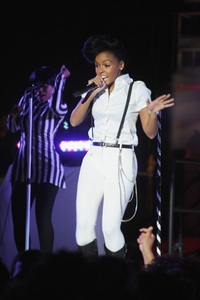 "I have a vivid imagination," says Monáe. "Growing up, my grandmother watched Star Wars, Star Trek and the Twilight Zone and I've always had a love for science fiction. I watched Fritz Lang's German expressionist film Metropolis and I was so in that world that I actually dreamt about Cindi Mayweather. She is in the future but I feel as though we share the same DNA."

Monáe is guarded, an admittedly private person. I see a young Octavia Butler when she speaks to me, a bit solemn, gifted and scary smart. The type that knows an uncomfortable amount of information. "[Cindi] helps me write and she helps me talk. When I speak about science-fiction and the future and androids, I'm speaking about the 'other.' The future form of the 'other.' Androids are the new black, the new gay or the new women."

So we have the singer/writer and the android activist fighting for those in the margin, each one containing her own set of ideals that intersect from time to time. Sounds familiar. We've got Beyoncé and Sasha Fierce, Nicki Minaj and her quasi British fairy godmother. And let's not forget Roman. The list of grown-up imaginary friends in the hip hop and R&B world goes on. And it seems to be a particularly female phenomenon.

Yes, the men sometimes have alter egos too. But they are definitely not the dream-conceived, complex characters with motives and socioeconomic concerns like Cindi. Let's be real: Eminem and Slim Shady are the same person. The men in the game seem to create their alter egos as lyrical contenders or just a neurotic voice that eggs them on (shout out to Tyrese and Black Ty). Most importantly, male alter egos are not allies.

"Cindi is my hero," Monáe says. "She keeps me in the present. She has encouraged me in times where I don't want to talk about certain topics that could be freeing and inspiring to other people."

This inspires me and worries me. First, on that feminist tip, it's incredibly empowering. Being armed with a complementary version of oneself seems wise and self-sufficient. It returns to the age-old theory of seeking and attaining wholeness rather than looking for someone or something else to complete you.

But female artists and performers are more inclined to allow an alter ego to embrace them. Is it that the community is not supporting them in the right way or do we just expect more from our women, more for our female dollar? Perhaps the industry demands two products for every one badass diva on iTunes. This bodes true especially for our women of color. Two faces, two personalities and a whole lot of Du Bois's double consciousness for the price of an album.

Back to the feminism. Monáe /Mayweather mirrors the alliances the artist has formed with other women who float on a similar creative stratosphere. On the double-disc The Electric Lady, she has collaborated with Erykah Badu and Esperanza Spalding. I asked her about Spalding in particular and Monáe spoke of their energies mingling: "She's so much more than jazz. She's an electric lady. She is someone that is looking out for the community through art and music." Spalding once only appealed to an esoteric group of contemporary jazz enthusiasts. And now, I have to constantly tell people that I was "on that first", a fan years before she performed at the White House. Ah, the ego monster.

Speaking of ego, Monáe's peer-reverence is a breath of fresh air, especially after all the hype of Kendrick Lamar's infamous verse on Big Sean's song "Control," full of playful but potent rapper-bashing braggadocio. Unfortunately, our male rappers and singers can't speak as freely about their admiration for male role models without a mind-numbing "no homo" afterword. But mentorship and community is crucial in the music industry. The females are doing something different here. Even Nicki Minaj, with her gritty-mouthed schizophrenia. Maybe being one's own godmother isn't the craziest thing in the world.

After our interview, Monáe performs on a flawless set. She brings Big Boi on to do "Tightrope" with her. She gives the crowd just enough to keep them longing. It's enjoyable but just like her, I now know too much. I wonder if every female artist needs a Cindi to comfort and exhilarate her, or if one being will ever be enough.