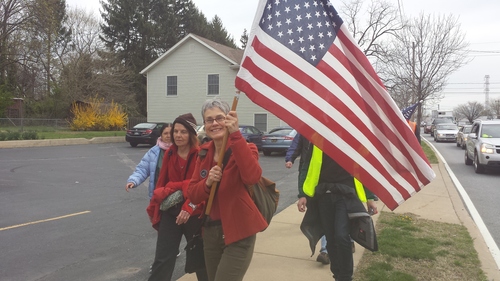 During our Democracy Spring march from Philly to D.C. to sit-in on the steps of the capitol this week, one of my favorite chants was "Money ain't speech and corporations aren't people!" The closer we got to Washington, the more I could feel marchers' outrage that corporations powerfully influence governance, yet they lack several essential characteristics expected of citizens participating in our democracy.

Since the Supreme Court's 2010 Citizens United decision, many compelling arguments have piled up to challenege the bizarre notion that corporations deserve our constitution's protection regarding political speech, protection in many ways comparable to that afforded real people. But during the extended thinking time of my 100-mile march, I became increasingly preoccupied with the most obvious objection:

Corporations should not hold the political rights of persons because they can't uphold the basic duties and responsibilities of citizenship expected of most Americans. Here are four:

Perhaps Justice Stevens captured these points best in his dissent to the Citizens United ruling:"Corporations have no consciences, no beliefs, no feelings, no thoughts, no desires. Corporations help structure and facilitate the activities of human beings, to be sure, and their 'personhood' often serves as a useful legal fiction. But they are not themselves members of 'We the People' by whom and for whom our Constitution was established."

Democracy Spring cries out against the Citizens United and other court decisions that equate political spending with speech and calls on Congress to begin the constitutional process of passing an amendment effectively reversing these decisions. Three-quarters of state legislatures must also pass the amendment. The proposed amendment would "distinguish between natural persons and corporations or other artificial entities created by law, including by prohibiting such entities from spending money to influence elections." It also includes language protecting "freedom of the press." 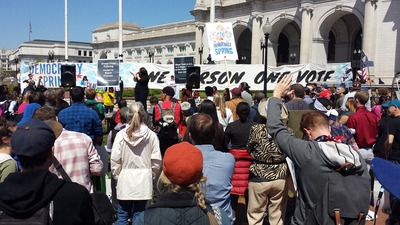 In all this, point four above--corporations' incapacity for loyalty to our nation's wellbeing--is worth special attention. Consider these examples:

Today, "corporate inversions" allow companies to avoid billions in taxes needed for our wellbeing by relocating their legal headquarters to lower-tax nations. "They effectively renounce their citizenship," observed President Obama.

In 2012, the Wall Street Journal noted that "at least 60 percent" of U.S. corporate cash stockpiles were held abroad.

As The Economist recently noted, U.S. corporations are now collectively stockpiling roughly $800 billion each year, doing nothing with it to benefit our society. At the same time, workers' share of the GDP nears an historical low.

Moreover, let's not forget that even as American lives are being sacrificed in war, U.S. corporations have been known to show no loyalty to our country. An example is U.S. corporate business with the Nazi regime in World War II. 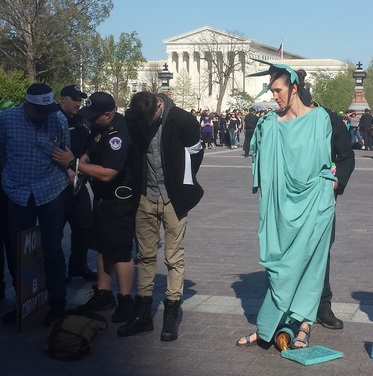 Our founders envisioned a republic of citizens attentive to, and participating in, self-government. Yet, corporate political influence, greatly abetted by Citizens United, crowds out the voices of even our most attentive citizens. Jefferson warned us of the danger. "If once they [citizens] become inattentive to the public affairs," he once said, "you and I, and Congress, and Assemblies, judges and governors shall all become wolves."

On my march from the Liberty Bell to our nation's capital, I became ever clearer that our republic depends on the engagement of real citizens as equals shaping public matters; and that can't happen as long as we citizens allow the conflation of spending and speech and corporations to be afforded the political rights of persons.

Catching a cab in D.C. after our third day of civic action, my driver Samson, who emigrated from Eritrea 20 years ago, responded to my chatter about Democracy Spring: "Yes, there's way too much money in politics, and the world needs America to be an example of democracy that works." Obviously, he didn't need much convincing. I'll see him this Saturday at the rally!