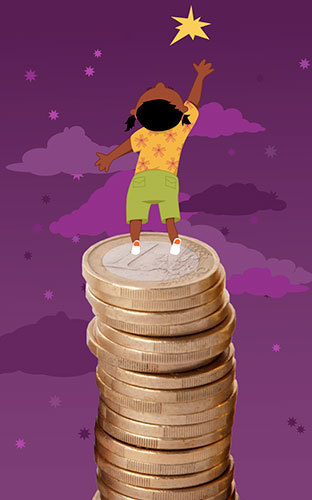 Many years ago, I spent a few days testifying in a funding equity case in Alabama. At the end of my testimony, the main lawyer for the plaintiffs drove me to the airport. "I think we're going to win this case," he said, "But will it help my clients?"

The lawyer's question has haunted me ever since. In Alabama, then and now, there are enormous inequities in education funding in rich and poor districts due to differences in property tax receipts in different districts. There are corresponding differences in student outcomes. The same is true in most states. To a greater or lesser degree, most states and the federal government provide some funding to reduce inequalities, but in most places it is still the case that poor districts have to tax themselves at a higher rate to produce education funding that is significantly lower than that of their wealthier neighbors.

Funding inequities are worse than wrong, they are repugnant. When I travel in other countries and try to describe our system, it usually takes me a while to get people outside the U.S. to even understand what I am saying. "So schools in poor areas get less than those in wealthy ones? Surely that cannot be true." In fact, it is true in the U.S., but in all of our peer countries, national or at least regional funding policies ensure basic equality in school funding, and in most cases I know about they then add additional funding on top of equalized funding for schools serving many children in poverty. For example, England has long had equal funding, and the Conservative government added "Pupil Premium" funding in which each disadvantaged child brings additional funds to his or her school. Pupil Premium is sort of like Title I in the U.S., if you can imagine Title I adding resources on top of equal funding, which it does in only a few U.S. states.

So let's accept the idea that funding inequity is a BAD THING. Now consider this: Would eliminating funding inequities eliminate achievement gaps in U.S. schools? This gets back to the lawyer's question. If we somehow won a national "case" that required equalizing school funding, would the "clients" benefit?

More money for disadvantaged schools would certainly be welcome, and it would certainly create the possibility of major advances. But in order to maximize the impact of significant additional funding, it all depends on what schools do with the added dollars. Of course you'd have to increase teachers' salaries and reduce class sizes to draw highly qualified teachers into disadvantaged schools. But you'd also have to spend a significant portion of new funds to help schools implement proven programs with fidelity and verve.

Again, England offers an interesting model. Twenty years ago, achievement in England was very unequal, despite equal funding. Children of immigrants from Pakistan and Bangladesh, Africans, Afro-Caribbeans, and other minorities performed well below White British children. The Labour government implemented a massive effort to change this, starting with the London Challenge and continuing with a Manchester Challenge and a Black Country Challenge in the post-industrial Midlands. Each "challenge" provided substantial professional development to school staffs, as well as organizing achievement data to show school leaders that other schools with exactly the same demographic challenges were achieving far better results.

Today, children of Pakistani and Bangladeshi immigrants are scoring at the English mean. Children of African and Afro-Caribbean immigrants are just below the English mean. Policy makers in England are now turning their attention to White working-class boys. But the persistent and substantial gaps we see as so resistant to change in the U.S. are essentially gone in England.

Today, we are getting even smarter about how to turn dollars into enhanced achievement, due to investments by the Institute of Education Sciences (IES) and Investing in Innovation (i3) program in the U.S. and the Education Endowment Foundation (EEF) in England. In both countries, however, we lack the funding to put into place what we know how to do on a large enough scale to matter, but this need not always be the case.

Funding matters. No one can make chicken soup out of chicken feathers, as we say in Baltimore. But funding in itself will not solve our achievement gap. Funding needs to be spent on specific, high-impact investments to make a big difference.