New research tells us what we already kind of knew about money and happiness, but may have chosen not to believe: More money will make you happier.

It doesn’t matter if you are very rich, very poor or somewhere in between, advances in income are always met with increases in life satisfaction, according to an April report conducted by University of Michigan professors Justin Wolfers and Betsey Stevenson. Their findings debunk previous studies claiming once basic needs are met, more wealth no longer leads to more happiness.

The researchers' analysis of 155 countries, accounting for over 95 percent of the world’s population, found no evidence that advances in income for the rich are met with diminishing increases in happiness. Wolfers explained in an interview with The Huffington Post that if happiness really did taper off at a certain income level, “anyone who is rich would be an idiot.”

“If more money was not associated with more happiness, we would stop working,” he said. “Every time we doubled income, we get the same increase in well-being.”

Earlier studies found happiness tended to plateau once a certain income level was reached. A study from Princeton University's Woodrow Wilson School last year claimed that after attaining an annual salary of $75,000, Americans no longer reported greater levels of happiness. Another study from the Skandia International’s Wealth Sentiment Monitor surveyed 13 counties to find the average global “happiness income” was around $161,000.

Wolfers said these previous studies that found evidence of an income “satiation point” were not as “careful” and drew their conclusions from mostly informal analysis. Instead, he said, his findings are based on comprehensive Gallup World Poll data from 2008 to 2012.

Here is what Wolfers and Stevenson found: 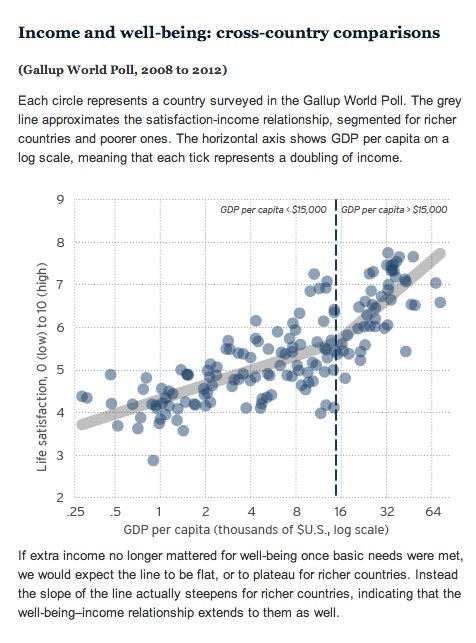 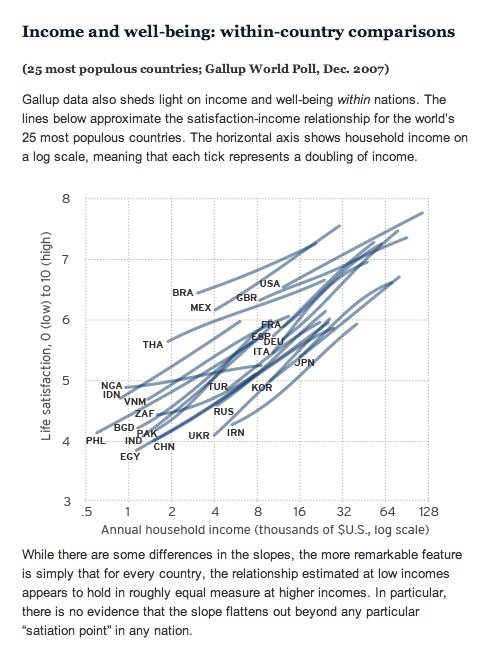