One of the observations currently being made about the 2016 presidential elections involves the ineffectiveness of money as a campaign resource. Anecdotally, there appears to be good reason for such skepticism. Raising large sums in mostly small increments, Vermont Senator Bernie Sanders has raised over $74 million, enough money to compete with the Clinton fundraising machine. Sanders has been successful enough raising money that he has opted out of the public financing system that, at least in theory, he supports. Perhaps ironically, Sanders fundraising success against Clinton might be the best argument against his own campaign platform. If the campaign finance system is broken by Wall Street influence, how has a self-described "democratic socialist" raised more money in individual contributions than any single candidate in the Republican field, and more small donor contributions than any candidate in history? 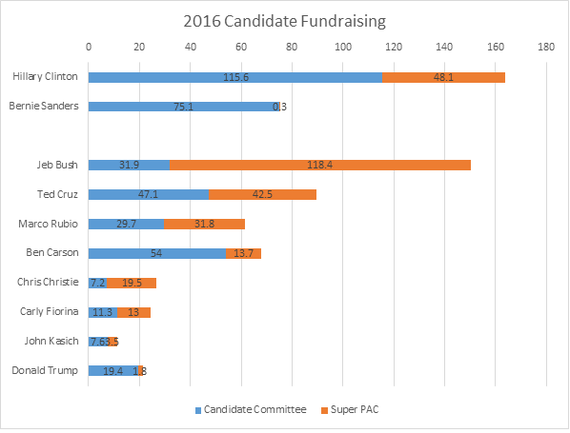 On the other side of the aisle, Jeb Bush and his affiliated Super PACs have raised over $150 million to barely register as a blip in the national polls or in the Iowa caucuses. There may be previous candidates who have won fewer votes with more resources and organizational support, but it is hard to think of them. While it is possible that Jeb will emerge Lazarus-like in New Hampshire or South Carolina or beyond, it seems increasingly unlikely. In this campaign cycle, voters don't seem inclined to buy what he is selling no matter how hard he is peddling it. The lesson for campaign finance is relatively straightforward, money can't fix a weak campaign or a struggling candidate.

For at least some observers of the campaign, such anecdotes serve as evidence that money matters far less than we imagine. The campaign so far, however, is fairly consistent with what we understand about the effects of money on the electoral process. That is, money is a necessary but not a sufficient condition for winning an election. Candidates who can't raise money necessarily lose, but raising (or spending) the most money is no guarantee of victory. How the money is spent, the effectiveness of candidate messaging, and the overall political mood set boundaries around the effectiveness of campaign spending in any given electoral context. From the standpoint of democratic theory, this is mostly (though not entirely) good news: Voters aren't malleable balls of clay who can easily be molded by candidates with unlimited resources.

At the same time, however, it is a mistake to underestimate the importance of money in the political process. Money matters in all sorts of ways, some obvious, some more subtle, but its effects are pervasive and far-reaching. Here, we can draw several conclusions from the 2016 presidential race.

1. Candidates who drop out of an election typically do so because their funding sources dry up. Funding sources dry up when donors start to believe the chances of victory are near zero. Unable to show any momentum during the 2016 presidential campaign, Scott Walker, Rand Paul, Rick Santorum, and Martin O'Malley saw their financial support dwindle and were subsequently forced out of the race. Other candidates, especially candidates with little cash on hand, will follow after New Hampshire (February 9) and South Carolina (February 20). Jeb Bush has raised enough money to hang around for a while, but if he looks increasingly unlikely his financial supporters will migrate to other candidates. 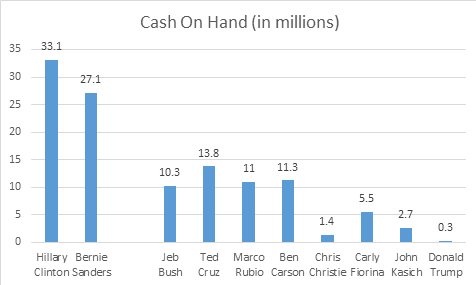 There is another less visible effect of money on candidates. Candidates who aren't perceived as viable are typically never able to raise enough money to mount a credible campaign. This is particularly important in races below the presidential level where candidates challenging incumbent office-holders find it difficult to raise enough money to mount a competitive campaign. If we think of campaign finance as market-based, it is a decidedly risk-averse, preferring likely winners and incumbents over challengers.

2. Thanks to Citizen's United and the ease of creating and funding Super PACs, more candidates cannot only run for president but can stay in the race much longer. Traditional candidate campaign committees face significant limits in the amount of money they can raise from individuals, parties, and groups. Individual contributions to campaign committees, for example, are limited to $2,700 per cycle. Because Super PACs can accept unlimited contributions, they can be funded by a handful of large donors.

One unintended consequence is that more candidates are running and running longer this election cycle because they can rely on designated Super PACs to support their campaigns. The free-for-all for the Republican nomination is at least partly the result of the availability of campaign funding for a diverse range of candidates - many outside the mainstream of the Republican Party. To date, however, we have yet to see much evidence that being able to stick around has helped struggling candidates become more competitive. Where the Super PAC is primarily the financial tool of a single benefactor (or a limited number of benefactors), the money dries up slowly, allowing candidates to continue to spend money on flailing campaigns. The reality is that much Super PAC spending is wasted on candidates who can't (or won't) win.

3. The exponential growth of campaign spending over the past several election cycles has led some observers to worry that billionaires would buy the 2016 elections. This turned out to be wrong not because the billionaires weren't trying but because they preferred different candidates. The idea that billionaires, united in their preferences, could control election outcomes by controlling the flow of money to candidates only works if they mostly agree on who the best candidates are and the direction of the country. At least in 2016, there is little or no agreement among the donor class about the "best" candidates.

4. Super PACs are often confused with "dark money" groups that hide the identity of major donors. There is good reason for the confusion. While Super PACs must disclose their donors, donations can be filtered through 501(c)(4) which hide the identity of contributors In most cases, however, Super PACs can easily to be tied to a single large contributor or a limited number of contributors. These donors contribute directly to the Super PAC and their contributions are disclosed because they want their influence to be recognized. If you want to be a king-maker or want to reap later policy benefits, you typically don't hide the shadows.

5. Small dollar contributions are not necessarily more democratic or better for the political system. Perhaps the biggest surprise this electoral cycle has been the fundraising success of democratic socialist Bernie Sanders who raked in a record number of small contributions (>$200). While the overall amounts are staggering, Sanders' success in raising small contributions reflects one of the truisms about campaign fundraising. Ideological and issue-based candidates tend to attract small individual contributions. The modern conservative movement, for example, was built on small contributions solicited through innovative uses of direct mail fundraising during the 1970s and 1980s.

While the research on this point is not entirely conclusive, there is significant evidence that money from small contributions contributes to political polarization. As Florida Democratic Representative Chris Murphy (as quoted by Ezra Klein) observed: "We have to admit that everybody who is giving is giving for a reason. Some of them are your friends and family and they care about you. But most of the time they care about an issue, whether they're a corporation or an individual. We draw these arbitrary lines, but corporations want things from the government, and so do individuals." If large contributions are corrupting, Klein concludes, small contributions are polarizing because small donors value partisanship.

6. Within this context, only a small percentage of Americans contribute any money in any campaign cycle. According to the American National Election Studies (ANES), only 12 percent of Americans contributed to a campaign during 2012. Campaign contributors are notably older, wealthier, and better educated than the general population. An even small percent (0.23 percent according to Open Secrets) contribute $200 or more. Campaign contributors - small or large - are not the huddled masses. They aren't even the median voter. While online fundraising makes raising small contributions easier, it by no means changes this basic reality. Contributors do not resemble the great majority of Americans who do not contribute to political campaigns.

7. Candidates don't have Super PACs. By definition, Super PACs may align with candidates but are officially run independently from the campaign. This means the PACs associated with various candidates are not supposed to coordinate expenditures though enforcement is minimal and the lines are thin and blurred. When Bernie Sanders says he doesn't have a Super PAC what he really means is that no one has organized a Super PAC specifically with the goal of electing him president. There are Super PACs, however, spending on his behalf. National Nurses United has spent over $500,000 on his behalf, and Communication Workers of America has agreed to "use all legal and possible resources to get him elected."

One might argue union-based Super PACs are less concerning from a perspective of democratic theory but they are Super PACs nonetheless. More generally, political scientists have long argued that money in politics is like water flowing downhill, it will find a way into the political system. A candidate like Sanders might reject Super PACs but that doesn't mean he can control the flow of money supporting (or opposing) him during this campaign.

If you want to get rid of Super PACs, the simplest mechanism for doing so may be by removing the contribution limits to campaign committees. That won't change the influence of money over the political process but it would assure that the money is directed through, rather than around, candidate campaign committees.

Overall, campaign finance continues to play a critical, if not defining, role in the 2016 presidential campaign. It affects not only who decides to run, it also affects their ability to compete in early primaries and their ability to stay in the race. As in the corporate world, unlimited campaign spending can't make voters buy into candidates or ideas they don't want, but no candidate can compete without continuing and sustained financial support. Candidates like Bernie Sanders or Donald Trump may challenge the system by raising money in smaller increments or by self-financing much of their campaigns, but they aren't altering the basic equation of American politics whereby money is a critical ingredient to electoral success. Money might not buy elections but without it, you aren't even in the running.