PARIS -- At the end of the day, money talks.

Whatever the final agreement, the COP21 negotiations in Paris provide a new way of framing how and why to address climate change.

Instead of nurturing the ruptured US political divide--a curious, hideously fascinating spitting match for all the world to see, which obfuscates the real and giant issues like clouds of squid ink--this new frame offers two subjects people care about no matter what: their health, because without it they're dead; and money.

A chorus of influential proponents have seized on these sticking points. In meeting after meeting, panel after panel, statement after statement, pledge after pledge, CEOs, investors, and heads of state have created a welcome, rich, and delicious new conversation.

A business case for climate change.

What is the price, for example, of this week's first-ever red alert in China, as millions are told to stay indoors, away from work and school, so as not to be made ill by air so sooty it looks dark grey? What does it cost to hospitalize and treat asthma-prone children during a heat wave? How much should cities budget for extreme weather events and the infrastructure flaws they reveal, like inadequate housing, aging roads, bridges, water pipes, and electrical underpinnings? What's the value of once-valuable shoreline real estate that's now under water? What will it cost to relocate whole populations?

The new conversation insists that we stop spending money on things that don't work, or are damaging, because they cost too much. Instead, we must focus on a massive transition to a new low-carbon economy.

It's all three: a global transformation of perspective.

Others among us simply don't want to--or can't--think about this. They are busy. They have enough trouble just getting through the day. The problems of climate change seem remote and irrelevant--especially when there isn't enough money for food or medical care for their families.

Who can blame them?

But the transformation is already underway, propelled by the plummeting price of both oil and renewable energy.

Millions of people are clamoring for it, and trillions of dollars are beginning to invest in it.

Why? Because instead of being an abstract ideal that reduced profit-making machineries and opportunities, solving climate change is now directly connected to two very personal and highly motivating goals: staying healthy and making money. Because yes: climate change is now very obviously costing us both our money and our health.

The good news is that this new conversation ignores deniers, skeptics, and small-minded fans of the status quo. The new conversation is rushing after the market opportunities that the challenge of global warming provides. (For a great explanation of this, listen to Bill Gates, founder of Microsoft, who until recently was himself a vocal skeptic of climate science.)

Call it what you will: global warming, the greenhouse effect, climate change, a hoax, 2 degrees, 3 degrees, a bunch of crap, or no big deal. Whatever you want to call it, it is what 97% of scientists agree on, and which is careening the planet to catastrophic extremes, and which the leaders of our time huddled in Paris to solve at the COP21.

And everyone will eventually be on board with this new way of life--either as savvy first movers; deniers who are dragged kicking and screaming; or, as one of the 9 billion people in the world whose health and financial security will improve. 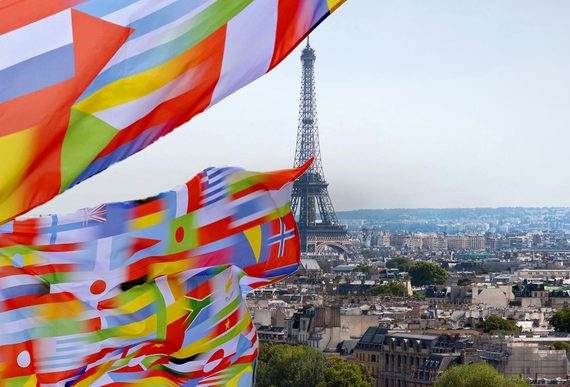