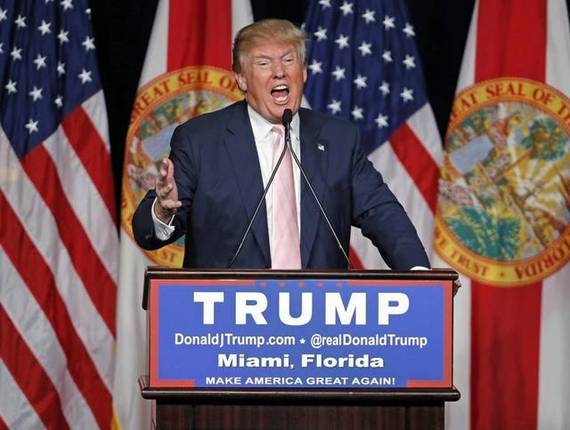 In 1960 the Eisenhower Administration imposed the first partial embargo (limited to exports) to communist Cuba, and Cuban-Americans and the GOP have been making beautiful music together ever since. Now, thanks to Donald Trump's political infidelities, the Miami-GOP marriage may be headed for the rocks.

The recent discovery of Donald Trump's apparent violation of the U.S. trade embargo is about much more than one candidate's prospects for election. It represents the clearest and newest evidence of a slow but undeniable shift in the relationship between Cuban-Americans and the Republican Party.

Since 1962, when Pres. Kennedy did Eisenhower one better by enacting a full embargo on Cuba, every single Republican nominee for the White House has enthusiastically supported its continuation. And every Republican Presidential aspirant since then has made a point of promising the Cuban diaspora that he would maintain the US's hardline stance against the Castro dictatorship.

For over 50 years, it's been a beautiful relationship: Republicans pledged their undying devotion to the Cuban-American cause, and the exile community delivered the diasporic version of the siempre fiel isla [ever-faithful island] of Cuba's colonial days. Of course, beyond the quadrennial dance of hearts and chocolates and flowers they enjoyed a relationship of mutual convenience. Republicans could count on a reliable -- and sizeable -- voting bloc in an increasingly important state for national elections. And Cuban-American leadership reaped the benefits of exile-friendly policies, not to mention a level of political clout in Washington arguably disproportionate to their actual population.

The Miami-GOP bond remained strong through the 1980s, with the Reagan-Bush years arguably its apogee of mutual passion. By the mid-1990s, however, its dissolution had begun. Although Bill Clinton never carried Miami-Dade's Cuban vote, his 42% showing in 1996 kept Bob Dole's share under 50%, and was instrumental in Clinton's winning Florida. No Republican presidential candidate has carried Miami-Dade since then.

Cuban-Americans of a certain generation have remained loyal to the GOP, but their relevance has declined as their numbers dwindle. Most of those still living from the original 1959-1960 exiles are about as old as Fidel Castro (90) and his "younger" brother Raúl (85). The anti-Castro fervor that united the community has faded over subsequent generations, with fewer and fewer younger Cuban-Americans willing to pick up the baton. And the influx of so many other Hispanic immigrant groups -- and even Cubans more recently arrived -- with their own political agendas (or none at all) dilute the hardliners' political leverage even further.

It's not as if Miami Cubans didn't already know that Trump is not to be trusted. In September 2015 Trump told The Daily Caller that opening U.S.-Cuba relations was "fine," while complaining that Pres. Obama "should have made a better deal." That was before the Florida primaries, which Trump perhaps figured he would lose to Marco Rubio or Jeb Bush anyway. Now, with Florida's 29 electoral votes poised to boost either he or Hillary Clinton to a November victory, the prodigal suitor has returned to woo the Cuban-American votes he now desperately needs. On September 16 -- almost exactly a year after his pro-Cuba remarks, Trump returned to the longstanding Republican script, promising to reverse Obama's executive orders on U.S.-Cuba relations unless the island nation agrees to "religious and political freedom for the Cuban people" and "the freeing of political prisoners."

And despite the flip-flop, and its obvious insincerity -- he even asked his audience "Is that right?," the political equivalent of the nervous husband wondering whether he's said exactly what the Mrs. wanted to hear -- it might have worked, too. Except Newsweek's bombshell exposing Trump's 2004 secret business dealings with Cuba exploded into the headlines two weeks later. What it blew up, at least for this election cycle, was the remaining semblance of the once-cozy relationship between Cuban-Americans and the GOP.

Many couples endure not out of love, but because of habit or inertia, or codependence and fear. They muddle along, unhappy together but afraid of the alternative. Sometimes one partner is willing to tolerate neglect, any number of slights and indiscretions, to avoid facing the sad truth. Until one day, they suffer a betrayal so brazen, so humiliating -- and so public -- that the only way to preserve their self-respect is to leave. Cuban-American Republicans in Washington -- most notably Rubio and Rep. Mario Díaz-Balart, who is giving Trump "the benefit of the doubt" -- may continue to support their nominee despite his now-public betrayal. For many of their constituents, however, all bets are off.

Perhaps in 2020 the GOP's Presidential nominee will begin to heal the damage that Trump has undeniably done to the party's Cuban-American coalition. Many marriages recover from infidelities. Trust can always be regained, though it will never again be what it was. But for now, that bridge is well and truly burned. And the timing of Newsweek's exposé leaves Trump no time to repair the bridge that he so desperately needed to cross en route to a Florida -- and perhaps national -- victory.

The long love affair between Cuban-Americans and the GOP has been on the wane for at least a decade now, and was probably headed toward a slow, sad end anyway. But as U.S. politicians have learned the hard way -- with Pres. Clinton's Elian debacle as Exhibit A -- one double-crosses Cuban-American voters at their own peril.

Now, thanks to Trump, this divorce is going to get ugly.