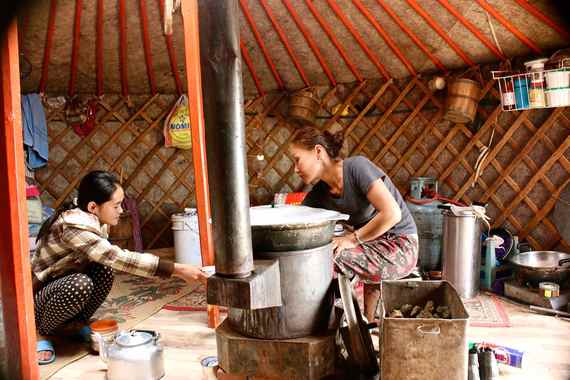 "My name is Nomin, and I am forty-two years old ..." Nomin is the thirty-fifth woman our team has interviewed on a five-week journey across the Gobi Desert to research women's and girls' uses of digital technologies. When we enter her ger she sits stirring a cauldron of milk tea. She tells us that she is the mother of three, and that she splits her time between a summer camp outside of Dalanzadgad, the aimag center of Omnogovi Province, and an apartment in Ulaanbaatar, where her children attend school during the winter. As she speaks, her two daughters sit against the wall of the ger, playing games on their Smartphones; occasionally they stop to listen. Nomin is proud of her nomadic heritage. Even though she is college-educated and has access to urban comforts in the winter, she is happiest when she is working in the countryside, tending to her family's livestock. During the summer her life is rich and productive.

In Mongolia, women are the primary providers and caretakers, especially among rural herder populations. They are also statistically more educated and better off financially than their male counterparts, although gender equality poses an issue in a mostly-patriarchal culture. The women we meet are hospitable and generous: we learn the landscape of the Gobi in stories told over warm bowls of milk tea. Those stories inspire us to listen more closely, to follow an underlying thread of resilience. They remind us that we are on this journey because we fundamentally believe in the powerful combination of women and knowledge; and we know that Mongolia is a land of exceptionally strong women.

This strength is something I have come to admire in our translator, Gundegmaa. Several months earlier, when, Lara, the team's Canadian researcher, and I pieced together our research project we interviewed several potential female translators. In the end, we found Gundegmaa, or Gundii, through a lead in Canada. After an in-depth Skype interview, we knew that we would be hard-pressed to find another candidate with comparable English skills, and we offered her the job almost immediately.

Now, I know how lucky we are to have Gundii's combined compass of intellect and wisdom guiding us. Whenever we stop for an interview she talks to the women we meet, laughing and paving the way for our conversations. She navigates the language barrier, molding our questions appropriately and catering them to each interviewee. Gundii is more than a guide; she is a teacher. I wonder if this is because she understands first-hand what many of the women and girls we meet are facing, She, too, grew up in a small village three hundred kilometers outside of Ulaanbaatar where she dreamed of a brighter future. Under the guidance and encouragement of her father she worked hard and excelled in school, especially in English class. Eager to hone her English skills she moved to UB when she was sixteen to live in a small two-room apartment with her two older sisters. She studied late into the night, memorizing English vocab and practicing her grammar. At eighteen her hard work paid off, and she won a year-long Soros Scholarship to study English at the University of Montana. Gundii threw herself into seminars on political science and gender studies. After twelve months she returned to Mongolia determined to take her education further-- to do something to empower and elevate women in her own country. She worked as the project leader on a youth project involving fifteen aimags and 15,000 adolescents. Together with the help of two prominent NGOs, Globe International and Mercy Corps, Gundii promoted digital activism across rural Mongolia by creating a 90-page guide to social media tools like Facebook, Twitter, and YouTube. Now, her intention to promote positive change carries her across the desert; and when Nomin points to her eldest daughter and tells us that she hopes to one day work in nanotechnology Gundii's eyes light up. They talk and later trade email addresses: one woman's determination to succeed ignites and fuels another's.

The more we travel the more I see how women bind Mongolian society and families together. I see how women like Gundegmaa inspire other women to reach their full potential. And I see how that deep commitment to positive action is not only something valuable for Mongolians, but for women across the world. Mongolia's digital landscape is developing at an accelerated pace. In response to a recent boom in mobile technologies and especially Smartphones, information access is changing the nature of nomadic society and arguably, traditional values and priorities. Social media has taken Mongolia by storm. Although Internet has yet to reach most areas of the Gobi Desert it is likely that the next few years will change that. Already, mobile feature phones have become the primary means of communication for nomadic pastoralists. Nomads no longer visit each other to share tea and chat about livestock; they call each other. With increased access to information there is a heightened need for information management. As technological tools reach Mongolians from diverse sectors and communities, it is clear that there will need to be some way of educating and training youth about the power and implications of the digital world. I cannot help thinking that women like Gundegmaa should lead that movement.

After an hour inside Nomin's ger it is time to move on. I stoop down and step over the threshold, into the sun. Before opening the car of the jeep I turn back for one last look inside the ger. Once again, Nomin's daughters sit near the wall, tapping away and playing games on their Smartphones. Gundegmaa meets my gaze, "I hope that they will study abroad and achieve their dreams," she says, "I hope that inspiration can be used to guide Mongolia's future." I look at her and nod. As Nomin stirs her cauldron of tea the steam rises.