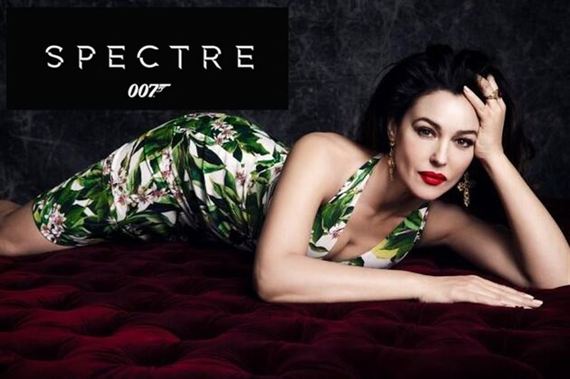 For those of you who have been living inside a broken pay phone booth since 1962, you may not have been aware that James Bond likes his women plentiful, available, and pretty darn nubile. The average age of the men who have played Bond over the last 200 years, has been 43.5. The average age of the women playing Bond Girls? Let's just say they were recently toilet trained. Actually, this isn't exactly true. With the exception of the Bond Girl in "From Russia With Love," who was still in her teens when the film was made, most have averaged 28.8. But that's still a 14.7 year difference between the suave leading man and his bouncing targets.

According to the Washington Post, all that is about to change. Enter Spectre, #24 in the Bond series, this one starring Daniel Craig as Bond. Craig is 46. His Spectre Bond Girl, Monica Bellucci, is 50. Twice, in Bond History, Bond Girls have been older then Bond. But in each case, both Bond and his Girl were in their 30s. Bond has now made the great leap forward, all without the aid of the latest in killing technology.

It goes without saying that Bellucci is drop-dead gorgeous and sexy. But she doesn't look 20 or 30 or even 40. She simply looks like a gorgeous older woman. We've had women 50-plus as on-screen sex symbols before. But they are usually paired with men even older, or are presented as "the older woman" in films. With all due respect to Mrs Robinson, older women are of more value between the sheets than as a seasoned instructor on the glories of sex to some kid still picking at pimples on his face.

To be fair to Bond, he's only doing what millions of red-blooded males do all the time: lust after younger women. According to Christian Rudder of the dating site OK Cupid, the site created two graphs showing the ages of people most attractive to men and women as they grew older. As a woman ages, she finds attractive the photos of men in her age range, or perhaps a few years younger. But it's much different for men, who prefer women in their early 20s even if the man is 30, 40 or 50.

Life in the Boomer Lane has addressed herself to this in several previous posts. She has also written about her own observation that, while many older men may believe they prefer younger women, the reality is that most couples are age compatible. But Hollywood bears even less resemblance to reality than Congress does, and so on the screen, Bond, like most other leading men, fulfill the older man/younger woman fantasy. The media encourages the myth.

LBL hasn't seen a Bond film since 1964, but she is standing and cheering over this one. Now, if only the film drops the "Bond Girl" designation, it will be a total win. After all, a 50-year-old woman isn't a girl. No way, no how, no sir. And thank goodness for that.