A few weeks ago, 23/6 made a parody of the "You Can't Have Alex" MoveOn.org ad. We called it "John McCain, Meet William," with me as the mom and my son as "William." Huffington Post linked to it. We got a lot of hits. Nice.

On Saturday, June 21, I was listening to The Monica Crowley Show on 770 AM. Monica is one of the crazier of the right-wing radio personalities and I am fascinated by her rabid devotion to George Bush. She began tearing apart the MoveOn ad and she played our parody ad as she went to commercial, without crediting us. 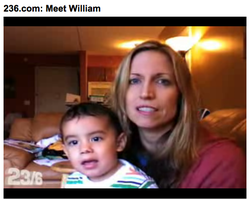 When Monica came back from commercial, she played our parody again but this time she claimed she created it. "We put together a little spoof there of that MoveOn.org where the woman holds up her baby..."

I dropped my baby and picked up the TiVo remote. Then I realized TiVo doesn't replay radio. I dropped the remote and picked up my baby. I tried to calm down. Breathe. You probably mis-heard. Let Monica know, so she can correct her mistake. Republicans always do the right thing. I found Monica's website and sent her a email, asking her to give 23/6 (or me!) credit.

I didn't hear back. 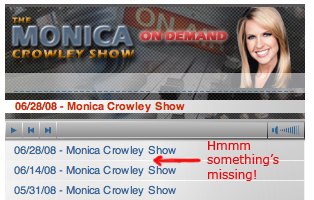 I began checking Monica's website every day. Podcasts of her Saturday shows are always available for America's downloading pleasure, usually within 3 or 4 days. But June 24, 25 and 26 came and went with no June 21 podcast. She taped another show on June 28th - that podcast was posted on July 1. But still... June 21st's show is nowhere to be found online.

Monica, are you deliberately hiding your podcast from me?

Because I found it.

Monica, Monica, Monica. You stole content from a single mother and then you hid the evidence. This isn't the first time you've been caught stealing either. Did you not learn anything from working with Richard Nixon? It's not the crime, it's the cover up.

Update: Since this post went up at 6:03 pm, Monica Crowley's site has been updated to include the June 21 podcast. Better late than never.