Authorities have launched an investigation after a Hawaiian monk seal pup was found dead and four others injured, including the deceased pup's mother, from an apparent dog attack on the Hawaiian island of Kauai.

The group of injured seals were found early Tuesday morning on a fenced portion of a remote beach on the island's north shore, Rachel Sprague, the Hawaiian monk seal recovery coordinator for the National Oceanic and Atmospheric Administration (NOAA), told The Huffington Post. The smallest of the group, a 50-pound pup known as "PK5" which was the fifth monk seal born this year, was found dead.

Its mother, known as "K28," had non-life-threatening bite marks and puncture wounds on its muzzle, "presumably defending her pups," Prague said. "There were paw prints and signs of a pretty big scuffle." 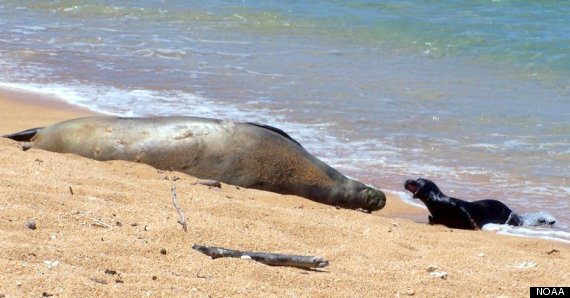 PK5 and its mother (known as K28) together when the pup was still alive.

Close up of K28's non-life-threatening injuries.

Hawaiian monk seals are considered critically endangered with only 1,200 individuals left in the entire species' population.

Officials are not sure whether a feral dog or domesticated pet was responsible for the attack, however, based on the paw prints left behind, Prague believes only one dog was involved.

"This is the first time that a dog has killed a Hawaiian monk seal," she said. "It's an endangered species that was killed so, if it is someone's dog, there's potential for some legal liabilities."

A similar incident occurred a few months before only a mile or two away from the site of the monk seal attack, Prague noted. The Department of Land and Natural Resources (DLNR) reported in January that two dogs, possibly a Great Dane and labrador, were photographed attacking protected Laysan albatrosses while they nested. DLNR reported a total of 26 albatrosses killed that season on Kauai. Prague said they were using photos of the dogs in the albatross incident to see if the two cases are related.

Beyond the immediate death of the pup, officials are also concerned that the dog attack may result in an infectious disease, such as distemper -- an incurable virus that domestic pets have been known to carry -- spreading throughout the Hawaiian monk seal population.

"It is a very tragic even and is very emotional for the volunteers and community members who have been watching over these animals," Prague said.

Below, an image of PK5's fatal injury.

WARNING: The photo below is graphic and may be considered disturbing for some readers. 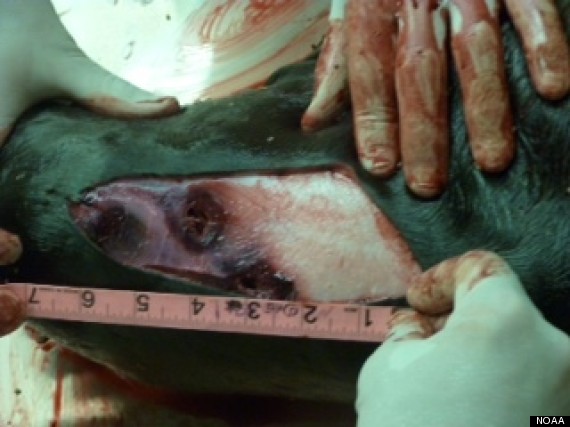