Many great artist personas get 'discovered' from their eccentric appearances before they even make any great art. Such was the case with Pockets Warhol, a white-capped capuchin monkey whose name was inspired by his unruly white hair's resemblance to the Pop master Andy Warhol's.

Because of the uncanny likeness, Pockets was given children's paints by his caregiver at a sanctuary for rescued animals in Ontario, Canada. While most artists use only a paintbrush, Pockets incorporated his "two hands, two feet, a tail, tongue and furry butt" as well.

Pockets has appropriated Warhol classics like Marilyn Monroe and the Campbell's soup cans to his own personal style, a style that critics compare to Jackson Pollock and Joan Mitchell. His career is quickly picking up speed; he has fans as far as Europe and Israel buying his works for 'hundreds of dollars'; Pockets also is having his first exhibition, comprised of 40 colorful, abstract pieces.

Yet, like any great artist, Pockets has an an unpredictable side and has been known to act out. According to his owner "he does have an artistic temperament and can lack concentration, sometimes preferring to eat the paint." 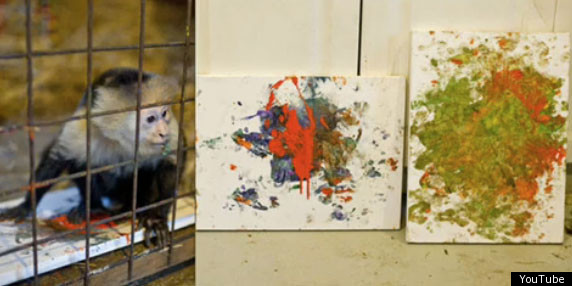 Proceeds from Pockets' exhibition will benefit funding a new barn for his sanctuary. Watch the adorable videos of Pockets in action below.