I stood still and silent in my tracks, soaked in sweat, straining to see the dots making their way toward me through the jungle canopy. Soon the dots became smudges, then fuzzy brown bodies with four limbs swinging through the branches overhead. I felt like I was in the middle of a monkey highway deep in the heart of the Peruvian Amazon. 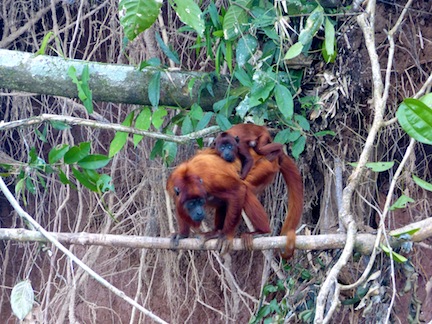 It was the third day of my six-day visit to the Tambopata Research Center (TRC), courtesy of Rainforest Expeditions. It took two days to get here, via a narrow wooden boat with a very big outboard motor. As the boat weaved up the wide, fast flowing river through a maze of partially submerged trees, I watched one of the world's most diverse biospheres slip by. Along the way we saw monkeys, caimans and capybara, the world's largest rodent, and hardly anything else, except for jungle and an occasional wooden shack. Few travelers get this far. 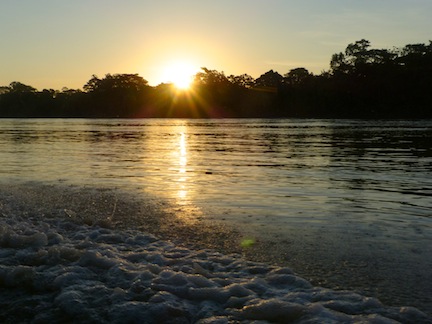 From the river it's a 10 minute hike to the TRC, an active research center for studying the thousands of macaws that visit a large clay lick a mile or so up the river. The TRC also serves as a rustic lodge for a small number of paying guests who want an authentic, full bore jungle experience. And they get it - no fans or air conditioners, just open, airy rooms with mosquito nets and shared baths down the hall. The lodge is made from all natural local materials, especially bamboo, and is raised several feet off the ground on stilts with a high thatched roof covered in dried palm fronds and few external walls to block views or the occasional breeze.

Most important, the animals are close by. A constant cacophony of cackles, screams, and whistles emanated from the curtain of green surrounding the lodge or accompanied me as I trudged, sweating, through the jungle. During these twice daily slogs, often through shin deep mud, I saw four different kinds of monkeys (capuchin, red howler, saddleback tamarind and squirrel), different colored macaws (yellow, blue, white and red), anteaters and wild pigs. One morning an orchestra of trumpet birds honked an avian version of wild, atonal jazz as they crossed the trail behind me. 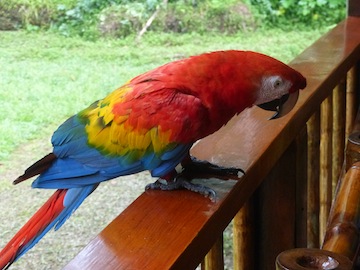 I saw no one on the trails, except for others at the Center, and heard no other sounds other than those from the animals and the patter of drops from the leaves.

Sometimes I didn't have to leave the lodge to see animals. One morning I woke to the sound of snorting. When I realized it wasn't me, I looked over the railing of my room and saw a passel (herd? gaggle? school?) of peccaries (wild pigs) rooting around on the ground just a few yards away. The symphony of snorts continued for close to an hour as the big, bristly pigs circled the lodge heads down, eating almost everything in sight, like a college football team working their way through a Las Vegas buffet. 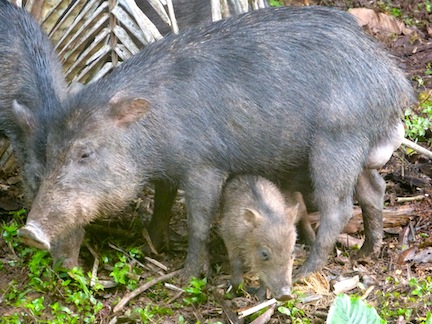 The monkeys were the big draw for me. I could have watched them for hours as they swung from branch to branch, rarely stopping for long to keep out of the clutches of winged predators from above.

I didn't see any jaguars, though. Jaguar sightings are rare, but they do happen. Apparently a jaguar was sighted from the lodge a couple of weeks after I was there. Bad timing, I guess, but I really can't complain.

The weather and climate was something else. When it rained, I saw why it's called a rainforest. The tropical downpour soaked everything, even saturating my very expensive, high tech rain shell. I did better with an old fashioned poncho, but with the condensation of the perspiration trapped inside, I ended up almost as wet as if I had worn nothing, and a lot smellier.

The heat and humidity is a constant presence you can't escape except for a few minutes in the shower. I took at least two showers a day. The pages of my books curled, my camera fogged, my vitamins crumbled and the battery in my Mac Air laptop crapped out. But I soon learned to push it into the background. Besides, it was only for a few days, and it did wonders for my skin.

This was a true adventure -- exotic, remote, sometimes uncomfortable, sometimes exciting and always interesting. For several days I felt like an urban, Jewish version of Indiana Jones. An idea for a movie, perhaps? With a lead character named "Philly Finkelman," played by Larry David? Can't miss. Let me know if you're interested in optioning the film rights.

For more photos and information, check out Don's blog, "The Adventure Geezer," on his website.