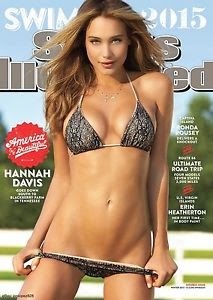 "The apparel oft proclaims the man, " advises Polonius to Laertes. And Thomas Carlyle would write a novel entitled Sartor Resartus, literally "tailor re-tailored." But what about woman? If we take the cover of the recent swimsuit issue of Sports Illustrated, where the model Hannah Davis, flaunts her mons pubis can we conclude that neither clothes nor hair make the woman? The shot leaves little to the imagination, but there is little to imagine. What if Joanna Hiffernan the model for Courbet's "The Origin of the World," who also happened to be an inspiration to Whistler, had struck a similar pose. Hiffernan's pulling her bikini bottom down would have been a far more far more sensational news event. The current epidemic of Brazilian waxing, of which Ms. Davis is apparently the latest public victim (Kim Kardashian's recent spread in Paper is another prominent example of a similar phenomenon) has reduced the female genitalia to a state of pre-pubescent nothingness. Pedophiles must be entralled. The Sports Illustrated issue has raised some eyebrows, but when you scour the newsstand to see what all the hullabaloo is about you almost need to be told that something provocative is going on. A risqué pose with a model in a state of undress is nothing new, but what's disconcerting is to find a sheep in wolf's clothing, a little girl in the guise of a woman. Unless of course you have a predilection for these kinds of things, you could pass the newsstands where the Sports Illustrated cover is brazenly displayed, thinking that the female genitalia had actually been whited out. It's reminiscent of another parable, the Emperor's New Clothes, but also of the experience of dining in one of those trendy new restaurants where you pay a lot for very little and a chorus of praise accompanies minuscule portions which are nearly impossible to see.

{This was originally posted to The Screaming Pope, Francis Levy's blog of rants and reactions to contemporary politics, art and future}