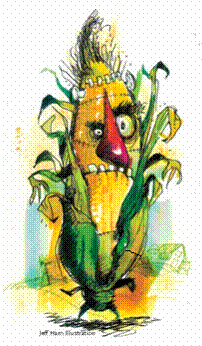 Monsanto is one of the most despised corporations on earth. This is the ninth in a series of articles that expose their not-so-hidden dark side and how, if unrestrained, Monsanto could unleash a cataclysm. Indeed, it has already started...

A greater tragedy may be the harm from the dangerous GM foods produced by Monsanto. The American Academy of Environmental Medicine (AAEM) has called on all physicians to prescribe diets without GM foods to all patients. They called for a moratorium on GMOs, long-term independent studies, and labeling. They stated, "Several animal studies indicate serious health risks associated with GM food," including infertility, immune problems, accelerated aging, insulin regulation, and changes in major organs and the gastrointestinal system. "There is more than a casual association between GM foods and adverse health effects. There is causation..."

Former AAEM President Dr. Jennifer Armstrong says, "Physicians are probably seeing the effects in their patients, but need to know how to ask the right questions." Renowned biologist Pushpa M. Bhargava believes that GMOs are a major contributor to the deteriorating health in America.

GM foods are particularly dangerous for pregnant moms and children. After GM soy was fed to female rats, most of their babies died—compared to a 10% deaths among controls fed natural soy. GM-fed babies were smaller, and possibly infertile.

In Haryana, India, most buffalo that ate GM cottonseed had reproductive complications such as premature deliveries, abortions, and infertility; many calves died. About two dozen US farmers said thousands of pigs became sterile from certain GM corn varieties. Some had false pregnancies; others gave birth to bags of water. Cows and bulls also became infertile.

In the US, incidence of low birth weight babies, infertility, and infant mortality are all escalating.

Monsanto's GM corn and cotton are engineered to produce a built-in pesticide called Bt-toxin—produced from soil bacteria Bacillus thuringiensis. When bugs bite the plant, poison splits open their stomach and kills them. Organic farmers and others use natural Bt bacteria spray for insect control, so Monsanto claims that Bt-toxin must be safe.

The Bt-toxin produced in GM plants, however, is thousands of times more concentrated than natural Bt spray, is designed to be more toxic, has properties of an allergen, and cannot be washed off the plant.

Moreover, studies confirm that even the less toxic natural spray can be harmful. When dispersed by plane to kill gypsy moths in Washington and Vancouver, about 500 people reported allergy or flu-like symptoms. The same symptoms are now reported by farm workers from handling Bt cotton throughout India.

Soon after GM soy was introduced to the UK, soy allergies skyrocketed by 50%. Ohio allergist Dr. John Boyles says "I used to test for soy allergies all the time, but now that soy is genetically engineered, it is so dangerous that I tell people never to eat it."

GM soy and corn contain new proteins with allergenic properties, and GM soy has up to seven times more of a known soy allergen. Perhaps the US epidemic of food allergies and asthma is a casualty of genetic manipulation.

In India, animals graze on cotton plants after harvest. But when shepherds let sheep graze on Bt cotton plants, thousands died. Investigators said preliminary evidence "strongly suggests that the sheep mortality was due to a toxin. . . . most probably Bt-toxin." In one small study, all sheep fed Bt cotton plants died; those fed natural plants remained healthy.

GMOs Remain Inside of Us

The only published human feeding study revealed that even after we stop eating GMOs, harmful GM proteins may be produced continuously inside of us; genes inserted into Monsanto's GM soy transfer into bacteria inside our intestines and continue to function. If Bt genes also transfer, eating corn chips might transform our intestinal bacteria into living pesticide factories.

Biologist David Schubert of the Salk Institute says, "If there are problems [with GMOs], we will probably never know because the cause will not be traceable and many diseases take a very long time to develop." In the 9 years after GM crops were introduced in 1996, Americans with three or more chronic diseases jumped from 7% to 13%. But without any human clinical trials or post-marketing surveillance, we may never know if GMOs are a contributor.