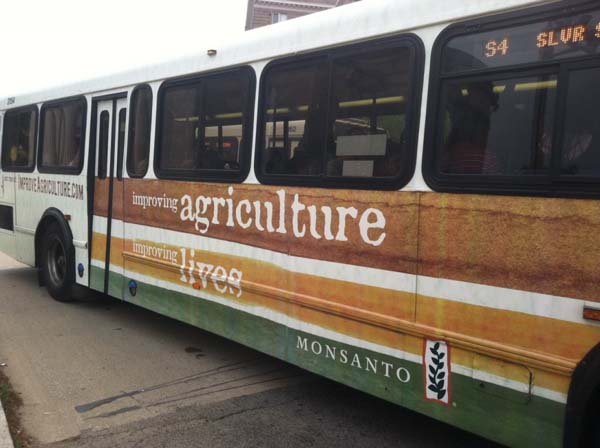 With apologies to Charles Dickens, whose 200th birthday was this week, it's the best of times and the worst of times for Monsanto, the agribusiness giant that is aggressively marketing genetically engineered crops -- and millions of tons of pesticides -- worldwide.

It's the best of times because its stock is soaring. Sure, the St. Louis-based leviathan has been up before -- and down. In 2009, Forbes magazine proclaimed it company of the year. The next year its stock tanked, and Mad Money TV host Jim Cramer proclaimed it the worst of 2010. Now its up again, and last month Forbes was hyperventilating over the fact Monsanto has outperformed most high-tech stocks over the last five years.

But just like the plot in Dickens' Great Expectations, Forbes' rosy scenario is not the whole story.

You may vaguely remember the 19th century novel from high school English. According to a column in last Sunday's Washington Post, its main lesson is: "You will never fully comprehend the most important events in your life while they are happening. Any plans you make will not work out -- and you may grow up to be a jerk. If you are lucky, however, a series of traumatic events will wake you up and show you how insufferable you have become."

If you replace the book's protagonist Pip with Monsanto and look at the company through the prism of science instead of its stock profile, my tortured analogy makes sense. Despite more than 20 years of research and 15 years of marketing, Monsanto's great expectation that genetic engineering would dramatically increase food production and reduce pesticide use has been dashed. Unlike Pip, however, the company has not yet woken up to the fact that its products don't perform as advertised.

That's why it's also the worst of times.

Doug Gurian-Sherman, a molecular biologist with the Union of Concerned Scientists (UCS), has spent quite a bit of time investigating Monsanto's track record. In April 2009, he published "Failure to Yield," the only comprehensive study to date that separates genetic engineering's contribution from other factors that can increase yields. After reviewing two dozen academic studies of corn and soybeans -- the two primary genetically engineered food and feed crops in the United States -- he found that genetically engineered traits in herbicide-tolerant soybeans and herbicide-tolerant corn have not increased yields, and insect-resistant traits have improved corn yields only marginally. The substantial increase in yields for both crops over the previous 13 years was largely due to traditional breeding and better agricultural practices, not genetically engineered traits.

More recently -- just a few days ago, in fact -- Gurian-Sherman and his colleagues in UCS's Food and Environment Program posted a web feature, "Eight Ways Monsanto Fails at Sustainable Agriculture," documenting how Monsanto has broadly failed to deliver on its promise to increase yields, safeguard the environment, and protect farmers' livelihoods over the long run.

"Monsanto talks about 'producing more,' 'conserving more,' and 'improving lives,' but it's a PR fantasy," said Gurian-Sherman. "In reality, the company is doing a great job selling more engineered seeds and herbicide and fattening its bottom line at the expense of the environment. To be sure, there are a lot of farmers who buy Monsanto seed, but they buy it mainly because it's convenient, it saves them time, and it does kill some pests. That doesn't mean that it's better for the environment."

Besides the fact that Monsanto's genetically engineered traits have failed to substantially increase yields, its heavy promotion of crops designed to be impervious to the company's RoundUp herbicide has inadvertently created resistant "super" weeds, UCS experts report. That not only can make farming more difficult and costly, it forces farmers to use even more herbicides, which threatens the environment and public health.

Given the unvarnished facts, how has Monsanto been able to convince anyone that it is, according to its latest PR effort, "improving agriculture and improving lives"? In large part by spending tens of millions of dollars annually on advertising, lobbying and campaign contributions.

In the fall of 2008, Monsanto launched an advertising campaign that continues to this day. An outgrowth of the company's "sustainable yield initiative," it has targeted opinion leaders and federal policymakers with full-page ads in the Atlantic Monthly, New Yorker, New Republic and other elite publications, as well as with posters in subway stations, on bus shelters, and on the sides of metro buses here in Washington.

Last year, Monsanto spent $100 million on the ad campaign, down slightly from the $120 million it spent in 2010, according to Securities and Exchange Commission figures. The company also spent $6.37 million on lobbying--more than any other agricultural company or trade group--and so far has contributed more than $170,000 to political campaigns in the 2011-2012 election cycle, the third highest in the agricultural sector.

Monsanto's claims in earlier ads were more explicit than ones circulating now. For example, an ad on the New Yorker's back cover that ran the same week Gurian-Sherman released his "Failure to Yield" report back in 2009 stated: "Providing abundant and accessible food means putting the latest science-based tools in farmers' hands, including advanced hybrid and biotech seeds. Monsanto's advanced seeds not only significantly increase crop yields, they use fewer key resources -- like land and fuel -- to do it. That's a win-win for people, and the earth itself."

The best response to Monsanto's misleading ad campaign? A well-worn quote from Great Expectations: "Take nothing on its looks; take everything on evidence. There's no better rule."

Elliott Negin is the director of news and commentary at the Union of Concerned Scientists. For information on how to get involved with UCS's effort to set the record straight on Monsanto, click here.