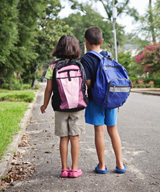 Ollie Oxen isn't free anymore. I remember the familiar call of "Ollie Ollie Oxen Free" from my childhood as neighborhood children freely played outside until dark. The phrase is from an Old English game that ended when anyone still hiding could come back without fear of being tagged. "All's out come in free." Those were easy times when monsters lived within our imaginations, not in the house next door.

I recently received an alarming email: A registered sex offender has moved down the street. I clicked on the link and stared into the face of a 49-year-old man who had been convicted of sexual battery of a minor child a dozen years earlier. Because my small granddaughters often visit and we regularly scamper to the nearby playground and swimming pool, I immediately recoiled in shock. Why did he move here? Is he still dangerous? What are the laws? How can I protect my grandchildren?

Here are some sobering facts from the U.S. Department of Justice:

* Approximately 150,000 adult sex offenders are currently in state and federal prisons throughout the United States. Between 10,000 and 20,000 are released to the community each year.

* Approximately 30% of sexual assault cases are reported to authorities. More than 63,000 cases of child sexual abuse were reported in 2012.

* According to the Bureau of Justice Statistics' National Criminal Victimization Survey, in 2012, there were 346,830 reported rapes or sexual assaults of persons 12 years or older.

* State laws have specific regulations and laws that mandate the offenders cannot live near schools, playgrounds, or swimming pools.

* The best actions for a parent or grandparent are to know where the offenders live, watch the children at all times, educate them about stranger danger, and be prepared to confront anyone suspicious and notify authorities.

Parents have the primary responsibility to raise their children, but grandparents play an important secondary role. The adults should talk to children about inappropriate touching, listen to their opinions, and create a family safety plan. Support the parents as they routinely discuss the differences between normal, healthy sexuality and sexual abuse. Learn how predators operate, and monitor social media and other online activities. Refuse to live in fear but error on the side of caution.

Various websites, such as Stop it Now , offer details and suggestions so families can become educated about the realities of registered sex offenders. More clarification is necessary in many of the descriptions. For example, a mutual dalliance between a 19-year-old young man and a 17-year-old girl is common but can unfairly receive the same label as the horrific acts of a 50-year-old man sexually assaulting a child.

My new neighbor served jail time for his crimes, and I won't be taking him a welcome basket with cookies. From my front door, I can see his house and our neighborhood playground. Maybe he has reformed. Maybe he hasn't. His conviction has robbed our neighborhood of complacency and turned us into vigilantes. The carefree sounds of laughter from my childhood summers are silenced by a heavy click from the turning of the lock.