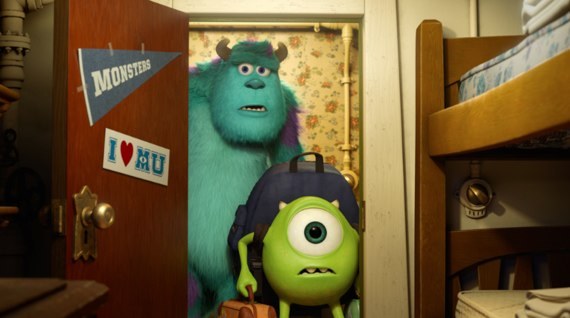 The idea of seeing Monsters University did not appeal to me. Here's what I remember about the first film in the series, Monsters Inc.: (A) I liked it and (B) I paid to see it only because the trailer for Attack of the Clones would be shown before the movie started. Other than that, the details are hazy. (Perhaps I did not pay attention as much as I should have because I was overwhelmed by anticipation, tragic in hindsight, for Attack of the Clones.) Regardless, its prequel, Monsters University, is a delight for no other reason than its plot is so simple.

(To be fair, I did enjoy Man of Steel's world engine. And I love that this term is now part of our lives.)

In a nutshell: Mike and Sulley (who are strangers at this point) are both accepted into the scare program at Monsters University. Sulley is a natural and is also a legacy to the program. Mike doesn't have the raw talents, but works extremely hard. The two learn from each other along the way over a series of challenges reminiscent of something from the last half of Old School. Again, the characters drive the story, not an overindulgent plot.

There is a point to be made here: if you have lovable (or at least interesting) characters, just having them need a reason to be around each other and watching them interact can be enough. I mean, this was pretty much the basis for nine seasons of Seinfeld.

Please, please, please remember that I said the characters have to be lovable or interesting. Once we get past the heavy back-story, After Earth is a relatively simple movie. Unfortunately, the two characters that we spend any amount of reasonable time with are boring. I am starting to fall asleep just typing about them.

The thing is, before seeing Monsters University, I didn't realize that our brains needed the rest. Not that the other movies are so smart that we need to pay close attention to follow them, but it's nice to not have to be constantly questioning why characters are constantly choosing the more difficult of two paths without finally admitting, "Well, if they had used the blood from one of the bodies on board the Enterprise, I suppose there would be no need for a climatic fight."

I am positive that Monsters University will be a huge success and doesn't need to market itself as "the simplest movie of the year" to make money. (To be fair, I have no idea how one would go about determining if one particular movie is the simplest or not. What would be the parameters? For the sake of argument, let's just agree that, of this summer's big studio movies, Monsters University is the simplest.) But, I know there are people out there like me. There are people who have no real interest in seeing Monsters University, yet, might just like the idea of a simple story with a simple plot that leaves you in a good mood.

And, as an added bonus, the trailer for Attack of the Clones does not play before the movie starts.