GREAT FALLS, Mont. — A Roman Catholic bishop says a central Montana parish is about evenly divided over a new priest's decision to prohibit a gay couple from receiving Communion unless they divorce, live separately and write a statement affirming that a marriage is between a man and a woman.

Bishop Michael Warfel of the Diocese of Great Falls-Billings met Saturday with about 300 parishioners of St. Leo the Great Catholic Church in Lewistown, where he also led a Mass. About half the parishioners supported the Rev. Samuel Spiering's decision, while the other half were very angry, the Great Falls Tribune reported.

"There obviously is polarization, and certainly what I want to do is try to effect some healing," Warfel said Saturday. "At the same time, as a Catholic bishop, I uphold our Catholic teachings."

Tom Wojtowick, 66, and Paul Huff, 73, are longtime Catholics and have attended St. Leo the Great since 2003. Both sang in the choir, and Wojtowick is an organist.

The men have been in a committed relationship for more than 30 years and were married in a civil ceremony in Seattle in May 2013 to protect their finances as they age.

"We didn't think anything would happen, church is one thing, civil society is another," Wojtowick told KULR-TV. 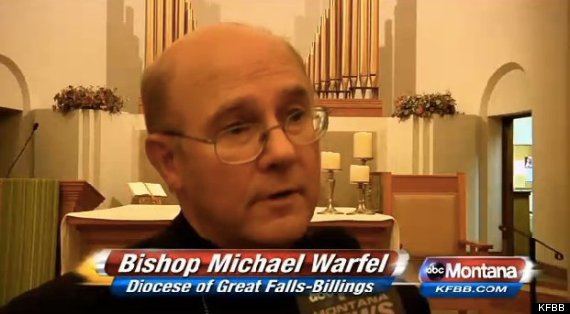 Warfel has said it was his understanding that the men did not publicize their marriage, but once it became known in the town of 5,900 people, it had to be dealt with publicly.

Spiering, 27, met with the men in early August, shortly after being assigned to the Lewistown parish.

"These men have been in this parish for years. We've had other priests and nothing was different 'til now," said Austin Weidner.

"I still want to go back to church, but if it doesn't happen, I'm OK with it" Huff said. "I still have a strong faith."