Montauk, N.Y., is a picturesque, oceanside resort community on the tip of Long Island, where the rich and famous have fun in the sun. Montauk is also known for Camp Hero, a decommissioned Air Force base.

Conspiracy theorists and people who say they have spent time there claim Camp Hero was once used for bizarre, secret experiments that included mind control, time travel and contact with extraterrestrials. All of these claims are presented in "Montauk Chronicles," a new movie that has its world premiere Friday in the resort town.

While the movie features interviews with real people, much of the film centers around dramatic recreations of events they claim happened to them.

"When you walk through the area, you see this giant, imposing radar tower that still stands," said Christopher Garetano, executive producer, writer and director of "Montauk Chronicles." "Above ground, there are also huge doors, or bunkers, cemented and sealed into the sides of several hills in the forest area."

Throughout the wooded park area are what appear to be manhole covers -- capping passages that lead where? 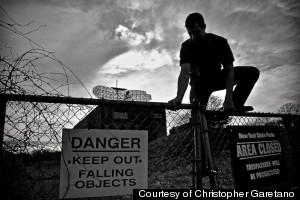 "These obviously go down into something," said Garetano, pictured left at Camp Hero. "Some people claim that these are entrances to underground tunnel systems that ran beneath the military base that would supposedly bring you to the actual entrance of the facility."

Camp Hero's roots are traceable to the Revolutionary War, when it was a facility to test military cannons. During World War II, the base was an important coastal defense against potential Nazi intrusions.

"Montauk Chronicles" tells the story of three men, Alfred Bielek, Stewart Swerdlow and Preston Nichols, who claim they were involved when Camp Hero reportedly became an underground site for scientific experiments and atrocities.

"At first I didn't believe their stories," Garetano told The Huffington Post. "These men have not benefited financially -- they didn't gain anything from this, and they've endured ridicule as they maintained their story."

Bielek, a retired electrical engineer who recently died, told of being part of the legendary Philadelphia Experiment in 1943, in which the U.S. Navy is said to have tried to make a destroyer undetectable to radar.

The way Bielek's story unfolded, the Navy test ended in disaster, causing the ship to supposedly travel through time. He maintained that he was recruited in 1970 to work on mind control and time travel projects at the Montauk secret facility.

"Alfred claimed he was a programmer who designed sequences where kidnapped boys were experimented on to become psychic spies and he said he was part of these psychic manipulations," said Garetano.

Nichols, like Bielek, was an electrical engineer. He says he worked with Bielek at the Camp Hero location and that he also saw extraterrestrials there.

"We had the little grays and larger grays as well as a variety of reptilian beings," said Nichols. "The large grays didn't want anything to do with me. ... When I entered a room, they would leave."

The Mystery of Montauk, NY

Swerdlow, who said he was one of many young boys kidnapped from their homes, claimed he was taken to the Montauk base and subjected to experiments.

"Beatings, a lot of torture, electrical shock, burials, near-drownings -- they'd bring you to the point of death and then they would save you, and the person doing this would be your rescuer and would say, 'I'm the one that saved you and remember that.' And that became your handler," Swerdlow recalled in the film.

After spending so much time with the men whose claims included the creation of a beast from thought waves, Garetano had many doubts about the movie he created. "I don't just want to dismiss everything they said. They were subject to a lot of ridicule, but stayed consistent with what they said for many years, including Alfred right up until his death," said Garetano.

The filmmaker admitted he was affected by his involvement with his movie subjects. "The one thing that Preston and Alfred acknowledged was the fact that they seemed a little crazy, but they said there was a reason for that -- they felt it was being done to them," Garetano said. "I would think if I was exposed to all of this for a certain number of years, I would go crazy, because I was going crazy making this movie!"

"Montauk Chronicles" will premiere at Gurney's Inn, an 86-year-old celebrated resort, pictured below, just a few miles from Camp Hero.

"There are a lot of good stories about that area out there. When I came out here in the 1960s, the Air Force still had an active base, so most of the kids I went to grade school with were kids from the base -- they were Air Force brats," said Paul Monte, the general manager of Gurney's Inn and president of the Montauk Chamber of Commerce. 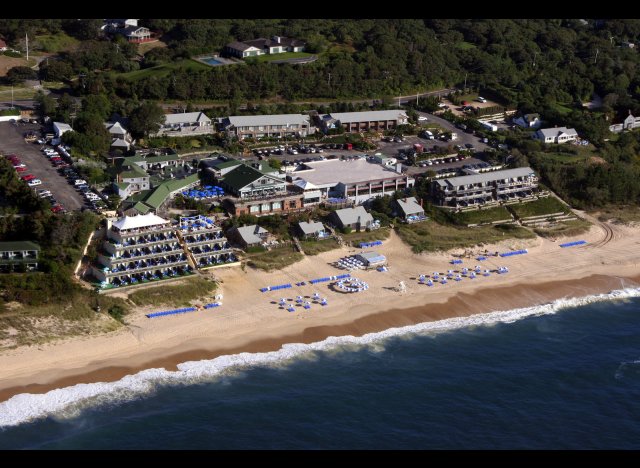 "I remember stories about time travel and secret underground experiments and aliens," Monte said. "Through the years, we've seen lots of characters in Montauk and we've often used that explanation to explain their existence."

Monte told HuffPost that many of the legends of the Camp Hero facility ring true to him and residents of the area. "Oh, I believe that there were things going on there back in the 1940s and '50s -- that some level of government activity was taking place out there," he said. "The fact that we had an Air Force base out here in Montauk, which was a very remote area during that time, and the fact that it was set up in such a way as to disguise it as a little fishing village so that it wouldn't appear to be what it actually was for many years -- I think there's probably some truth to the fact that there were things going on here that were a little bit outside the norm."

Not to be left out in the weirdness that sometimes surrounds Montauk, Monte counts himself as one of many UFO eyewitnesses in the area.

"People look at me a little funny when I tell them about my experience one night in the early 1980s. I followed a very odd light that was at treetop level for about 12 miles, almost out to Camp Hero before it disappeared. It wasn't a plane or star, and it was tracking pretty much as I was driving.

"I still hang on to my beliefs that there are definitely other things out there, and I'm sure they've been here and we're not alone."