In a year when a respected investigative journalist suggested that the Roswell UFO scare may have been the handiwork of Nazi war criminal Josef Mengele and Joseph Stalin, along comes another story involving space aliens and outrageous experimentation on a U.S. military base.

Montauk, N.Y. -- like Area 51, written about in Annie Jacobsen's new book -- has been the center of an otherworldly conspiracy theory for decades.

Believers say that people were kidnapped at a U.S. Air Force base and subjected to mind control and time travel experiments. And extraterrestrials somehow had a hand in it all.

It's been dubbed "The Montauk Project," and is the subject of an upcoming docu-drama, "Montauk Chronicles," executive produced, directed and written by independent filmmaker Christopher Garetano.

But nobody has been able to actually prove these allegations. And all that's left of the Montauk facility -- currently a state park -- are the above-ground remnants of the original Air Force base. According to a document issued by the Air Force Historical Studies office, the Montauk base, known as Camp Hero, was decommissioned in the early 1980s.

Montauk is a small seaside resort town on the tip of Long Island that draws vacationers to its shores every year. Camp Hero, located a short distance outside of Montauk, has roots as far back as the Revolutionary War, during which it was used to test military cannons. Later, during World War II, Camp Hero served as a coastal defense installation against any possible Nazi intrusions into America.

"Montauk Chronicles" follows the story of three men, Alfred Bielek, Stewart Swerdlow and Preston Nichols, who claim that Camp Hero ended up as an underground site for scientific atrocities.

Bielek, a retired electrical engineer, maintains he was part of the mysterious Philadelphia Experiment, where in 1943, the U.S. Navy allegedly tried to make a small destroyer undetectable to radar. The test ended in disastrous results, including the ship disappearing from the Philadelphia Navy yard and -- purportedly -- traveling through time.

According to Bielek's story, he was transported ahead in time from Philadelphia, and extraterrestrials were responsible for the technology used in the Philadelphia Experiment. He also maintains he was recruited in 1970 to work on mind control and time travel projects at the Montauk facility.

Swerdlow's story involves being kidnapped as a teenager from his Long Island, N.Y., home, taken to the Montauk base, and subjected to a variety of experiments.

"Beatings, a lot of torture, electrical shock, burials, near-drownings," Swerdlow said. "They'd bring you to the point of death, and then they would save you, and the person doing this would be your rescuer or god, and would say, 'I'm the one that saved you and remember that.' And that became your handler -- your programmer."

Swerdlow recalls being part of some horrific experiments while at the Montauk facility.

"The walls were very damp, oozing water, so it appeared to be deep underground or even underwater. I was always on this cold, hard table. Sometimes there'd be other people around, either my age or older, and electrodes were put into me and injections."

All three men claim to have seen extraterrestrials while at the underground Camp Hero facility.

"Well, there were quite a number of aliens at Montauk," said Bielek. "Some were there on a semi-permanent basis. A lot of them were just visitors that came in and looked at what they wanted to see and went back home.

"There were little grays there, which I suspected were degenerated humans from out of the future. Large gray aliens (which are a different species) were also at Montauk, and they were highly intelligent."

Nichols, like Bielek, was an electrical engineer, who says he worked with Bielek in the mind control and psychic aspects of the Montauk Project.

"There were definitely alien beings at Montauk," Nichols said. "We had the little grays and the larger grays as well as a variety of reptilian beings. The large grays didn't want anything to do with me because they couldn't reach me telepathically. When I entered a room they would leave.

"They were the strangest thing that I ever saw. At that point, I was beginning to doubt my own sanity."

And Swerdlow also saw an alien presence at Montauk. "Most of the time my interaction was with human beings, but I did come into close contact with alien beings.

"I did see, occasionally, intelligent reptilian humanoid beings as well as gray aliens who were once human beings but were physically altered as a result of degeneration and radiation toxins in their system. Most of them communicated with mental telepathy."

Garetano shot much of his upcoming film at the actual site of Camp Hero.

"When you walk through the area now, you see this giant, imposing radar tower that still stands," Garetano told AOL Weird News. "The park currently has strange regulations: You're not supposed to use any radio equipment there and you are cautioned about unexploded ordnance.

"While filming my movie here, I couldn't understand why people are allowed to walk around a park where there are still unexploded devices or why radio equipment isn't allowed if the radar tower is now defunct and the entire base is completely non-operational."

That question may be answered by a brochure issued in 2001 for visitors to Camp Hero which includes a section called "Unexploded Ordnance (UXO) Warnings":

Please follow the following steps if you think you have come across Unexploded Ordnance:

Avoid any area where UXO is located.

Garetano thinks it's "strange that they don't want you to use radio devices that may set off unexploded bombs, yet they allow the public to walk around a potentially high danger area!"

In addition to the giant abandoned radar tower at the Camp Hero site, there are also huge doors, or bunkers, cemented and sealed into the side of several hills in the forest area.

Also, strewn throughout the wooded park are numerous things that appear to be above-ground manhole covers.

"These are entrances that obviously go down into something," Garetano said. "There are claims from people that these are entrances to underground tunnel systems that ran beneath the military base that allegedly would take you to the true entrance of the facility."

Among the bizarre things claimed by the individuals who say they took part in the Montauk events was a device they called the Montauk Chair. Allegedly, a powerful psychic sat in the chair and was able to materialize objects out of thin air -- manifesting them into physical reality.

After spending countless hours with the men who are the subjects of his film, Garetano says he didn't always believe their stories.

"At first I didn't. These men have not benefited financially -- they didn't gain anything from this. And they've endured ridicule as they maintain their story," Garetano said.

To be sure, this story is filled with allegations, suppositions, unsupported claims and far-out "Stargate 1"-type movie and television science fiction. It certainly describes any typical urban legend.

The Montauk Project shows no signs of going away anytime soon.

Montauk Project: New Film Takes On Allegations Of Mind Control, Time Travel And Alien Encounters At Military Base
The Mystery of Montauk, NY 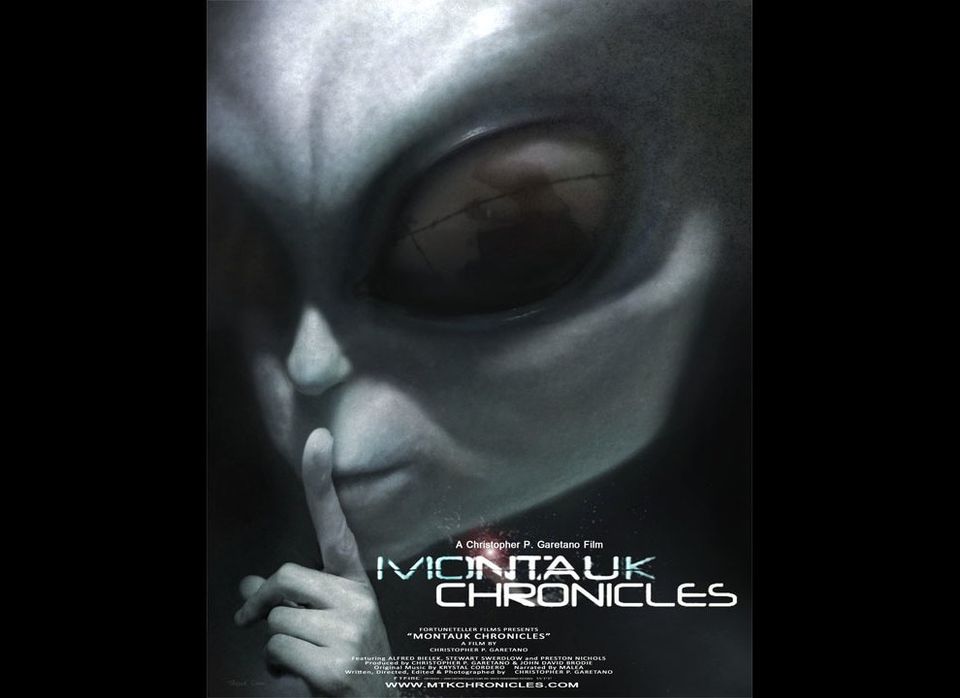