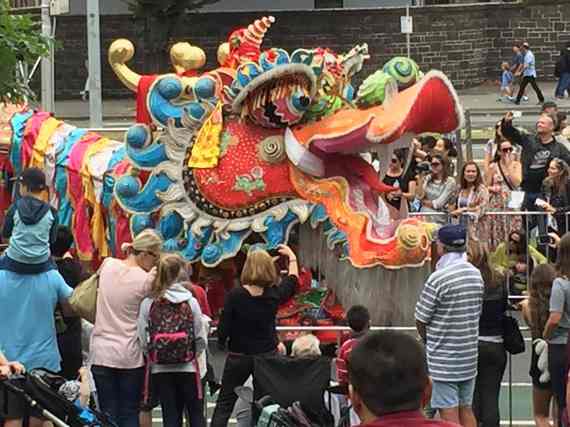 Read Moomba in Melbourne: Asia in Ascendancy and the Decline of Labour in Oz Part I

I mentioned in Part I that the Moomba Festival always take place on Labour Day weekend. Labour Day in Australia is much like the national holiday in the United States in that it takes place at a time generally marking the end of summer and is supposed to honor each country's labor movement. However, similar to the U.S. scene, scarcely a mention of labor and its history was made at the parade or in the general media in and around this holiday ostensibly honoring it.

Labour Day in Victoria specifically honors the winning of the eight-hour work day in Melbourne by stonemasons in 1856. But unions in Australia, like in the U.S., are hurting in terms of losing members and power overall as manufacturing has moved overseas (especially to aforementioned Asia) to be filled with jobs in service and finance which traditionally have not been unionized. While in the U.S., organized labor is strongly associated with the Democratic Party, in Australia organized unions are an integral part of and represented by the Australian Labor Party (ALP).

The ALP's constitution actually contains phrases like the ALP "is a democratic socialist party and has the objective of the democratic socialisation of industry, production, distribution and exchange, to the extent necessary to eliminate exploitation and other anti-social features in these fields." There have been major refinements in the ALP stated goals since 1921 when this resolution was passed including a commitment to a "competitive private sector" and the ownership of private property.

Nationalization of industries has not been part of the ALP platform since the 1940s. But I wanted the reader to have a sense of the relative left wing social democratic side of Australian mainstream politics compared to the U.S. Many feel that both the ALP and the Liberal Party (which is the conservative political party of Australia - read a previous Letter on the origins of that incongruous name) could easily fit within the Democratic Party of the U.S.

I haven't experienced much of direct Labour influence in the eight months I've been living in Melbourne. The federal government has a Liberal majority with the National Party as their coalition partners. Malcolm Turnbull, after replacing Tony Abbott in a bloodless party putsch, remains personally popular and may call for general elections as early as September of this year. The ALP is the majority in the Victorian State parliament with Daniel Andrews, their premier. I can't say that Andrews is the equivalent of an American state governor but that's the closest comparison I can offer.

The strength of labor was evident during a transit workers slowdown to protest attempts at changing working conditions by the Melbourne municipal transport organization, Public Transport Victoria (PTV). Ultimately after a week or two of no trams in the middle of the day, the PTV backed down and made only minor changes in work rules, mostly as face saving as far as my analysis went. I was impressed with the power of the union and wondered if the public would have been as neutral and patient with a strike by BART workers in San Francisco.

But otherwise, labor is regularly part of news which highlights corruption within unions or in the agencies assigned to regulate them. Labor leaders find themselves repeatedly answering the equivalent question of "When did you stop beating your wife?" Corruption is virtually assumed by the public to be a routine part of union activity. There's much shoulder shrugging along the lines of "What can you do?" but government agencies are constantly announcing yet another investigation.

Overall, I've repeatedly said that the Aussies are better than America at maintaining a balance between the efficiencies and amorality of the market place. Americans continue with a greater belief in libertarianism. Now two Gilded Ages separated by one hundred years, have brought forth, in response to increasing income inequities, populist candidates like William Jennings Bryan and Donald Trump. The ALP is part of Australia's equation for fairness. With a more equitable social balance and situated at the gateway to the coming Asian economic dominance, I predict Oz will be a very attractive place for young Americans to consider living in the coming decades. I know I'm coming back.

Our Australian language lesson is relatively short in this Letter:

• arvo - (Australian slang) the afternoon • bodgie - (I think I've done this one before) a juvenile delinquent, youthful trouble maker • negative gearing -- is a practice whereby an investor borrows money to acquire an income-producing investment property and expects the gross income generated by the investment, at least in the short term, to be less than the cost of owning and managing the investment, including depreciation and interest charged on the loan (but excluding capital repayments). P.S. This is a big deal right now in Australia because the investor is allowed to totally write off his losses against other income. The negative gearing tax policy has been seen as one of the factors leading to booming housing prices putting a home in an Australian major city out of the reach of the young aspiring middle class. Sound familiar to Americans? But I've never heard of the term - I believe the closest American equivalent is "leveraged buyout" but that is generally limited to describing corporate takeovers.

Anyway, Sayonara for now. Until next time...