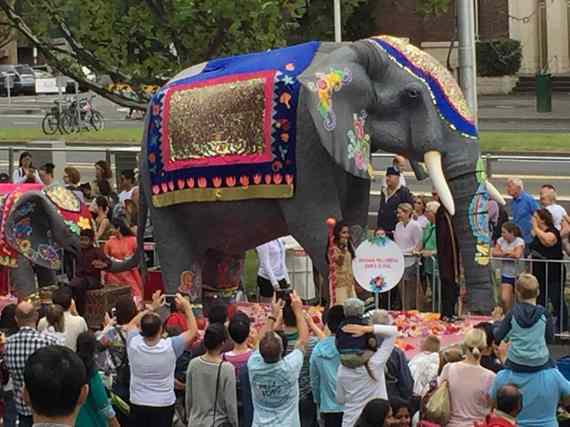 Moomba in Melbourne? If you're not an Aussie I hope you're asking yourself, "What the hell is Moomba?" I suspect a lot of Aussies who live outside of Melbourne would not know this word as well. Even if you're a Melbournian you might not know that the meaning of this indigenous Aboriginal word continues to generate bemused controversy.

Moomba's official meaning reads, "Let's get together and have fun!". However, noted Aboriginal linguists and natives, themselves, insist that "mum" or "moom" means buttocks or anus and "ba" means in or up. Essentially then "Moomba" means "up yours." The possibility that the name of Melbourne's longest running (sixty one years) cultural festival is an epithet doesn't seem to bother the city fathers who sponsor the event. This type of irreverence is quintessential Australian.

Moomba got started as a festival honoring fifty years of Australian Federation. Then they held a parade when Queen Elizabeth showed up in Melbourne for the first time as a reigning monarch in 1954. Moomba was codified as a statewide holiday for Victoria to be held during the Labour Day weekend (always a Monday as in the U.S.) in 1955. There's been at least a parade every year since.

There are other zany events going on during weekend. Part of Moomba since the 1960's is the Birdman Event where contestants, male or female, jump off a bridge over the Yarra River attempting to fly as far a possible before landing in the water. This year's winner has won the last nine times with a very effective hang glider. But many of the entrants wear contraptions (like a mock up of the U.S. Space Shuttle) that immediately crash into the water. Consider the silent films of pre-Wright Brothers attempts at flight and you have an idea of the Birdman Event during Moomba.

Many Melbournians have never been to Moomba. I think for natives, it's rather like my never having been to the Statue of Liberty when I grew up in New York or taking forty years living in San Francisco and the East Bay before ever getting to Alcatraz (I finally got there to see the Ai Wei-Wei exhibit). However, for the visitor (even one like myself who now has been in Melbourne for eight months) an opportunity to experience the parade could not be passed up - if only from a ethnological/anthropological point of view -- at least that's what I told myself to protect my ego, just in case I just really enjoyed the spectacle and event.

We got to St. Kilda Road (one of Melbourne's widest boulevards lined with rows of trees and green medians for much of way) early and found a rise in the grass to give us a good view of the parade even if we sat on our "mooms". Initially there weren't a lot of people with us. The parade though was about 30 minutes late in starting and by the time the first float came by, the street was lined three or four deep with spectators. It was estimated 85,000 persons watched what was only about a six or seven block parade.

Denise and I didn't know exactly what to expect. I thought we might see something like a cross between a Mardi Gras parade and a July 4th parade in the U.S. I will never forget the one Mardi Gras in New Orleans I did with natives about thirty-five years ago. Piedmont has a lovely, cute, annual Fourth of July Parade that, given the small size of the community, attracts thousands and is a source of civic pride. Well, with the first float, we were blown away.

Sure, it looks like it could be Mardi Gras but quality of the Moomba floats (there must have been at least twenty), dancers and marching bands accompanying the floats, reflected the wide diversity of peoples now living in Melbourne, in particular, and in Australia, as a whole. Some of the floats were absolutely amazing and must have taken an entire year to prepare.

But as the parade progressed (overall it lasted about forty-five minutes), Denise and I independently were struck by the pervasive Asian influence. Countries or regions represented from Asia included Indonesia, Malaysia, Thailand, India, Japan and several Chinese floats.

Mexico and Brazil had great floats, costumes and dancers but hanging out at Moomba brought home two notions previously considered but now made prominent in our collective conscience: the ascendency of Asia (especially China and India) on the world scene and Australia as the English language gateway to this emerging and soon dominant part of the world.

The economies of the world's two most populated countries are humming - not withstanding a potential current slowdown in China. In fact, China's decreased demand for Australian natural ores, especially iron, benefitted Denise and me tremendously in that the Australian dollar actually sank below 0.7 US dollars during our stay, reflecting concerns about the Australian economy. The Aussie dollar was predicted to go as low as 0.65 US dollars but a bump up in the price of iron ore has simultaneously inched (or centimetred) the rate up to 0.75. No matter, Denise and I found Oz in essence, "on sale" during our stay so far since three years ago when we visited the exchange rate was at 1.1 US dollars.

But once again I've gone personal. My main point is that I'm quite bullish on Australia's long term (next two or three decades) economic prospects because of its close relationship to these emerging economies - not only supplying raw materials but providing the English language local bridge to America and the world since the language of business internationally now is English.

In addition, the vast Australian interior holds as yet undiscovered potential mineral wealth of both commonly needed ores like iron but also rare earths as well. The lack of people in the interior makes mining less environmentally difficult though the Green Party here is a potent political force quite vigilant over the potential resources rape of Australia.

You sense the shift occurring all over the country. During and after World War II, Australians moved away from relying entirely on the United Kingdom for its military, economic, and cultural well being to depending much more on the United States. Now, the focus is moving to China and India. Militarily the Aussies are still tightly tied to the United States but it remains to be seen over the long haul how economic factors will influence that relationship.