THE MOON GOOSE ANALOGUE - documentation from Agnes Meyer-Brandis on Vimeo.

Attention all science fiction fans, bio-poets and lovers of the critically-acclaimed film "Fly Away Home." Your seemingly unconnected dreams are about to come true. Why? Because somewhere, in an unnamed region in Italy, an artist has been preparing 11 geese to fly to the moon. 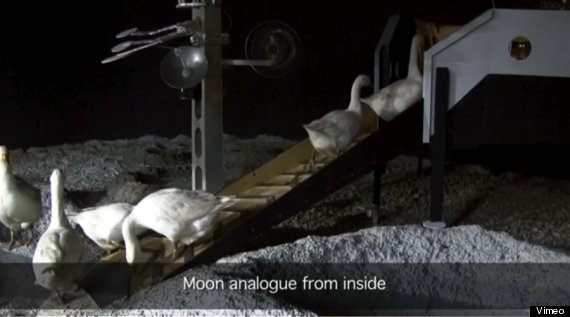 Yes, for a project titled "The Moon Goose Analogue," German-born Agnes Meyer-Brandis has hand-selected a flock of geese to partake in a long-term art experiment inspired by sci-fi pioneer Sir Francis Godwin. The ambitious conceptual artist plans to coax her feathered friends into space à la the 17th century novel The Man In The Moone, mentally and physically training the birds for a lunar adventure set for 2027. 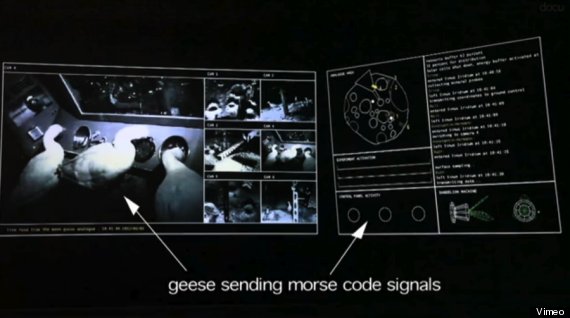 At first glance, the project sounds bizarre, but before you write off Ms. Meyer-Brandis as a contemporary art nut, hear us out. Meyer-Brandis is known for her art-meet-science lens, combining the mythic aspects of natural phenomena with the whimsical nature of installation art in order to push the boundaries of what we accept as possible.

While "Moon Goose" is rooted in the fantastical work of Godwin -- a story that centers on a man traveling beyond Earth's atmosphere with the use of a geese-led chariot -- the project plays by the rules of an actual scientific experiment and adheres to the laws of a world where "moon geese" could really exist.

The real and unreal aspects of the project are outlined in Meyer-Brandis' "The Moon Goose Analogue" documentary (posted above). According to the short film, moon geese were migration birds that annually traveled between Earth and the moon, but were thought to have disappeared centuries ago. So, in an effort to bring the species back to life, Meyer-Brandis has created a moon analogue base, where a new generation of moon geese are being "trained," monitored and analyzed. 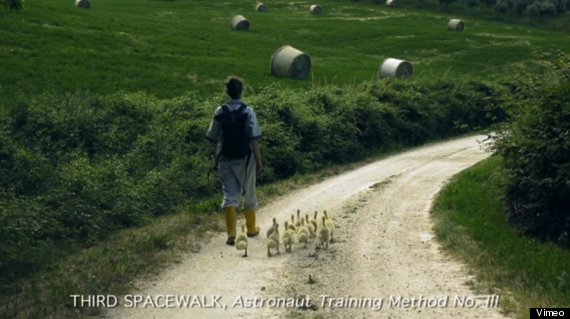 A series of measurement systems have been constructed at the moon analogue base in Italy, ranging from a real gamma ray spectrometer to a not-so-real Intergalactic Goose Machine 9000, which relay information to a mission control center at the Foundation of Art and Creative Technology (FACT) in Liverpool, all in an effort to determine what types of conditions are necessary for the birds to survive in a lunar environment.

The project is two years in and so far the birds have imprinted Meyer-Brandis as their "mother-goose," learned to fly (as geese are wont to do), and accompanied the artist on a series of expeditions.

The little birds have 14 years to go before their actual flight to the moon, so we'll all have to wait to figure out which aspects of "The Moon Goose Analogue" are meant to come to fruition and which are just wild thoughts from Meyer-Brandis' imagination. In the meantime, you can learn more about the Meyer-Brandis' Lunar Migration Bird Facility in the video above. Let us know your thoughts on the project in the comments. 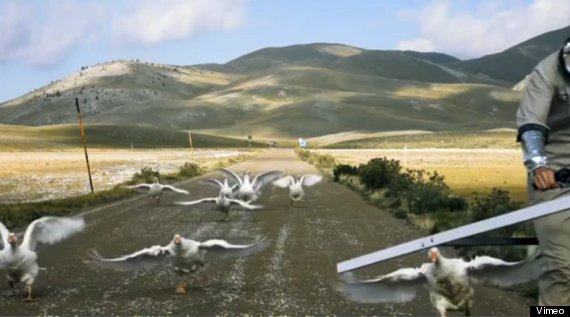