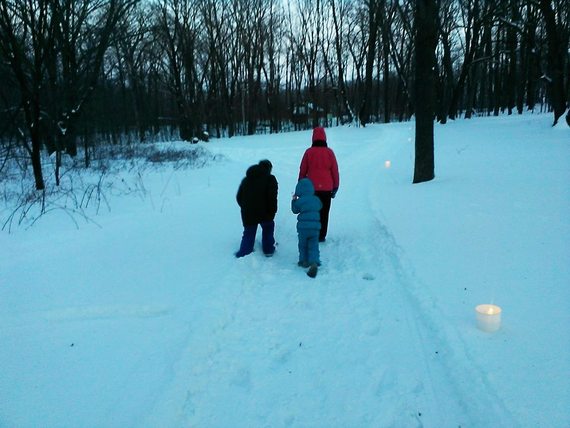 Yep, it was winter, and cold and a wonderful reason to attend the annual Nerstrand Big Woods State Park Candlelight Event.

Hoping to motivate the family, I emphasized that we'd be going "owling." There is a lovely book, a favorite of my kids, Owl Moon in which the father and daughter head out on on a full moon winter's night, in search of a legendary owl. It was enough to pump up the kids with my idealistic, if not chimerical plans.

The park boasted numerous trails illuminated by over a thousand candles, hot apple cider, a blazing bonfire and marshmallow roasting. It sounded downright dreamy to me. The kids were excited and all bundled up properly.

The drive was a mere ten minutes from our house, and we entered a fairly crowded parking lot. I noticed most younger children were being pulled by sled, and the adults were either decked out in cross-country ski gear or snowshoes.

Nikos, my husband, was slightly edgy, but patient enough not to tread upon my optimistic glow. I stopped briefly by the visitor center to ask the park attendant, their suggestion of which trail we should hike. She pointed to the trail directly across the road, and said it was a nice walk, around a mile.

We parked and began our trek. Every trail was lined with hundreds of candles, allowing us to catch our breath and revel in the sheer beauty surrounding us, in which nature can only inspire. Moonlight sparkled upon snow drifts and golden candlelight awakened our hibernating souls. And then the sweet harmony abruptly halted when Elizabeth began wailing in a snow bank, claiming that Nikolas had pushed her. Nikolas laughed until his big sister grabbed his hood and jerked him down beside her. Katerina whined that she was cold, Nikos began asking how much longer -- yes, my forty-something husband, and I clung to my winter wonderland dream like a gold digger with a newfound nugget.

Just as we'd tromped past the first bridge, I'd guess a quarter of a mile, a cross-country skier yelled at us to clear the path. She had quite a booming voice for a little lady, and I jerked the kids off of the path which led them to fall again in the snowbank. While all three kids whined louder than our grumpy cat, with their wounded feelings that their mean mama would throw them into a snowbank, I explained to the skier that the employee at the visitor center had sent us on the trail. The skier lectured that the trail had been groomed for skiing only and that we'd have to hike along the edge, otherwise, we'd destroy the trail.

I was huffing and puffing out of physical exertion tromping though eighteen inches of snow, half carrying one very whiny and tired little girl, whose tiny hands were cold even with her mittens, along the side of the snowbank. I gave Katerina my gloves to wear for added warmth, and it took her exactly three minutes to claim that she'd lost one. I wasn't about to go back and look for it. Then there was my sweetie teenager who naturally blamed me for destroying our family outing by threatening to ground her, Nikolas could not refrain from pushing Elizabeth into the snow repeatedly, not caring two bits if he were grounded, and Nikos who wanted to leave before we'd even parked. It was rough, and I do mean grueling, I can't stand my family at the moment, rough!

We returned to the parking lot and Nikos headed toward the truck, announcing that he'd get the heater going. I swung around, so swiftly I could have done three pirouettes and yelled, "Don't even think about it, Niko! We are going to turn this night around and it WILL be magical!!" Nikos' look was recognizable, the one letting me know that he thinks I'm a crazed nut. Yeah well, it takes all kinds.

At least during the hike through the campground trail, a non-ski trail, we weren't yelled at by anyone. Katerina was wailing louder than any tuckered out kid at Disneyworld, "Mama, I'm fweezing to deaf. I want to go to the bonfire!" I swear she repeated herself five hundred and eighty times! Nikos announced that he had a hole in his boots and wasn't wearing socks. Regardless, I was determined to resurrect this evening.

I shushed Katerina and told her I thought I heard an owl, which perked the interest of Nikolas and Elizabeth. The black spindly trees staged the full moon and the white world in all its lovely stillness, paired with the glowing candles along the path, which filled me very briefly with a warm internal hug until-Katerina belted out a jaw-clinching scream followed by, "Me scared of owls!" She took off running and never stopped, but yelled back that she was going to the campfire. I surrendered-big fat fail.

The blazing bonfire was inviting and the kids attacked the marshmallows. There was a nice elderly volunteer who asked to take our picture. We chatted about the park and how many candles and volunteers it had taken to put on the event. I don't remember what she'd told me because I was glaring at the kids for hogging an embarrassing number of marshmallows.

Once our freezing bones thawed by the enormous fire, we went inside the visitor center for some apple cider and cookies. The warmth of the cider seeped down inside my belly and all was forgiven. I loved my kids and Nikos again and announced that I couldn't wait until next year to do it all over again. But next time, I will work on how awesome owls are until Katerina loves them, and we'd sport snowshoes. Call it miraculous, but somehow and despite its dysfunction, the night had been magical, and I was able to tuck away in my idealistic heart, another sweet memory. 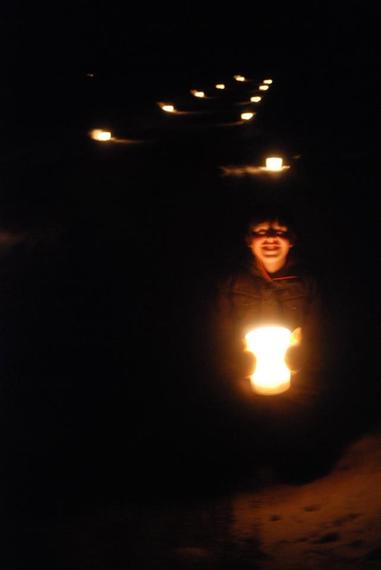