In just his second feature film, writer/director Barry Jenkins tells a compelling story about sexual repression and ambiguity through the eyes of a vulnerable and confused little boy, who grows up to question his sexual identity as a teen and then finds a thin measure of serenity as a young man. 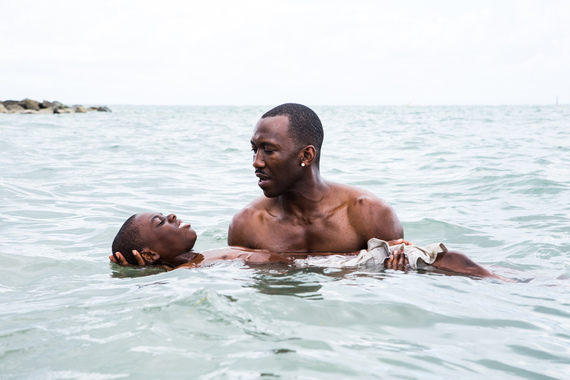 (Photo courtesy of A24)
Alex Hibbert and Mahershala Ali co-star in the drama Moonlight.

Based on Tarell McCraney's theater piece, "In Moonlight Black Boys Look Blue," the film is set in Miami's Liberty City, a thriving middle class African American community in the '40s and '50s that became a lower income neighborhood after the 1960s. The story unfolds in three chapters, three stages in life when emotional and psychological development are crucial for anybody, and inner city males in particular.

Little (Alex Hibbert) is a scrawny kid, growing up in a neighborhood where crime is rampant and much of it is attached to drugs. He has no dad. His mom Paula (Naomie Harris, Skyfall, 28 Days Later) is a nurse who struggles with crack addiction. On a day when he's being chased by bullies, the extremely withdrawn youngster meets Juan (Mahershala Ali, Free State of Jones, House of Cards), a local drug dealer. The two hit it off. Juan becomes a surrogate dad, bringing Little home to meet his girlfriend Teresa (singer Janelle Monáe). The couple and Little's best friend Kevin (Jaden Piner) are the only stabilizing forces in his life.

The boy, as a teen is called Chiron (Ashton Sanders). His best friend is still Kevin (Jharrel Jerome). They've come to a fork in the road, taking two opposite directions, so they think. Chiron is a confused gay adolescent. Kevin is a seemingly very straight kid with a long list of ad hoc sexual conquests. When Chiron is harassed by homophobic schoolmates, in the most public and embarrassing ways, he reaches a breaking point.

As the adolescent becomes a twentysomething young man, he is known by the name Black (Trevante Rhodes). He's adapted. He's the alpha dog drug lord in his neighborhood. He has a calm manner. A bit more assured, yet still very internal. He's learned from Juan that the he can survive, be tough, and yet still be humane. His relationship with his mom is estranged. Kevin is off somewhere else. On the outside Black looks like a cool reserved brother, but on the inside something is not fulfilled.

Filmmaker Barry Jenkins is an artist. That's evident in the visually arresting way he shot the film with the aid of cinematographer (James Laxton). First, opening scenes depict dealers on the street being interrogated by their boss. The camera swirls around them like a bee preparing to sting. Second, Juan takes Little to the beach to teach him to swim. The vision of the burly man holding a very skinny boy in his arms as he floats him on top of the water is reminiscent of paintings of Jesus being immersed in the River Jordan by John the Baptist. Third, a dalliance Chiron has at a beach is more memorable because it isn't graphic. The camera just focuses on a hand making circles in the sand. It's a poetic moment.

Jenkins also intuitively develops the relationships between the boy and his extended family. The scenes between Juan and Little, two totally disparate characters, exhibit a nurturing that is rarely depicted in films focusing on inner city life: Little: "What's a faggot." Juan: "A word used to make gay people feel bad." The relationship between Kevin and Chiron is also very tastefully delineated. Just enough to make audiences wish the two could work out their differences. The tumultuous connection between the needy lead character and his dysfunctional mother is fraught with raw tension.

Creating the extremely fragile protagonist is a stroke of genius. Making him severely withdrawn in the first act is a great character device. Keeping his emotions so internal throughout most of the second act is not the best decision. Although, during this sequence of events there is a memorable and shocking outburst that sets the teen on a different course. Unfortunately for the rest of the film, that cathartic scene appears to be the only real climax. Nothing that follows is as purging and emotionally fulfilling. By the third act, the pacing drags a bit, the lead character is still intimidated by his feelings and his personality seems monotonous.

The final act needed a more dynamic character arc for the brooding inhibited man known as Black. Watching him stammer through the final scenes, when he should have had a major transformation, is frustrating. On the other hand, every time the effervescent Kevin enters a scene the screen lights up with an energy and vitality that evades the main character.

Naomie Harris, who gave a stunning performance in 28 Days Later, is a superb actor. Unfortunately, here interpretation of a drugged out mom is way too showy and over-the-top for the role. On the opposite end of the spectrum, Mahershala Ali underplays Juan, relying on nuances, facial expressions, eye movement and feeling to render his character, a dope dealer, with the kind of heart that films never give men in this profession. He deserves an Oscar nomination for Best Supporting Actor. All the actors who played Little, Chiron, Black and the Kevins do a solid job.

The most intimate moments are caressed by a dramatic musical score (composer Nicholas Britell, The Big Short), which is atypical for urban films. The production design (Hannah Beachler) and set decoration (Regina McLarney) make the settings look real. The costumes design (Caroline Eselin) is virtually invisible, the way it should be. The actors are dressed like real people wearing clothes that look lived in.

Moonlight has become a popular movie on the film festival circuit. It's uncanny blend of strong visuals, social issues, sexuality themes and urban life is a potent mix that endears it to smart filmgoers.