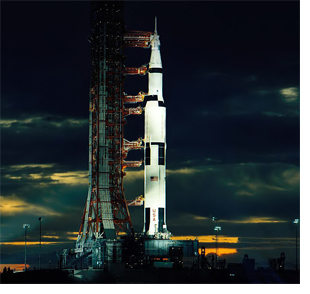 If you watched this year's Super Bowl, you may have seen an ad for Audi's R8 V10 plus. Titled "The Commander," Audi described the ad the following way:

"'The Commander' tells the story of a retired astronaut who rediscovers his lust for life. Viewers watch as the man, surrounded by memories of the golden age of space exploration, sits solemnly, deep in reflection. When his son hands over the keys to a new Audi R8 V10 plus, he gets behind the wheel and relives the thrill of a rocket-like ride under the stars. Viewers watch as newfound life stirs within the Commander. Audi reminds us that amazing things happen when we shoot for the moon."

In the commercial, the former astronaut, refusing his dinner, doesn't appear in reflection so much as clinical depression. Fortunately for the burned out commander, the Audi R8 V10 plus rockets from 0 to glory days in only 2.6 seconds, re-igniting the astronaut's emotional afterburners. A quick spin behind the wheel turns out to be just the tonic the commander needs to transform his dismal terran world. Maybe being marooned on Earth isn't so bad after all.

It's a really good thing that restoring the thrill of lunar exploration is as easy as turning the ignition of a hot German sports car, because Americans can't go to the moon anymore. It's been nearly 44 years since the ascent stage of Apollo 17's lunar module Challenger lifted off from the Taurus-Littrow valley on December 14, 1972. Americans have not set foot on the moon since. As it turns out, we can't afford a return trip. NASA's budget has plummeted back to Earth right along with the commander, falling nearly 90% from 4.41% of GDP in 1966 to 0.47% in 2015.

Even if we could find the money to return to the stars, we still lack the grey matter. Over the decades since America built moon rockets, its students' math scores have burned up on reentry, dropping to 36th in the world.

While the conventional wisdom is that the mighty Saturn V that carried the Apollo astronauts to the moon was lifted into outer space by rocket fuel, in reality, it was carried aloft on the shoulders of the world's best-educated workforce. Many of those rocket scientists were educated courtesy of the GI Bill, which provided a range of benefits for veterans returning from World War II. Nearly eight million veterans took advantage of the GI Bill's education benefits, enabling veterans to get college or vocational education. Management guru Peter Drucker described the GI Bill as "the most important event of the 20th century" and credited it for the rise of America's modern knowledge economy.

Historian Ed Humes said that "the scientists and engineers and teachers and thinkers who brought in the information age, who took us to the moon, who waged the cold war, you name it - all those men and women were educated through the GI Bill." The bill provided education for 14 Nobel Prize winners, three Supreme Court justices, and three presidents.

Moon rockets weren't the only things America was building during its golden space age. During the 30-month period when we sent 21 men to the moon, the north tower of the World Trade Center, the world's tallest building, was completed on December 23, 1970. And, on October 29, 1969, the year Neil Armstrong took one giant leap for mankind, the first message was transmitted on an inter-computer network that would later become known as the "Internet."

These are fond memories of American greatness. America can no longer send rocket ships to the moon, and its tallest building no longer makes the world's top five list.

Moonshots and tall buildings aren't just about national bragging rights. They are biproducts of a country's intellectual quotient and its priorities.

In 2016, some look to restore American greatness by building a great wall. That's actually been tried before. China built one in the 3rd century BC. Over time, they found that, while walls are effective against invading Mongol hordes, they are not terribly useful when it comes to advancing a culture of innovation in the 21st century.

Ironically, while some in America are running the Qin Dynasty playbook to restore American greatness, China has instead embraced America's 20th-century game plan, with particular emphasis on education. Chinese students have the world's highest PISA math, science and reading scores. China also has a rover on the moon, two of the world's five tallest buildings, as well as a planned lunar base. Not coincidentally, China is expected to overtake the US as the world's largest economy in 2018.

By studying America, China has learned well that education truly is the key to success. Somehow, that lesson was lost in translation between generations in America. Education is no longer considered essential so much as elitist. Having lost our ability to build great things, we instead seek to regain the perception of greatness through fast cars and great walls.

Ultimately, America and China's strategies for greatness come down to perception versus substance. China wants to be great. America wants to feel great.