In a heroic battle that spans 10 agonizing minutes, a brave moose mother takes on six wolves trying to kill her baby. Surrounded by predators and standing in shallow water, the huge moose rebuffs the sly wolves, who weave in and out in an attempt to kill the terrified calf.

Despite the mother's best efforts, the wolves eventually overwhelm her and drag the calf away to be eaten.

The dramatic, tragic scene was captured in the summer of 2010 by photographer Patrick Endres, who was working at the time in Alaska's 6-million-acre Denali National Park.

"Backlit in a small tundra pond, the cow moose charged, stomped and splashed," Endres writes in his blog. "It was a real-time spectacle of nature unfolding before our eyes. ... Besides frantically photographing and cheering on the cow moose in her vigilant defense, the odds of survival were obviously slim, and in the end, the wolves were successful in the kill."

The largest of the deer species, moose can weigh up to 1,800 pounds but remain surprisingly nimble on land and are strong swimmers, National Geographic notes. Female moose generally give birth each spring to one or two calves, which stay with their mother until mating season the following fall.

Moose are common in Denali, where they tend to stay close to bodies of water, according to the National Park Service. Wolves are some of the animal's main predators in Denali, but moose are also threatened by human development and grizzly bears. 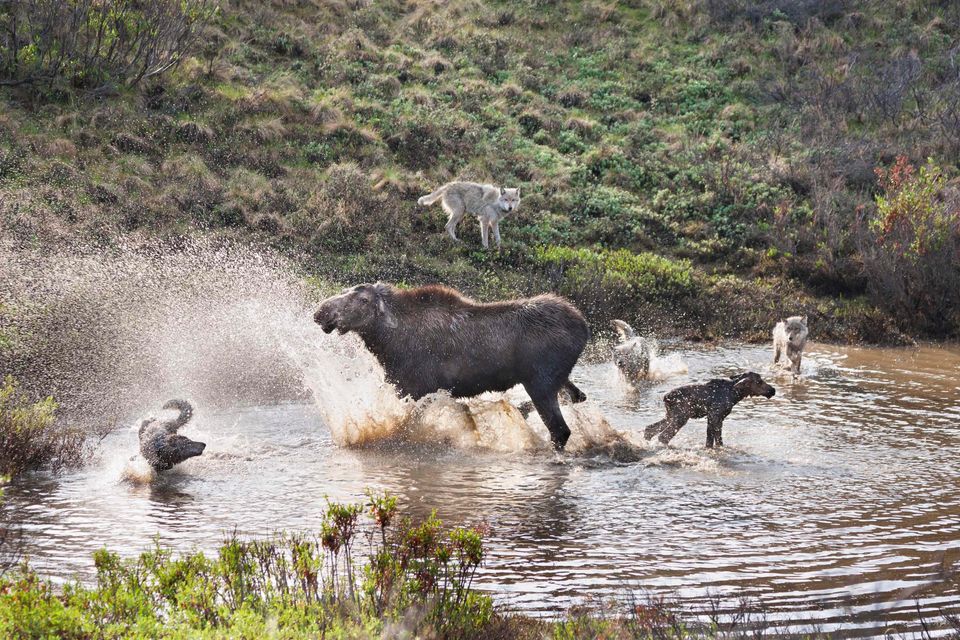 1 / 10
Mother Moose Fights Wolf
A titanic life-and-death battle between a mother moose defending her calf from wolves was caught on camera in 2010. In this thrilling sequence of images, the enormous female moose dwarfs her attackers as they attempt to kill her newborn. Surrounded in a small pond on the Alaskan tundra, the mother puts up a ferocious fight to save her youngster from an entire pack of hungry wolves.
Patrick Endres / Caters News