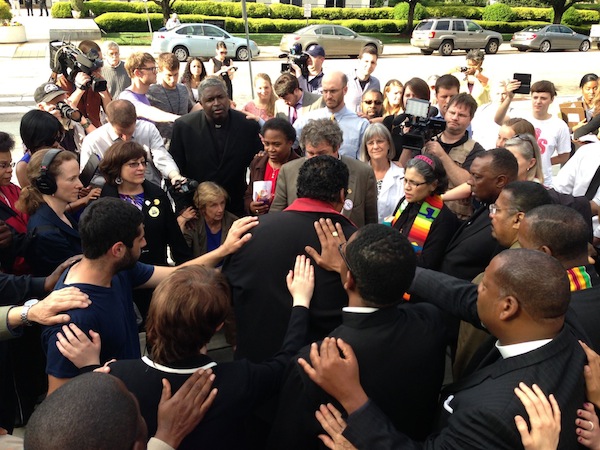 On April 29, 17 dedicated activists were arrested for civil disobedience at the North Carolina General Assembly as they protested attacks on education, health care, voting rights and the poor. Six weeks and six "Moral Mondays" later, nearly 400 people have been locked up, and the nation is watching. This is what democracy looks like. The peaceful protests were started by Reverend Dr. William J. Barber II, president of the North Carolina NAACP State Conference. Rev. Barber has spent decades fighting for the poor and working class in his home state, building diverse coalitions like the Historic Thousands on Jones Street People's Coalition and the Forward Together Movement. Despite name-calling and threats of violence, he has continued to build his grassroots movement to fight poverty, racism and the discriminatory policies of the "Old South". Those coalitions were put to the test when North Carolina lawmakers decided to embrace one of the most radical agendas in the nation. In the space of a few months, lawmakers rejected $700 million in federal unemployment benefits and passed up federal funds to expand Medicaid for half a million people. At the same time, they voted to raise taxes on 900,000 poor and working class people; slash funding for pre-school and kindergarten; and spend time pursuing wildly unpopular proposals, like a bill that would let legislators receive gifts from lobbyists. Then, following a pattern we have seen across the country, they tried to cement their agenda by suppressing the vote. Rather than convince the public to vote for them on merit, legislators introduced a voter ID bill that would disenfranchise nearly 500,000 voters, and planned to roll back early voting, same-day registration and Sunday voting. The community had seen enough. What followed was a textbook example of how grassroots organizing can and should work. In late April, Rev. Barber and the HKonJ coalition organized the weekly Moral Mondays protests at the State House in Raleigh. Next, Rev. Barber engaged the NAACP's broad network of 100 youth and adult units, organizing 26 local protest events across the state. In Halifax County, where one out of four people live below the federal poverty line, locals packed Mount Hope Baptist Church. In the small city of New Bern, more than 250 people packed a community center and cheered two community members who had been arrested at a Moral Monday. Each event made its own point while reinforcing the larger message. Rev. Barber also took the advice of Dr. King: "If you are comfortable in your coalition, then your coalition is too small". The protestors getting arrested each week are from all different backgrounds -- veterans and students, schoolteachers and blue collar workers, professors and doctors, labor and environmental leaders, and clergy of different races, classes, faith communities and even physical abilities. They are unified by shared values and a belief in what Rev. Barber calls "a deeply moral and constitutional vision of society" where "the focus of public policy is justice for all and care for the common good." I was particularly moved by the words of Dr. Charles van der Horst, a white doctor from the UNC School of Medicine who would clearly benefit from the legislature's agenda. He spoke outside the State House last week about the concept of fusion politics: "This is not a black thing, this is not a white thing. This is not a poor thing, this is not a rich thing. This is not a Christian or Jewish or Muslim thing. What hurts one person, hurts us all." Dr. van der Horst is absolutely right, and his message should reverberate on a national scale. North Carolina will not thrive if it insists on selling off the rungs on the ladder to the middle and upper class. In the same way, America will not prosper if our leaders refuse to address wealth inequality and the same attacks on education and voting rights. Luckily, America is listening. The protests have earned growing national press, and last weekend Melissa Harris-Perry devoted a segment of her national Saturday morning television show to the campaign. Moral Mondays have become a catalyst for a broader debate on public policy and the common good. The question is whether North Carolina will listen to its own people. Only time will tell, but as Rev. Barber and the state's activists have proven time and time again, they will not stop fighting until justice is won.

This column is reprinted from The Trice Edney News Wire