Is it ever OK to cheat on your spouse? Is murder ever justified?

You may think your decisions are based on unshakeable moral convictions -- but your moral decisions may be simply a result of where you're looking at a given moment.

According to a provocative new study, eye movements and visual input play a large role in how we deliberate about moral questions.

The new study -- a collaboration between Swedish, British and American researchers -- is the first to suggest that a person's gaze is closely related to the way they make moral decisions, and therefore that a person's immediate surroundings may exert a significant influence on complex ethical judgments.

Say, for example, you've recently decided to become a vegetarian because you believe it is immoral to eat meat. But when you're out at a restaurant, you're tempted to order your favorite meat dish. How do you decide what to order?

"If you're wavering on this decision, something as subtle as the waiter walking up to the table at the moment that your eyes happened to be momentarily resting on the chicken cacciatore menu item (and not on the pasta primavera) could be what sways you into ordering a meal that conflicts with a moral belief you've embraced," one of the study's authors, University of California Merced psychologist Dr. Michael Spivey, told The Huffington Post in an email. "If that waiter had arrived half a second earlier or later, our vegetarian may have been fixating on the pasta at that moment and ordered it."

But what about more weighty moral questions -- like the ethics of murder or adultery? To test how a person's gaze affects these kinds of decisions, the researchers tracked a group of study participants' eyes as they pondered questions such as "Is murder sometimes justifiable?"

Each participant was given the option to answer "yes" or "no" based on what they believed to be morally right. Unbeknownst to the participant, the researchers were tracking the movements of their eyes between two targets -- the word "yes" and the word "no" positioned on opposite sides of a screen -- while they deliberated. When the participant focused on one of the words for a slightly longer period of time than the other, the researchers asked them to immediately call out their decision. 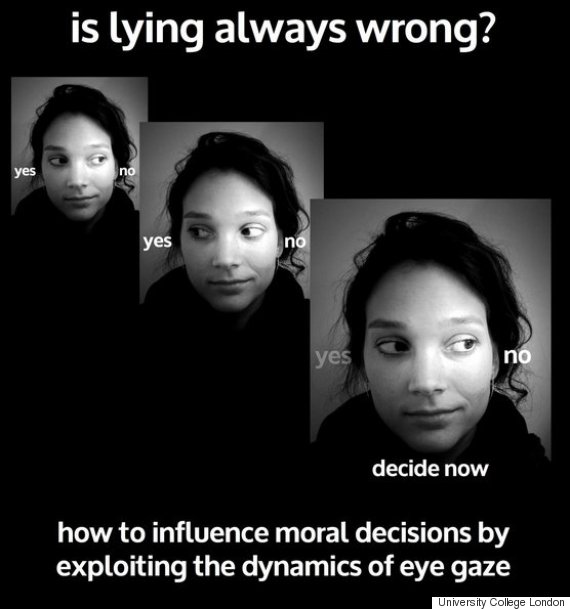 They found that the subjects' moral decisions were significantly biased towards the word that they were looking at at the time of the decision. So if the participant was looking at the word "yes," then they were 8 percent more likely to decide that murder is sometimes justifiable.

Why? It seems that the images of the words "yes" and "no" influenced the participants' thought processes. Our eyes move three to four times each second, and the images we collect at each movement can affect cognition, Spivey said.

"If the dynamics of the visual environment are arranged in such a way as to take advantage of that influence, then the same person could find themselves making a subtly different sequence of eye movements in one visual context compared to another," Spivey said. "That different sequence of sensory impressions could make them produce different answers to the same question, even a question about their moral beliefs."

This suggests that our moral choices are driven not only by our most deeply held ethical beliefs, but also by a variety of other factors -- some of which are outside of our conscious awareness.

"This research demonstrates that many of your moral decisions may arise 'on the fly' as a result of how you look at and interact with your environment," Spivey said. "Like many everyday decisions, moral decisions do not always come from deeply held beliefs in a person's brain, but instead can emerge from the unpredictable momentary interactions between a person and their surroundings."

The findings were published on March 16 in the Proceedings of the National Academy of Sciences.