In these turbulent times, waking up day after day to news of war and strife, death, despair and disaster - not a corner of the globe untouched - it is more important yet harder than ever to find a sense of peace within. Governments fail to act, religion provides no safe haven and the Earth appears to be destroying itself and us with every passing environmental calamity.

As everything becomes undone, how do we find our way?

More than one hundred million people around the world would answer with a name, a person, a faith: Morari Bapu. And Morari Bapu would answer: with Truth, Love and Compassion.

Born in 1947 in a small village in Gujrat, India, spiritual leader Morari Bapu spent his earliest years learning the Ram Charit Manas from his Grandfather and Guru, Tribhovandas Dada. Remarkably, he memorized the scriptures by the time he was twelve and two years later, sat under the canopy of an old tree in the village of Talgajarda reciting the Ramayana to his first three followers. Today, his teachings have reached more than one hundred million people around the world.

Reverently referred to as Bapu by his followers, this humble man's teachings are startlingly simple: to live in adherence with Truth, Love and Compassion. For over fifty years, Bapu has been holding nine-day spiritual gatherings - known as kathas - during which he selects a couplet from the Ramayana and expounds upon its meaning, explaining its relevance for modern day life. In half a century of sharing this wisdom he has held over 700 kathas all around the world, from India to America, Bali to Brazil. Two years ago, at the foothills of the sacred Mount Kailas in Tibet, Bapu held one of the most profound kathas to date. 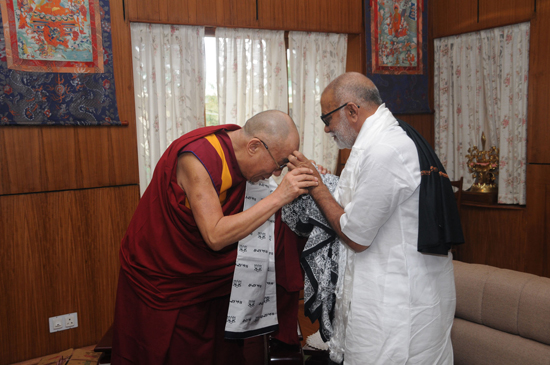 Morari Bapu with the Dalai Lama

Love Is The Prayer

Although Bapu is Hindu and uses ancient Hindu texts to illustrate his teachings, he insists there is nothing religious about his beliefs and calls for acceptance of all faiths. He is refreshingly practical, denouncing religious conversions and complicated rituals, instead urging followers to be open, in head and heart. His openness towards others and their faith is evident in each and every katha, during which he may use an analogy from Christianity, recite lines of Urdu poetry or quote a lesson from Buddhism.

Spiritual lessons are fundamentally inclusive and it's this open, practical approach to living a life rooted in the foundation of Truth, Love and Compassion that millions around the world find so compelling. As today's youth abandon the mantle of religion, disillusioned with illogical decrees and gratuitous righteousness, it's no surprise that Bapu has so many devout, young followers. Free from the binds of religion, Bapu's teachings allow them to soar.

In person Bapu is very quiet and incredibly serene, yet in katha, on stage in front of thousands, an extraordinarily exuberant man appears. In his quest to make the lessons of the Ramayana relevant and modern, he will at times use a humorous analogy or anecdote, causing ripples of laughter in the sea of people sitting at his feet. Throughout katha he will spontaneously break into song, his traveling musicians accompanying him and his followers rising to dance, their arms in the air, smiles on their faces. This ability to simultaneously share profound wisdom and ebullient joy is a rare and special gift. In essence, katha teaches you to love and that love is the prayer.

The Business of Spirituality

Given India's long and complicated relationship with spirituality and enterprising Gurus, it is important to note that there exists no Business of Bapu. While it would be effortless to build a brand and business around Truth, Love and Compassion - as a handful of infamous Gurus have done for themselves - Bapu has not and is adamant that he will never. As other Gurus court the press, whipping up spectacles of spirituality and funnelling millions of donation dollars into business empires, Bapu remains steadfastly quiet, nearly absent from the media and resolute in his refusal of donations, instead urging followers to do good in their own way.

On his own terms, Bapu finds myriad ways to give back. He quietly provides free education to young students and free healthcare to thousands in Talgajarda, and is a proud and passionate supporter of Indian art, literature and culture, giving away dozens of awards each year to artists and scholars in Gujarat. Bapu considers himself a simple man, with only wisdom and love to share, and while many of his followers speak of his divinity, it is his actions that exemplify his humanity.

When Bapu is not in katha, he can almost always be found swaying gently back and forth on a swing, whether indoors or out. While he admits the feeling itself is pleasant, he explains that the swing acts as a constant reminder that life moves forward and back in equal measure, the inescapable pendulum between hardship and success, love and loss. Freedom is found through Truth, says Bapu, and knowing that life will always oscillate in this way is, in fact, incredibly freeing.

The world is an increasingly unstable place, the future uncertain, both gain and loss in life assured but if we can strive to live each day with a dedication to these three fundamental principles - Truth, Love and Compassion - for ourselves, for each other, for the Earth - what more could ever be asked from us? These principles are, in fact, the only everlasting guide we have on this journey called life. 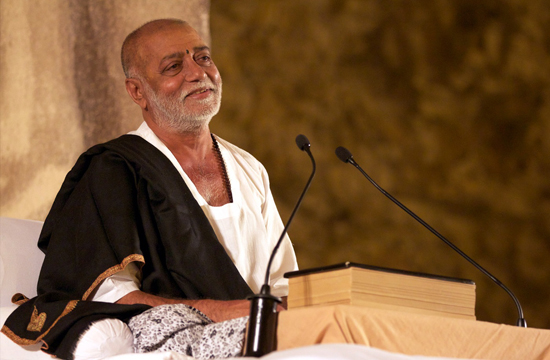 Morari Bapu and the Dalai Lama in Dharamshala

Marissa Bronfman is a writer, journalist, editor and digital media consultant living in Bombay. She is the Founder and President of Moxie Media, a boutique consulting firm that assists fashion, luxury lifestyle and travel companies in translating and building their brands in the digital space. Read more at marissabronfman.com