What Donald Trump has convoluted for expediency or perhaps by ignorance is whether his disregard of the "politically correct" translates to flushing the Constitutionally correct? Without absorbing that the Constitution is the foundation of the United States, it is pointless to claim to be an American, except perhaps by coincidence of birth.

America's Founding Fathers could be accused of being elitists, to a degree; nonetheless, they foresaw a country that would grow as a land for all, even as slavery may have blinded some to the future. Most critically, the Founding Fathers engraved a system of government and rights that would protect it from narcissists who would dismantle the very country they would lead -- as Trump would be President under the banner of "make America great again," but in that simple rhetoric would flush the substance. 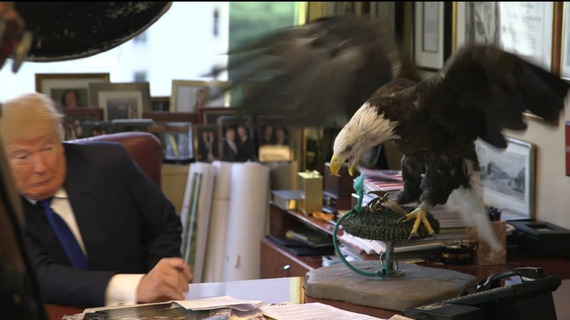 Who is the Authentic American?

Is it about birthright or the values we support? If it's a matter of birth, well then only Native Americans can truly claim to be the original or authentic. All the rest of us came here seeking refugee from political or religious persecution. Some were escaping poverty or seeking economic opportunity. Unfortunately, some came here not from their own will but as slaves -- some made the journey but never arrived.

For my part, I came here to be an American as a young boy and then chewed and consumed the nutritious ideology of the Constitution. (See: "Growing Up a Patriot".) When the most unlikely of circumstances brought me to the position of leading the diplomacy of a reborn Bosnia & Herzegovina, I considered the U.S. Constitution as a foundation and America as an ally for the future. Perhaps it may have been a leap too far, but the Founding Fathers were inspired by an Enlightenment born in Europe, influenced by a global perspective and envisioned to prosper and not suffer its diversity -- that is also Bosnia. (See: "Can Bosnia's Army Save the World?")

Which Flag do you think is being honored and which one dishonored here? 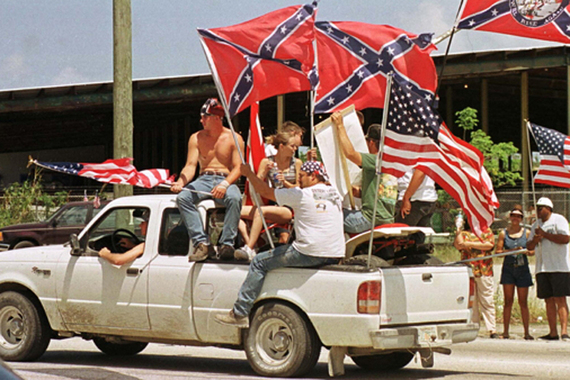 In the America that lives up to its promise, we may not be united by our politics but by the respect for the other. Diversity is not merely to be tolerated but a source of prosperity. The deviant may be the entrepreneur as well as cultural pioneer. Whether you recognize it or not, that is what unites LGBT with Muslim, the Buddhist with Jewish. the Christian with atheist. Those who have sought to broaden the appeal of these American values within our borders and beyond are making America great, Jefferson to Lincoln, Ali to Fonda, Gates to Zuckerberg. (See: "From #"SocialNetwork" Jerk to Model for Social Responsibility Entrepreneur").

Those who seek to narrow America's opportunity and appeal are impostors or worse. There's not the American flag but the Confederate one, which sought to divide and dissolve the United States. The Confederate flag was invader as well as seeking to define members of our American society by race and deny the foundation, "that all men are created equal, that they are endowed by their Creator with certain unalienable Rights."

The principles now espoused by ISIS have been cultivated for some time within America's borders, but not by any refugee, immigrant or Muslim. The notion that some are entitled by Divine Authority to wage war, exterminate, enslave and/or deny "unalienable Rights" to others has been employed under various banners.

Even when America has sought to return to the principles upon which it was founded, others have sought to transform this country into one defined by race, religion, or economic class - something distinctly rejected by our Founding Fathers. The most noxious of these mockeries of America have been pursued under the Confederate flag, then and now.

While Americans were murdered in San Bernardino in loyalty to the ISIS flag, many more Americans have been killed under the banner of the Confederate flag, most recently in an African-American church in Charleston. 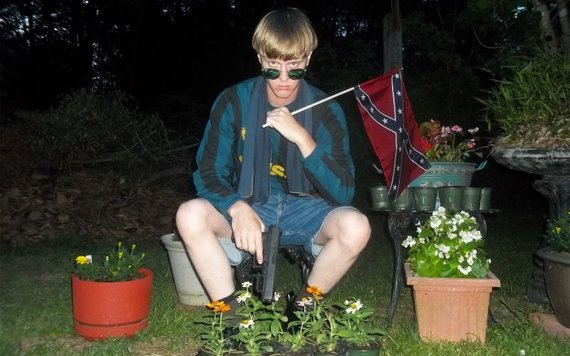 Some have sought to explain Trump's appeal as being a symptom of anger at Washington. Plainly, this is too kind of a characterization.

Perhaps some Americans are angry at losing jobs to overseas producers or income inequality evidenced by lower employment benefits and real pay. However, the persons most responsible for this downward draft are billionaires like Trump or others who seek to buy US elections via "Super PACs."

Perhaps some Americans feel vulnerable to the threats of terror or other ultra-nationalists as Vladimir Putin. However, has America ever been more an impregnable fortress than now?

Trump does embody anger though at "the other." He trumpets that "we can no longer afford to be so nice." That summarizes his proposal to ban Muslims from the US and build a wall along America's borders. The fear mongering ignores that more Americans are killed within our borders by white supremacists' inspired terror rather than radical Islam or that the US is enriched by the labor and talents of immigrants, Latin or Asian or European.

What most of Trump's supporters are angry about is that the US populace no longer looks so much as they believed it did in their imagination. There is perhaps more of a tint but then it was the Asian laborer or Latin farm worker or Black slave that always was part of the sweat that built America. It was the Native American that came here first.

What is different now is that all of these constituencies of the ever-present American mosaic are demanding a political voice, sometimes even in their native tongue. It is no coincidence that Trump who questioned Barack Obama's birthright to the Presidency, (how ironic that he has success in employing similar tactic against another wall builder as Ted Cruz), is now leading another crusade of seeking to block the American rights of the other who somehow do not fit the stereotype of who belongs.

Ask Beijing how successful inner and outer walls have been in keeping out the invader or perhaps blocking China's own advance?

(In effort to project America's strength and exploit Eagle as image, the parody is revealed)

Arianna Huffington recently lamented the mainstreaming of "extremism" via Donald Trump's campaign and media coverage he received as a presumably mainstream candidate. She also correctly pointed out that Adolf Hitler was first elected to power. Unfortunately Donald Trump may not be just leading a dark mood but channeling it from a segment of angry America.

Trump is not leading us back to America's greatness or foundation established by our Founding Fathers. He would dispose of the Bill of Rights with a series of theatrical flushes and fear -- the Second Amendment would eventually be no less prone to being erased than the rights of any who are defined as the other and do not parade in goose step behind the new leader.

Trump would embrace Putin and any despot who could not be swatted away. Allies would be defined by their willingness to go along and not by shared values or commitment to the rule of law or global peace and prosperity. I still believe in American exceptionalism, and that starts at home with defending the foundation of a free and inclusive society. America is made richer, and yes greater, by our support for the broadening of such values among global citizens, and it's best undertaken by example. Donald Trump may be a comic parody but he is a tragedy for America's future as he mocks our legacy and values.