By Hong Soon-do, Beijing correspondent, AsiaToday - It has become increasingly popular among unmarried women in China to go abroad to freeze their eggs. Besides, this trend is expected to become a matter of course in the future.

According to the September 6th report of Chinese internal newspaper Cankao xiaoxi (Reference News), at least thousands of Chinese women are heading to the United States and Canada to have their eggs frozen. Among them is Lu Yi, a Chinese woman who has a business degree from Stanford University and works in a renowned foreign-affiliated company in Beijing. Although she is in her mid 30s, she hasn't found her marriage partner yet. Nevertheless, she doesn't want to live alone for the rest of her life. The problem is the fact that she may get married and have children beyond her 40s. If this is the case, she should deliver a child in her old age. Then, egg freezing can be her choice. In fact, she actually did it. Recently, she visited a hospital in California, where they retrieved eight eggs from her body. 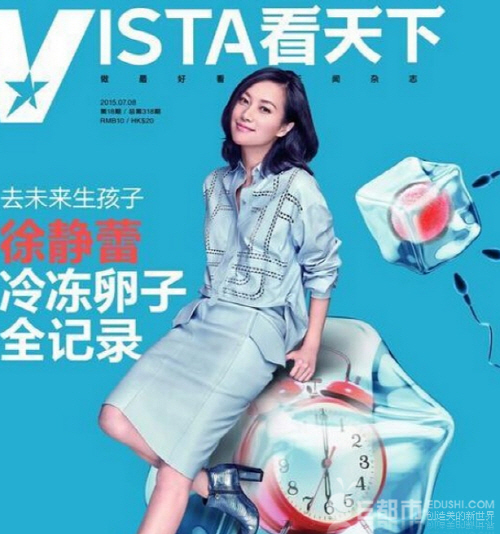 [Chinese actress and director Xu Jinglei admitted that she had her eggs frozen. She revealed the whole process of egg freezing./ Source: search engine Baidu]

Among them are also considerable number of celebrities. Chinese actress and director Xu Jinglei is one of them. In July 2015, it was revealed that she had gone to the United States to have her nine eggs frozen. When the rumors spread, the actress admitted it. Apart from her, other well-known celebrities including Ms. L and K are embroiled in egg freezing rumors, and most of the rumors seem true.

There are reasons for an increasing number of Chinese single women traveling abroad for the procedure. One of the reasons is their eagerness to have children regardless of their marital status. China's not so negative view on single mothers can be another reason. But the biggest reason is the country's strict family planning laws that categorize egg freezing as illegal. Furthermore, this restriction is unlikely to be removed for some time. It seems clear that travelling abroad to have their eggs frozen is about to hit mainstream among single women in China.