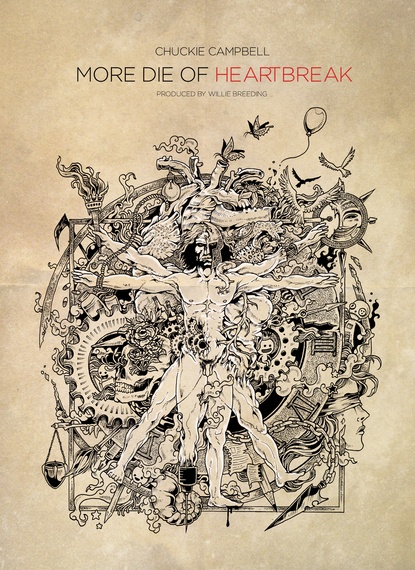 Chuckie Campbell recently re-introduced himself to the world of Hip Hop. What kept him silent for awhile was an attack on him by none other than his best friend -- leaving Chuckie's jaw wired shut. Tragically, the incident would be followed by the suicide of his attacker, Ralph Prater, who was also a lover of rhyme. Now back in the loop with his new album, Campbell is re-living the heartbreak of what may have led to the demise of his friend.

What's different about this rapper compared to others? He is also a professor who teaches English at Bryant & Stratton College in Buffalo, NY. Hence, what he brings to the plate of hip-hop is his love for the intellect. The name given to this endeavor More Die of Heartbreak honors the literary work of Saul Bellow but doesn't impersonate any of the characters in the novel. Campbell's work, however, attempts to tap into the condition of the human heart with all its shades of darkness and promise of hope despite attacks by those we trust.

A peek at the cover art of this new effort prompts one to recall the Vitruvian Man -- Leonardo di Vinci's pen and ink translation of idyllic proportions. And one would expect that Chuckie Campbell's rhymes would build on the beauty of this theory. But here, the onus is on the audience as to whether Campbell achieved this or not. His listeners may find the lyrics too lengthy and possibly too convoluted with no clear objective except perhaps that the external world is not beautiful -- it's unkind.

Chuckie Campbell grew up in Buffalo, NY where city life became the archetype for issues such as domestic violence, substance abuse, racism, heartbreak and suicide. So, one may wonder, how did this rap artist get from the harshness of the city to the world of academia. His answer: hip hop, luck and athletic scholarships offered him an opportunity to enlarge his world views.

Like most rappers, Campbell speaks about his life's landscape, the dark and daunting, through a labyrinth of expressions. The album is not shrouded in hard beats, snares or claps; instead the sweet sound of strings or piano hovers in the background, soothing the pain in Campbell's spoken-words. The sweet and the real arrive poignantly on "Synesthesia" where Campbell spits a moral statement about the didactic role of color accompanied by an easy-on-the-ear piano. When varied beat arrangements do show-up in Campbell's music, the cadence is rather placid and not at all danceable. "Behind Her Eyes" is one of those songs on the album that plays with atmospheric arrangements by incorporating the flux of strings, piano and mellow beats.

But, there is no doubt that the undercurrent and perhaps the main catharsis for this album was the assault that left him voiceless, and the subsequent suicide of his best friend, Ralph Prater. The story is told on the eighth track entitled "Deus Ex Machina", where Campbell maps out the history of his friendship with Prater, the brutal assault on him and the uncanny suicide of his friend.

Faced with what seemed to Campbell an unforeseen event in his life, and to bring the tale to a happy ending, he hangs-on to what he knows best -- his rhymes. The problem is that Campbell lingers on too long with each track and is at risk of losing the attention of his audience. But who knows -- perhaps there is some beauty to be heard from a rapper who tells a long story.

You can listen to Chuckie Campbell's album More Die Of Heartbreak on Soundcloud and BandCamp.